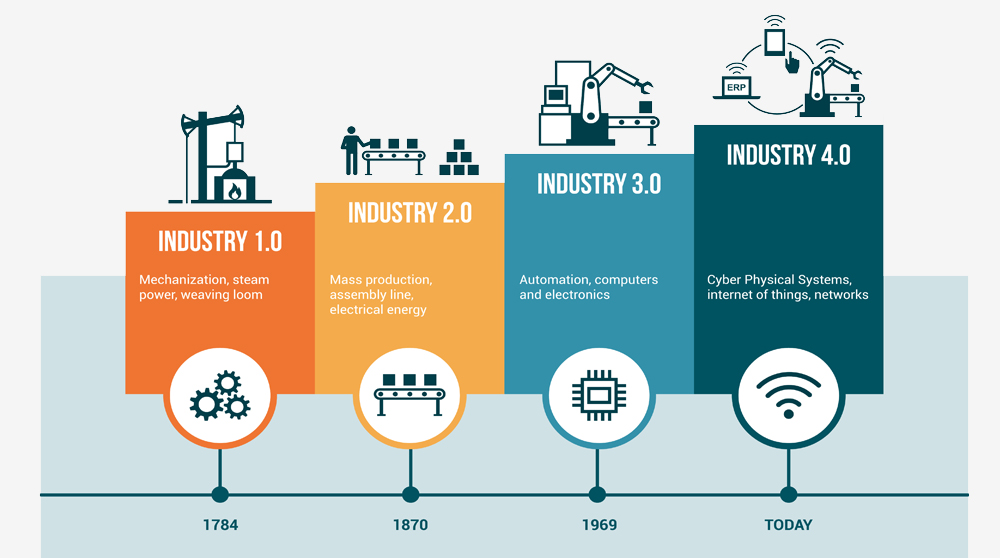 Sometimes you don’t notice that you’re part of a revolution: Part #1 in our new 3-part blog series.

When I talk to people, smart people, I ask them, “Do you feel the revolution?” They generally respond with “What on earth are you talking about?” But we are in the midst of a huge revolution that is changing our life dramatically, primarily our consumer habits. In many respects, the industry 4.0 revolution is a game changer.

Imagine the life of a person in the early 18th century. When they wanted to buy shoes or a shirt, they went to the shoemaker or to the tailor to be measured so that the craftsman could prepare the item according to their size.

With the adoption of the steam engine in the late 18th century, mass production resulted, and with it, the ability to produce goods more effectively. And, in the 19th century, when electricity was invented, even better and cheaper production became common. Then, in the 20th century, with the introduction of computers, we thought that the industrial revolution was complete — there was no way to be more effective than we already were.

But then came the Industry 4.0 (i4.0) revolution, which is changing industry in a way that people hadn’t imagined was even possible. Unlike the Industry 1.0, 2.0 and 3.0 revolutions, i4.0 is not defined by a single invention, but rather by a combination of interconnected components.

In the following articles, I will focus on three of them:

These topics will be the focus of this series, although there are additional defining characteristics that are part of this revolution, such as the digital twin, additive manufacturing, augmented and virtual reality and others. In this chapter I will cover the first topic, robotics, and machine-to-machine (M2M) connectivity.

As mentioned above, computers have been part of industry since the i3.0 revolution. However, the computers were managed by humans, who, by definition, could lose focus, get sick and make mistakes. i4.0 introduced a new concept: if computers can run the operation, why can’t they manage the operation as well? If computers can raise alerts about issues in the production line, why can’t they solve those issues? Therefore, i4.0 has made it possible for machines to communicate with other machines or robots about the situation on the line. Robots can now supply materials and take action on the line to reduce the need for human involvement to a minimum.

Let’s look at an example from the food industry. We could teach a machine (computer or robot), that after producing 1000 packages of dark chocolate, it should move to white chocolate production. If in the past, the machine would stop production after 1000 items, and wait for a human to load a new program and the relevant new ingredients, the computer can now load the new product and program itself, robots and AGVs can bring the ingredients from the warehouse to the shop floor, and the factory can be managed autonomously, without the need for human intervention.

It sounds magical, but it is also very practical, especially during a pandemic. Factories that operated this way were able to stay operative, even during lockdowns, as no people were needed on the production floor.

Stay tuned for the upcoming posts on:

which will be published over the next couple of weeks!

So much data, so much potential February 22, 2021 Part 2 of our 3-part blog series about Industry 4.0. In our previous post about Industry 4.0 (i4.0), we discussed…
Tired of tweaking and debugging your parts library? Try… May 16, 2022 Blog #8 in a 12-part series covering the Digital Twin Best Practices in Electronics Manufacturing mini-webinar series by Jay Gorajia…
The challenges facing SMB electronics manufacturers December 19, 2022 A four-part series by guest author Marius Stepanescu, Technical Director at ICCO EMT Small-to-medium-sized (SMB) electronics manufacturers in the electronics…

This article first appeared on the Siemens Digital Industries Software blog at https://blogs.sw.siemens.com/valor/2021/02/15/revolutions-are-only-visible-in-retrospect/