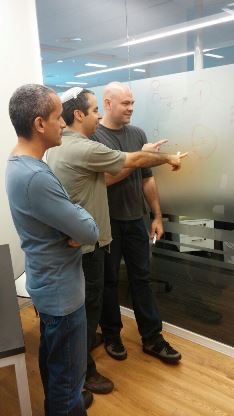 To better understand the vision of turning the Siemens PLM Software Business Unit from a software production company to the concept of working like a startup, we sat with Zvi Feuer, Senior VP of Manufacturing Engineering Software for Siemens PLM Software, a BU of the Siemens Digital Factory Division.  The interview is presented in a series of five blogs.

Looking back more than six years when I started in this position it was clear that we needed to make changes. To change from a software factory delivering every eight months, or to use a better metaphor, instead of being one large cargo ship delivering one time, at one port every eight months – turn that into small independent boats, delivering more frequently. At the beginning, we reduced it to once every six months, then further to once every three months. But the final goal is to release every two weeks, though it’s taking more time than I had thought, still we’ll get there, to release every two weeks.

I knew we needed to get a new location and to build interdisciplinary teams – we call them Startups (SUs), and we assigned managers to each SU, gave them independence, with the ability to lead.

You know, it took more time than I initially thought to change the organizational structure, build the SUs, do the training, to make the move to the new concept. The move to Agile or Lean was only part of the goal. The goal of Agile/Lean is reduction of waste.  An example of waste – you spend half a year deploying a feature that in the end wasn’t desired or required, so you created waste, since in all that time you could have been making something else, with a purpose.

One of the nice things about Agile software development is, not just that you’re working on small versions, but also you’re working facing the customer, enabling you to get direct feedback for what the customer or category of customers need. So when you do make something, it’s going to more or less address the actual need, there’s much less room for wasted effort, for making what’s not needed. Also it allows you to be much more flexible since the customer may not need everything you had planned to develop, they may not need the whole version, or all the versions.  It helps to set priorities, and to eventually become more precise, and so reduce waste and free up more resources to accomplish more things, that before you were unable to do.

When I began managing the business, we would spend six months for design, six months for development and another three to four months for QA. If you spoke to someone, to ask them to add something new, not on the current list to do, the reply was, ‘give me additional resources in order to do it.’  Resources existed here, but were partially engaged in waste, or, in some parts of their work weren’t achieving the target. The Agile approach is not just the method you use to develop, or Scrum teams, and shorter cycles, the Agile approach dictates that you don’t develop anything without the customer at the other end, and guard the quality of what you produce. Another problem with the previous methods, after you developed something for half a year and then threw it over the wall to the QA checkers, it’s going to have a lot of bugs in the program.  It needs time to fix, and some of the people who need to fix it have already moved on to something else entirely, which impairs your ability to assure the quality. Agile team in actionBut now we’ve achieved a huge improvement in the quality of the software we’re releasing. It’s so improved because, 1) everyone can check their own work, and 2) now not much time elapses after development, so when QA is underway, the R&D person is still in the development cycle, so he or she can still remember exactly where they caused the problem and knows exactly where and how to fix it.

About the author
Zvi Feuer is senior vice president of Manufacturing Engineering Software for Siemens PLM Software, a business unit of the Siemens Digital Factory Division. He has more than 25 years of experience in Enterprise Software business management, with a primary focus in the Manufacturing Industries. He has worked for: the Israeli Aircraft Industries (IAI); Digital Equipment, a leading provider of hardware and system integration projects; and since 1995, with Tecnomatix, UGS and Siemens. Feuer’s current responsibilities include leading global teams and initiatives to develop and service customers worldwide and providing Manufacturing Engineering Software solutions. These solutions include optimizing production and service facilities, assembly line design, developing and validating production systems and programming CNC machines in major machine shops. Feuer received his Master of Science in industrial engineering from Technion – Israel Institute of Technology, and also received an executive MBA from UCLA – NUS.

This article first appeared on the Siemens Digital Industries Software blog at https://blogs.sw.siemens.com/tecnomatix/interview-with-zvi-feuer-part-1-the-turn-to-agile/