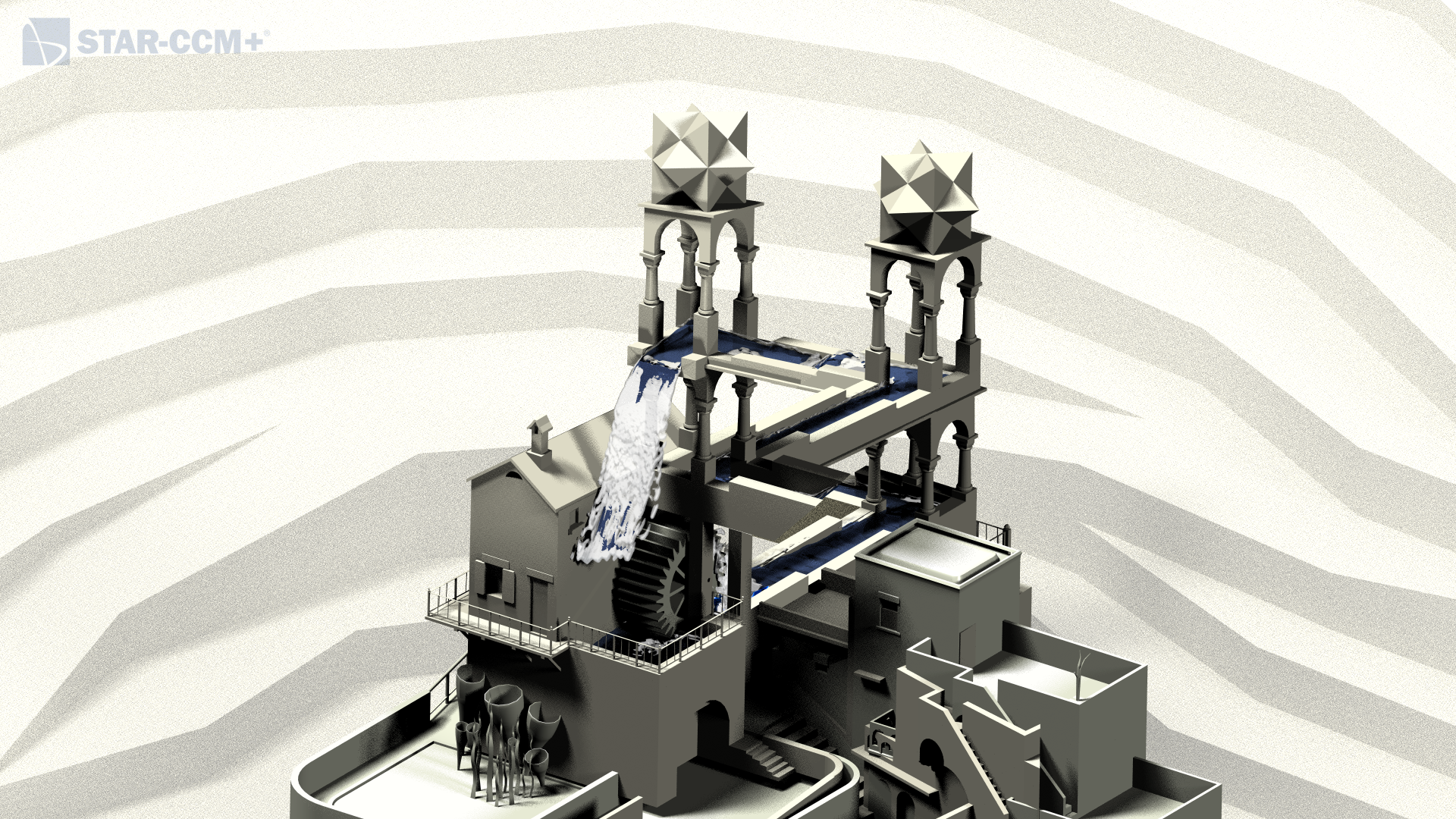 said an inner voice to me, “it harms Navier-Stokes, it harms continuity, it harms third law of thermodynamics and god knows what else it harms! You cannot do this. It’s a trick! ” It was the rational, all-negative-grumble in me that talked!

“Well, we’ll see, my friend!” the rebel-part in me responded and neglecting good old crabber for a moment I went upstairs to my office where the old books catch the dust.

Among those was an 800-paged brick of paper that was scary even if you just looked at it. It was still there from University times when it was a common practice among my mates and me to show-off talking about super-philosophic books we actually never read.

“You talked about books you never read? What a super-embarrassing and ridiculous nerd you were!”.

“Well, maybe”, I said to the crabber in me and took the book out of the shelf remembering it might help to

do “the weird thing”.

The beast was called

and the cool thing about the book I never read was that – though it – as far as I had heard – was a truly tough read, it had pictures in it. So, I started a deep dive image subtitle study and stumbled across some interesting hints:

The first guy mentioned in the book’s title – Gödel, an Austrian mathematician and philosopher – proved the following: Imagine a mathematical system with first principles aka axioms and the derivation of true sentences based on clearly defined mathematical rules: Now, luckily the author of the book makes it understandable for a poor-men’s mathematician like me: those axioms are the trunk of a tree and each derived sentence yields a branch, based on which further branches can be derived which then have further branches etc. pp. The genius proof of Gödel was that regardless how fine your re-branching becomes you will never be able to fill the complete space the tree is embedded into (in math words you end up with some fractal structure). Gödel was able to proof that those gaps between the branches leave the mathematical space for things that might be part of a holistic truth but are neither to be proven nor to be falsified from within the initial system of axioms.

“Hope Hofstaedter* or any other mathematician does not read this”  the crabber went  “he will probably throw his hands up in horror reading that summary.”

“Why don’t you go downstairs and get me a coffee, I am explaining something here.”

So, another consequence of Goedel’s finding seems that if you start from the axioms and follow the rules of your system you might end up at the start of your journey.

“You mean like you in the old times doing those mathematical derivations and ending up back at 0 = 0 after pages of manipulations, instead of getting your homework done?”

Now, comes the cool thing and this is what I was after: In Goedel, Escher, Bach there is a chapter about

one of the masterpieces of Escher, a dutch artist famous for his mathematically inspired woodcuts. This artworks visualizes the Goedel principle in a way that had always fascinated me: The water runs in circles and no matter how hard you try you don’t get it – Why the heck is that thing flowing “downwards” all the time? What’s wrong with the laws of gravity in that picture, where does Escher harm the Navier-Stokes Equation?

Well, you stare at it for a minute

“you are staring at this for an hour now!”

“What if I just ignore you for a bit…and by the way where’s my coffee?”

and you start to understand Escher plays some tricks on you with the perspective. The arrangement of the columns somehow doesn’t make sense. The channels the water runs on somehow point downwards but effectively lead upwards. The fascinating thing is:

If you don’t change your view on the problem

and in this particular example it’s literally the viewing angle, you can spend ages

you can spend ages, staring at it and you somehow don’t get it ultimately.

you will be caught in a trap.

You will be lost in a system of seemingly true axioms and sentences, but you will miss the ultimate truth outside that system. You will feel that everything runs smoothly following that water-stream step-by-step while you fail to realize that things run up the hill during some period.

Now you might wonder, why do I tell you all this philosophic crap in a Simulation blog

“I guess they all do! Get to the point… I told you it’s useless. It’s impossible!”

We are all facing the “Waterfall-trap”

It’s there all the time in our business models, in our private lives and…in our simulation workflows:

For a long time the business model of selling Diesel powered cars as the clean holy-CO2-grail and trying to “somehow” get around the emissions topic worked out, everything was running well from a business perspective… it looks like nobody creating that model dared to look at it from another angle. Until, yeah, until somebody else rotated that scene from the outside.

Anytime we build a model we make early decisions on the level of abstraction/simplification. Then we run our models and everything that comes out of those simulation is – convergence premissed – true within the system of initial axioms. It is a 100% consistent solution. But there is NO single guarantee, that it is the truth. “Take what’s fastest, it’s all wrong anyways, a colleague of mine once said.” Well, maybe that’s not 100 % true, but we should be clear: we interpret the results within the system of axioms we defined a priori. Needless to say, it is essential to challenge those early axioms by looking at our models from another – critical – angle. That’s when you go ask a colleague, that’s when you question your first results, and that’s when you ask the guy that delivers the ultimate truth…reality aka. Nature aka. measurement. We typically call this Validation! The successful (simulation) engineer always questions what he is doing. He always rotates the scene, he always validates, in particular when things seem to run too well.

And by the way, so should the experimentalist do. Just because an experiment always gives “the right” answer, it only gives the answer to the question that you defined a priori – by your experimental setup and care. The biggest waterfall trap in experiments is if you asked a different question than you believed you were asking. That’s the classical moment when the simulation engineer gets a different result than you as the experimentalist, because your geometry or operating condition or measurement location was not the one you thought it was when you handed over the results data.  Which by the way was undoubtable the right answer from nature but, to another question than you thought.

of course, there is a second more fun reason why I tell you all this in a simulation blog:

Escher’s Waterfall is made to be explored by CFD!

“Pahhh! I knew it, I knew that’s what you plan, you’re so naive”

So here I am standing now talking to my grumpy inner me as it’s the first time since university that I’ve taken Gödel, Escher, Bach out of the book shelf. I hold it in my hands and stare at the cover when I recall that another fascinating fact about the book I never read is that it has been composed such that the reader – as he starts from page one and works himself through the chapters- will seamlessly be brought back to the very beginning of the book as he finishes it. That moment I take the book and – not reading any further line – put it back into the shelf and with confidence I think to myself:

“Well, whatever! Here’s your coffee, Einstein! I still believe

“It depends, on the perspective.”  If you really want to, end the mystique romantic illusion by opening the below.

4 Myths about AI in CFD April 6, 2021 As Artificial Intelligence (AI) has become more ubiquitous in our everyday lives, so too has confusion about what it is…
10 insights from rocket CFD for a mind-blowing moonshot July 29, 2021 This is your guide to a successful moonshot project - with 10 insights that only rocket CFD (Computational Fluid Dynamics)…
10 secrets to a stunningly fun CFD simulation November 20, 2020 What is the secret of those masterpieces of fun CFD simulations that inspire the masses?

This article first appeared on the Siemens Digital Industries Software blog at https://blogs.sw.siemens.com/simcenter/solve-the-impossible-the-hard-ones-are-already-solved/