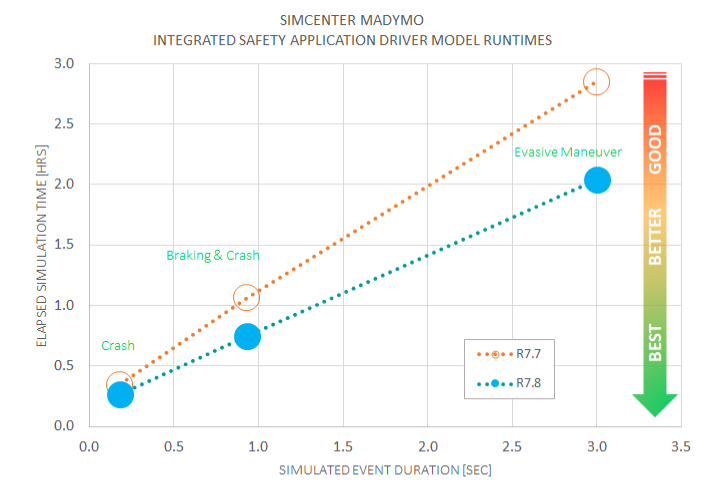 With the improved core of the code, Simcenter Madymo solver run times can be reduced by 28%, compared to the previous version. A typical crash analysis in Simcenter Madymo may take about 15-20 minutes whilst the same in a Finite Element (FE) code could take several hours. When using the Active Human Model, the simulation time of a 3 second event will take approximately 2 hours to complete. Active Human Model simulation time of events of up to 3 seconds will take approximately 2 hours to complete.

Continuous Automotive Test Innovation within Simcenter… November 26, 2021 Simcenter Madymo road scene Siemens Simcenter Madymo has been awarded the ‘Crash Test Innovation of the Year’ for 2021 by…
4 Myths about AI in CFD April 6, 2021 As Artificial Intelligence (AI) has become more ubiquitous in our everyday lives, so too has confusion about what it is…
What's New in Simcenter 3D 2021.2? June 22, 2021 Learn more about Simcenter 3D 2021.2: enhanced auralization, improved turbomachinery analysis, new material models & multiple tabbed windows.
This article first appeared on the Siemens Digital Industries Software blog at https://blogs.sw.siemens.com/simcenter/simcenter-madymo-announces-the-7-8-release-improved-solver-run-times-by-28/