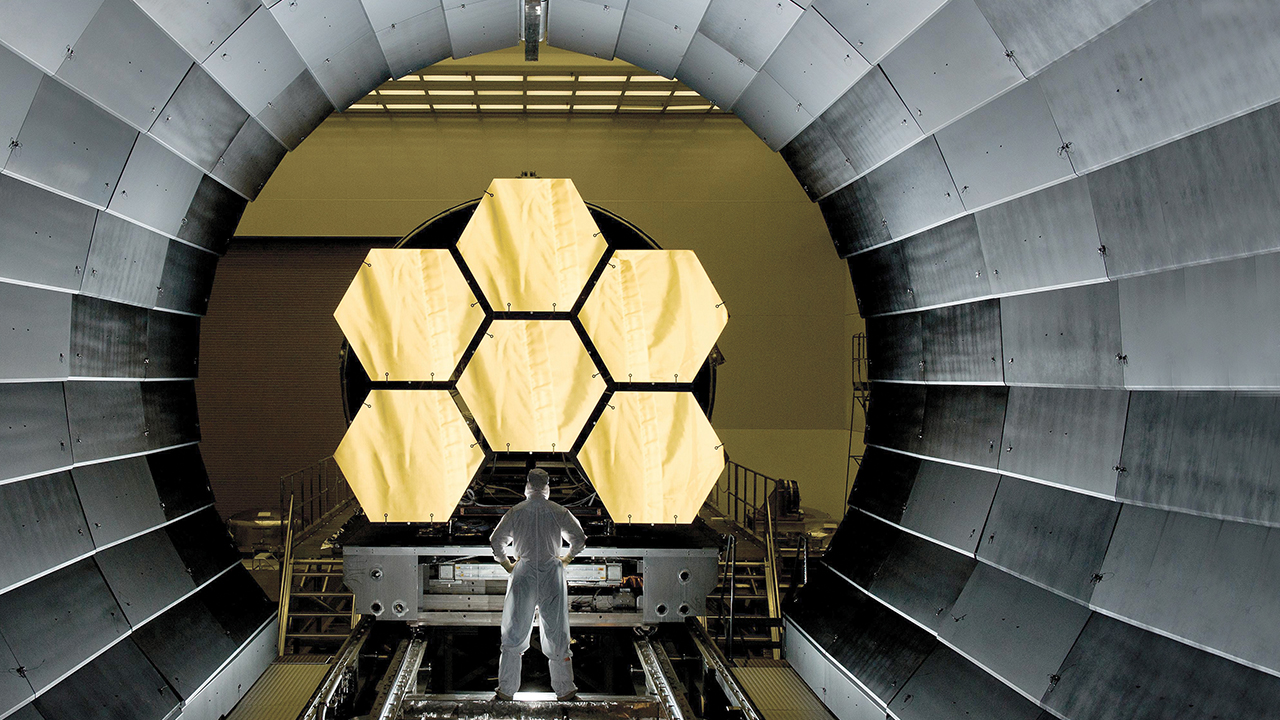 The world’s largest and most powerful space science telescope is finally scheduled for launch, on Christmas Eve. The James Webb Space Telescope (JWST) has been in the works for decades, and its gold-plated, 21-foot mirror is capable of exploring much farther out into space than its predecessor, the famous Hubble Space Telescope. After many delays and years of waiting, for many, it seems almost unbelievable that it’s finally about to happen.

Set to launch to deep space on December 24, the nearly $10 billion NASA-built JWST promises the ability to peer into the depths of the known Universe like never before.

The Webb mission, an international partnership with ESA (European Space Agency) and the Canadian Space Agency, will explore every phase of cosmic history – from within the solar system to the most distant observable galaxies in the early universe, and everything in between. Webb will reveal new and unexpected discoveries and help humanity understand the origins of the universe and our place in it. The new observatory has been designed to look deeper into the Universe than its predecessor and, as a consequence, detect events occurring further back in time – more than 13.5 billion years ago.

Scientists also expect to use its more advanced capabilities to study the atmospheres of distant planets in the hope that signs of life might be detected.

“Here at Siemens Digital Industries Software, we are excited to watch the upcoming launch of the JWST,” said Mark Sherman, Director of Simcenter Femap Software Development. “Our involvement in this historic undertaking has been detailed in numerous customer presentations and papers, and we have been privileged to work with a large number of Simcenter Femap users at different entities over the years involved in the simulation of complex parts and systems in support of the Webb mission.”

Considered to be the next generation – not the replacement – of the Hubble Space Telescope, the JWST is an infrared telescope that enables the viewing of more distant, highly redshifted objects. The Hubble is used to study the universe in optical and ultraviolet wavelengths. The JWST is also astronomically larger than Hubble, which is about the size of a large tractor-trailer truck. At 22m x 12m, the JWST is almost as large as a Boeing 737 jet.

NASA and ESA released pictures on Saturday showing the moment of Webb’s encapsulation.

The giant fairing that will protect the telescope as it climbs through the atmosphere was lowered into place with the aid of guide lasers.

The pictures are the last we will see of Webb and its golden mirrors on Earth. The next time we’ll get a view of the observatory that has taken 30 years to design and build will be when it comes off the top of the rocket at the end of its 30-minute ascent.

A video camera has been installed on the Ariane to show the telescope moving away into the distance to begin its mission. According to BBC, engineers had put the launch on hold for a few days while they investigated a troublesome communications cable carrying data from Webb to ground-support equipment. Once this was fixed, the final “aliveness” tests on the telescope’s subsystems could be run.

In order to make critical course corrections shortly after launch, to maintain its prescribed orbit nearly 1 million miles from Earth, and to repoint the observatory and manage its momentum during operations, Webb was built with a total of 12 rocket thrusters. These rocket thrusters use either hydrazine fuel or a special mixture of hydrazine fuel and dinitrogen tetroxide oxidizer.

Webb’s spacecraft bus, built by Northrop Grumman, was filled with 369 pounds (168 kilograms) of hydrazine fuel and 292 pounds (133 kilograms) of dinitrogen tetroxide oxidizer. Both fuel and oxidizer will be used together to maximize power for the biggest “burns” by Webb’s Secondary Combustion Augmented Thrusters, which are for mid-course corrections and inserting into L2 orbit, as well as for orbit maintenance around L2 during the mission. However, hydrazine alone will be used for the small “burns” by Webb’s tiny precision Monopropellant Reaction Engine thrusters, which are used for large-angle repointing and for managing spacecraft momentum.

Webb is targeted to launch at 7:20 a.m. EST Friday, Dec. 24, on an Arianespace Ariane 5 rocket from Europe’s Spaceport in Kourou, French Guiana, on the northeastern coast of South America.

If bad weather or minor technical issues intervene, there are launch opportunities on December 25 and 26, after which teams would have to stand down for a day to allow production of hydrogen and oxygen propellants at the spaceport to catch up.

“We reproduce the oxygen and the hydrogen on the spot and we have the capacity for three full fillings [of the Ariane rocket],” explained Daniel Neuenschwander, the director of space transportation at ESA.

The Ariane carries a number of modifications for the upcoming flight.

In particular, special vents have been put in the sides of the nose cone fairing to ensure there is an even loss of pressure during the climb to orbit. This will ensure there is no abrupt change in environment that might damage the telescope when the fairing panels are discarded, according to ESA.

The rocket will throw Webb on to a path that will take it to an observing station some 1.5 million kilometers from Earth.

This journey should last a month, during which time the telescope will unfold its 6.5m-diameter primary mirror and the tennis court-sized shield intended to protect its observations of the cosmos from the Sun’s light and heat.

The JWST will has a “hot side” and a “cold side”, with the hot side consisting of the observatory spacecraft, which manages pointing and communication, and a shield that blocks heat and radiation from the Sun, Earth, and Moon. The cold side of the JWST, operating at temperatures near absolute zero, is where the science happens.

All in all, there are more than 1,000 people in 17 different countries working on JWST, including academic and industrial partners ATK, Ball Aerospace, ITT, Lockheed Martin, Northrop Grumman (the prime contractor) and the Space Telescope Science Institute.

Designing, testing, building and assembling JWST was a team effort, taking place across three continents. The instruments are tested using a variety of computer-aided engineering (CAE) solvers for modal, thermal, thermal distortion, and structural analysis. Gluing all this analysis and simulation work together is Simcenter Femap from Siemens Digital Industries Software, the JWST team’s standard application for pre- and postprocessing.

“We use Simcenter Femap as the pre- and postprocessor,” says Emmanuel Cofie, who leads thermal distortion analysis on the ISIM (integrated structural instrument model). “The mechanical design team provides us with CAD files and we use [Simcenter] Femap to generate meshes for our mathematical model and, after finite element analysis, to extract results and view the condition and state of the structure under the various load conditions. It is the primary tool we used for visualization of the structure in its operational/launch states before actual testing.”

Because there is only one opportunity for the JWST to succeed, every part and assembly of every system had to be thoroughly tested on Earth to ensure that its instruments will function flawlessly under expected conditions. Simulating the JWST’s performance on Earth is the only way to determine that the observatory will function once in place. It’s a one-of-a-kind, custom job.

Using CAE solvers in conjunction with Simcenter Femap, NASA engineers conducted simulations to ensure each part does not interfere with another and that parts and assemblies have sufficient strength and can withstand extreme heat or cold and vibrations experienced during launch and normal operating conditions.

“Simcenter Femap™ is a very usable tool that is at once very affordable and also provides high value,” says Mark McGinnis, thermal distortion working group leader at Goddard. “It enables us to carry out our mission of analyzing the structural and thermal performance of parts and systems. Femap is easy to learn and use, and works well with any solver.” He estimates that the software is used frequently by at least 75 NASA engineers at Goddard.

“For example, we imported a back plane sub-assembly model from a contractor and populate it with 18 mirrors to visualize how they come together,” says McGinnis, “We need[ed] to be sure the interface grids are coincident as they were supposed to be, and then use[d] it to build the more than 8 million required grids, which makes a very large model from a computing standpoint. We assemble[d] the model using [Simcenter] Femap.”

Most of the engineers working on the JWST have used Simcenter Femap as far back as the mid-1990s. Cofie recalls using it during the development of Hubble. “We used it for a lot in those days and we continue to use it,” he says. “Simcenter Femap helps us understand loading conditions so we can take a structure, run the analysis and see what gets hot and what gets cold. It helps us visualize whether or not a model is feasible.”

McGinnis agrees that the visibility Simcenter Femap provides in postprocessing is a key advantage to their mission. “An engineer can easily understand the mathematical results of an analysis conducted with a solver,” he says. “But visualizing analysis results using Femap is an important benefit, showing you exactly what is going on.”

Webb’s goal is to image the earliest objects to form after the Big Bang. These are theorized to be colossal stars, grouping together in the first galaxies.

Webb will also probe the atmospheres of planets outside our Solar System (exoplanets) to determine if they hold gases that might hint at the presence of biology.

“Webb will have an opportunity to study these exoplanets and answer the fundamental questions that we astronomers ask ourselves, and the public alike – are we alone? Is Earth unique? Do we have other planets out there that can host life? These are very ambitious questions that speak to all of us,” said Antonella Nota, ESA’s Webb project scientist.

Live launch coverage in English will begin at 6 a.m. on NASA TV, the NASA app, and the agency’s website. You can also watch live on Facebook, Twitter, YouTube, Twitch, and Daily Motion. NASA will hold a prelaunch media briefing at 2 p.m. on Tuesday, Dec. 21, and a postlaunch news conference shortly after the live broadcast ends on Friday, Dec. 24.

Space.com: James Webb Space Telescope vs. Hubble: How will their images compare?

The Verge: How astronomers decided where to point the most powerful space telescope NASA ever built

4 Myths about AI in CFD April 6, 2021 As Artificial Intelligence (AI) has become more ubiquitous in our everyday lives, so too has confusion about what it is…
Surfboard CFD - Riding the Digital Wave July 29, 2022 The flip-flop engineering symposium Monday, December 9, 2019, 7 pm. Sunset Beach Elementary School Cafeteria, Oahu's North Shore, Hawaii. Two…
Model-based design from ICEs to ICUs: Bridging the… November 10, 2021 The events of the past few years have turned global attention towards health and, more specifically, healthcare. From the images…
This article first appeared on the Siemens Digital Industries Software blog at https://blogs.sw.siemens.com/simcenter/nasas-10-billion-james-webb-space-telescope-fully-fueled-for-launch/