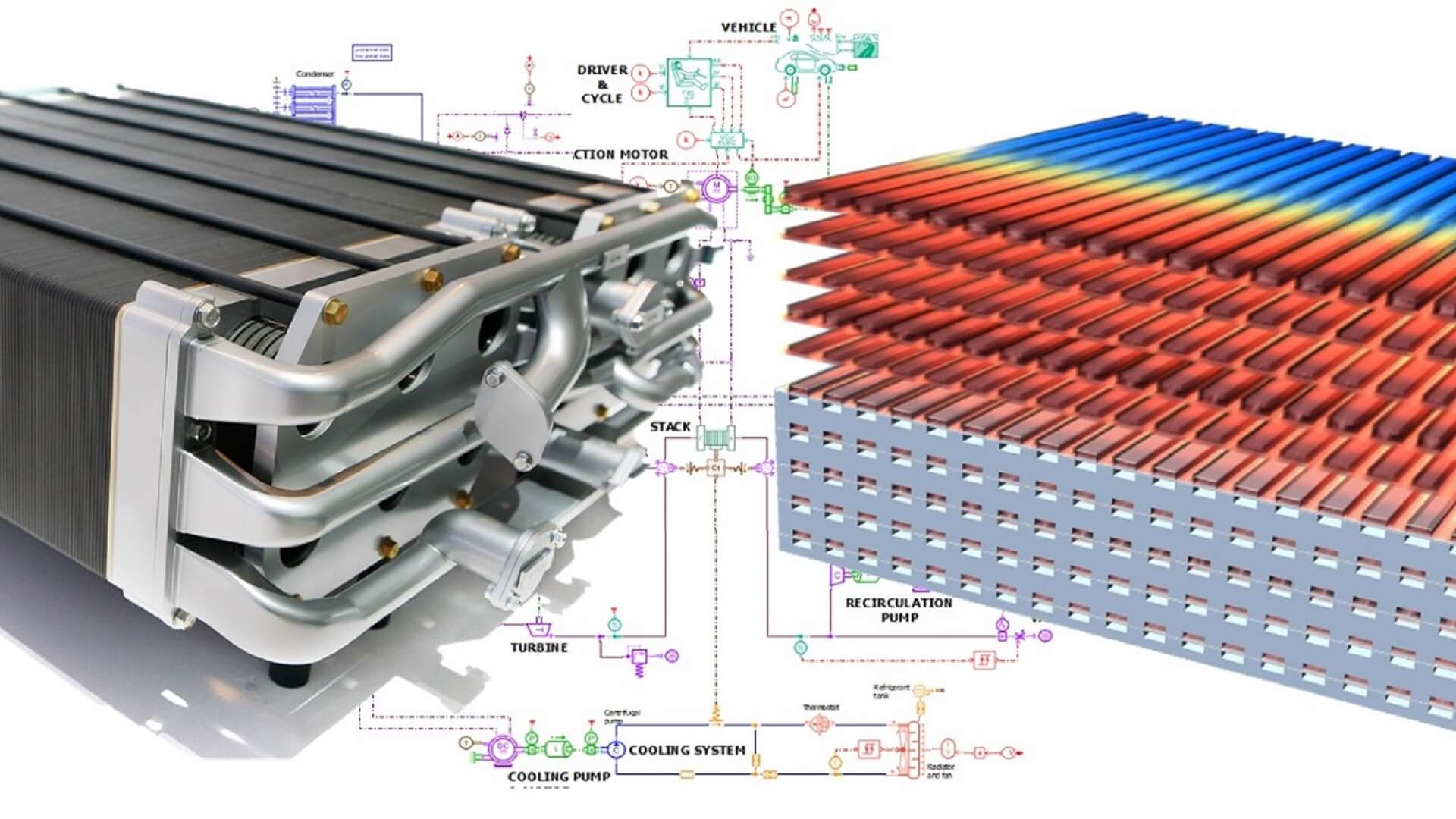 Discover the interest of multi-domain system simulation model of a Fuel Cell Electric Vehicle to predict interactions between the vehicle powertrain, the fuel cell and its auxiliaries as well as the controls.

In the trend of zero-emission vehicles, OEMs are considering fuel cells as a valid complement to batteries, especially for vehicles requiring a long-range without repeatedly recharging.

However, integrating the stack and the Balance of Plant (BoP) into a vehicle is not straightforward. It involves many interacting physics and subsystems that need to be perfectly combined with optimal control strategies. So as to reach the required levels of performance, the lowest energy consumption while ensuring strong reliability and longevity.

That’s why a multi-physics system simulation-based approach helps to predict and better understand the behavior of the fuel cell integrated with its air and hydrogen supply systems, as well as the water and thermal management systems.

A new ready-to-use templates model has been developed in Simcenter Amesim 2022.1. It integrates the classical components and subsystems of recent Fuel Cell Electric Vehicles such as the Toyota Mirai or the Hyundai Nexo.

The model includes the following subsystems:

On the left side of the sketch, components without any port are used to define:

On the right side of the sketch stands the Fuel Cell Electric Vehicle model. It is composed of 6 different subsystems:

Note that regenerative braking, through the traction motor, is considered in the model. The stack/battery control strategy can be modified in the fuel cell controller. One can also develop its own control model using the StateChart functionality or coupling with a control model developed in another simulation environment.

The complete model allows you to evaluate the energetic performance of a Fuel Cell Electric Vehicle with system simulation.

The 2nd graph shows the vehicle range and the battery state-of-charge (SOC). The battery SOC is not exactly the same as the one at the initial stage. The vehicle range may therefore be slightly different if taking into account the energy variation of the battery during the cycle.

The top left corner graph shows the traction motor torque in comparison with the torque request from the motor controller.

The top right corner graph shows the motor mechanical power used to move the car along the driving cycle and the corresponding motor losses.

The bottom right corner graph shows the voltage and the current in the traction motor.

The top left corner graph shows the stack voltage operating points in the function of the current density. This is an overview of the fuel cell stack polarization curve at low/middle current densities and under different operating conditions.

The top right corner graph shows the stack power and the thermal losses due to the reaction. The maximum stack power delivered during the driving cycle is also plotted.

Focus on the cathode side

Focus on the anode side

The top left corner graph shows the H2 consumption per km along the driving cycle.

The bottom left corner graph shows the percentage of H2 lost by the purges considering the drive cycle.

The top left corner graph shows the power consumed by the auxiliaries all along the driving cycle.

The top right corner graph shows the power distribution in the whole system all along the driving cycle.

The bottom left corner graph shows the distribution of the energy consumed by the auxiliaries. The compressor appears to be the main consumer.

The bottom right corner graph shows the energy distribution in the whole system. 58% of the energy is converted by the stack into electric power. The other part is converted into heat or used by auxiliaries.

We have illustrated here how to evaluate the energetic performance of a Fuel Cell Electric Vehicle with system simulation and simulate the physical behavior of a fuel cell system integrated in a FCEV. The virtual evaluation of design choices makes possible to evaluate the performances of the system and its relative controls. It also helps to point out weaknesses and needed improvements. The interest of such a model is the capability to predict interactions between the vehicle powertrain, the fuel cell and its auxiliaries as well as the controls.

4 Myths about AI in CFD April 6, 2021 As Artificial Intelligence (AI) has become more ubiquitous in our everyday lives, so too has confusion about what it is…
If you can’t take the heat… Simulate it! Reducing VTM costs… June 10, 2021 Find out how to efficiently and accurately simulate VTM using Simcenter Engineering's multi-fidelity workflows.
Lifecycle Insights - Guided simulation workflows: A… March 28, 2022 Engineers are increasingly adopting simulation early in the design process. And it’s easy to see why this shift-left strategy is…

This article first appeared on the Siemens Digital Industries Software blog at https://blogs.sw.siemens.com/simcenter/evaluate-the-energetic-performance-of-a-fuel-cell-electric-vehicle-with-system-simulation/