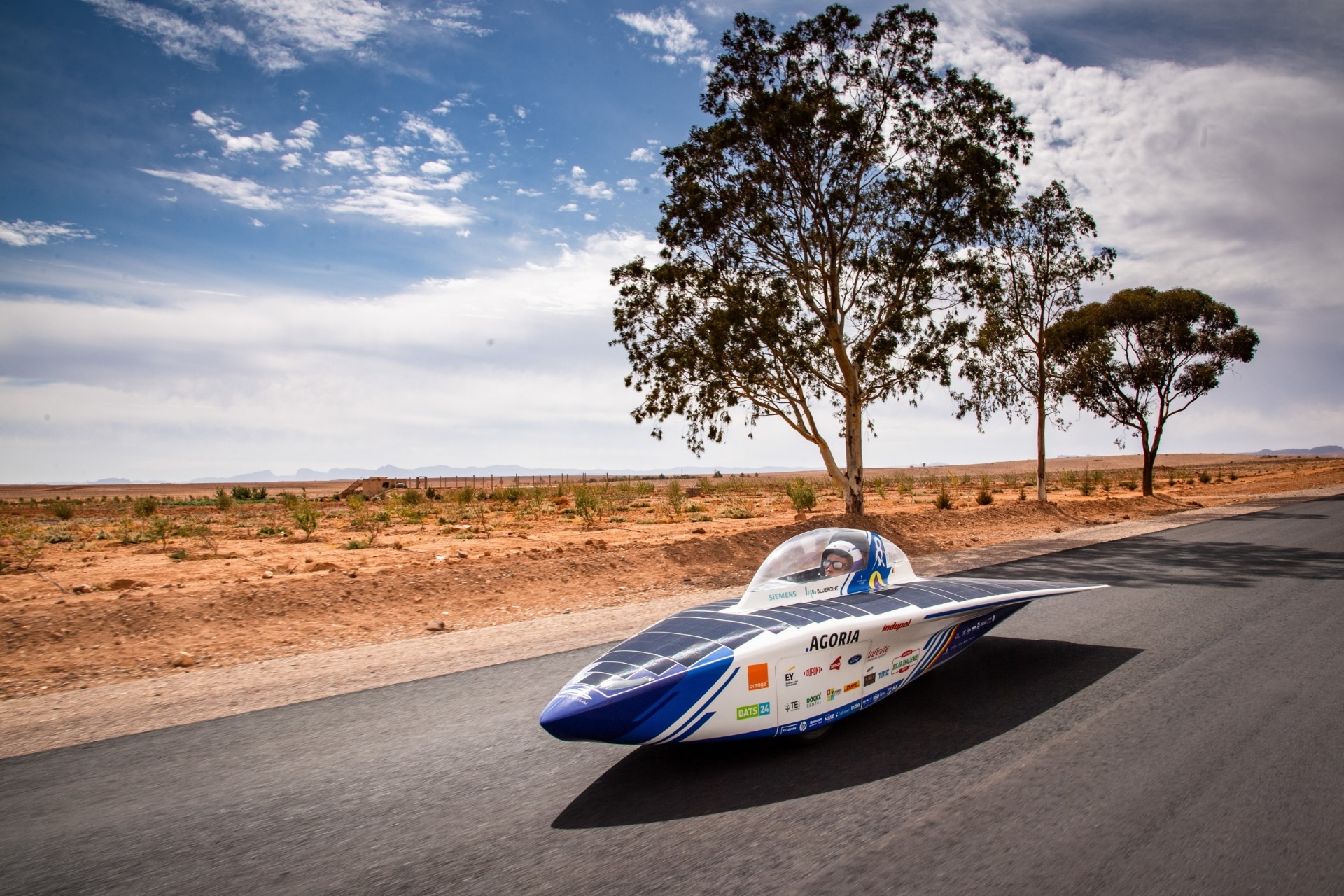 This week, we are celebrating the success of the Agoria Solar Team from the University of Leuven. They overcame mountainous terrain, chaotic traffic, desert dromedaries, flat tires, sandstorms, and floods to win the last stage of the Solar Challenge in Morocco and finish second overall in the competition.

University students from across the globe took up the challenge of designing and building vehicles powered on only solar power. They then had to take them on a grueling 5-day challenge over 2,500km through the Sahara Desert and the Atlas Mountains.

Agoria Solar won the gold medal in the World Solar Challenge in Australia in 2019 so came with high hopes. They made significant changes to their vehicle to allow it to cope with the different terrain in Morocco.

Just as they had done before, the students used Simcenter solutions to reimagine their design. The car, BluePoint Atlas – a three-wheeler with a pointed nose, had to be even more aerodynamic than before.

1800m Climb and hairpin bends on the way down were no problem. However … camels in the road were problematic!

The team got off to a great start on Day 1. They overtook 2 Dutch teams before heading into the mountains. The cars were then really put to the test with a climb of over 1800 meters. However, the strong engine of BluePoint Atlas kept the Belgian team in front. Its aerodynamic design navigated the hairpin bends on the descent with ease. Despite camels causing a roadblock and holding them up briefly, the team still fought to 1st place with a 17-minute lead.

Day 2 was not only the longest stage of the race but also featured the steepest and highest incline. It was a real challenge for all the vehicles. BluePoint Atlas led the way through the climbs and was in front until the last 50km when Solar Team Twente edged past in their car, Red Horizon. The Dutch team won this stage, but Agoria Solar maintained an 11-minute lead in the overall race.

Disaster in the Sahara Desert

The Sahara desert came next and it wasn’t just the terrain the teams had to worry about. Moroccan villages are known for chaotic traffic. Here, the roads are shared by cars, scooters, cyclists, pedestrians, and even carts pulled by donkeys! The Leuven students used bells and whistles to clear the track ahead. On the way, drawing plenty of attention on Day 3 with many passers-by stopping to watch and take photos. Solar Team Twente were out in front. Then disaster struck Agoria Solar in the form of a flat tire in the afternoon. The team was quickly back on track. Unfortunately, this cost them valuable time and allowed Solar Team Twente to take the overall lead by 36 minutes.

A huge sandstorm on the evening of Day 3 disrupted the competitors’ sleep and preparations for the next day. Despite this, the teams showed their professionalism and dedication to be ready for the start of stage 4 back to Zagora. Tight corners and flooding made for tricky conditions for all. Solar Team Twente and Agoria Solar Team led the way once again. The Dutch competitors managed to extend their lead by another 13 minutes, leaving the Belgian students facing a tough task to catch up on the final day. However, the team knew that they were still in with a chance. The challenging conditions forced the German and Swedish teams to drop out.

Fighting through to the finishing straight in Agadir

Stage 5 saw Solar Team Vattenfall take a surprise lead early on. Until they hit a technical issue that allowed Agoria and Twente to overtake them. BluePoint Atlas was not to be passed as it showed its strength in the mountains again and the Belgian students led their Dutch rivals all the way to the finish line in Agadir. Unfortunately, Team Twente managed to stay close behind, losing only 9 minutes on the day. This meant that Agoria had to settle for 2nd place and the silver medal this time around.

Despite not winning it was a fantastic achievement by the Agoria Solar Team. They built this solar-powered car and overcame all the obstacles they faced to get to the finish line.

Indeed, all the teams should be proud to have completed the challenge. It’s exciting to see the designs these students have come up with in their quest for efficient and effective sustainable transport.

We’re hoping to catch up with the Agoria Solar Team soon to get the inside track on how this project developed over the last 2 years so keep your eyes peeled for the next blog that will reveal the secrets of their success!

4 Myths about AI in CFD April 6, 2021 As Artificial Intelligence (AI) has become more ubiquitous in our everyday lives, so too has confusion about what it is…
Surfboard CFD - Riding the Digital Wave July 29, 2022 The flip-flop engineering symposium Monday, December 9, 2019, 7 pm. Sunset Beach Elementary School Cafeteria, Oahu's North Shore, Hawaii. Two…
Model-based design from ICEs to ICUs: Bridging the… November 10, 2021 The events of the past few years have turned global attention towards health and, more specifically, healthcare. From the images…
This article first appeared on the Siemens Digital Industries Software blog at https://blogs.sw.siemens.com/simcenter/agoria-solar-team-racing-through-the-atlas-mountains-on-solar-power/