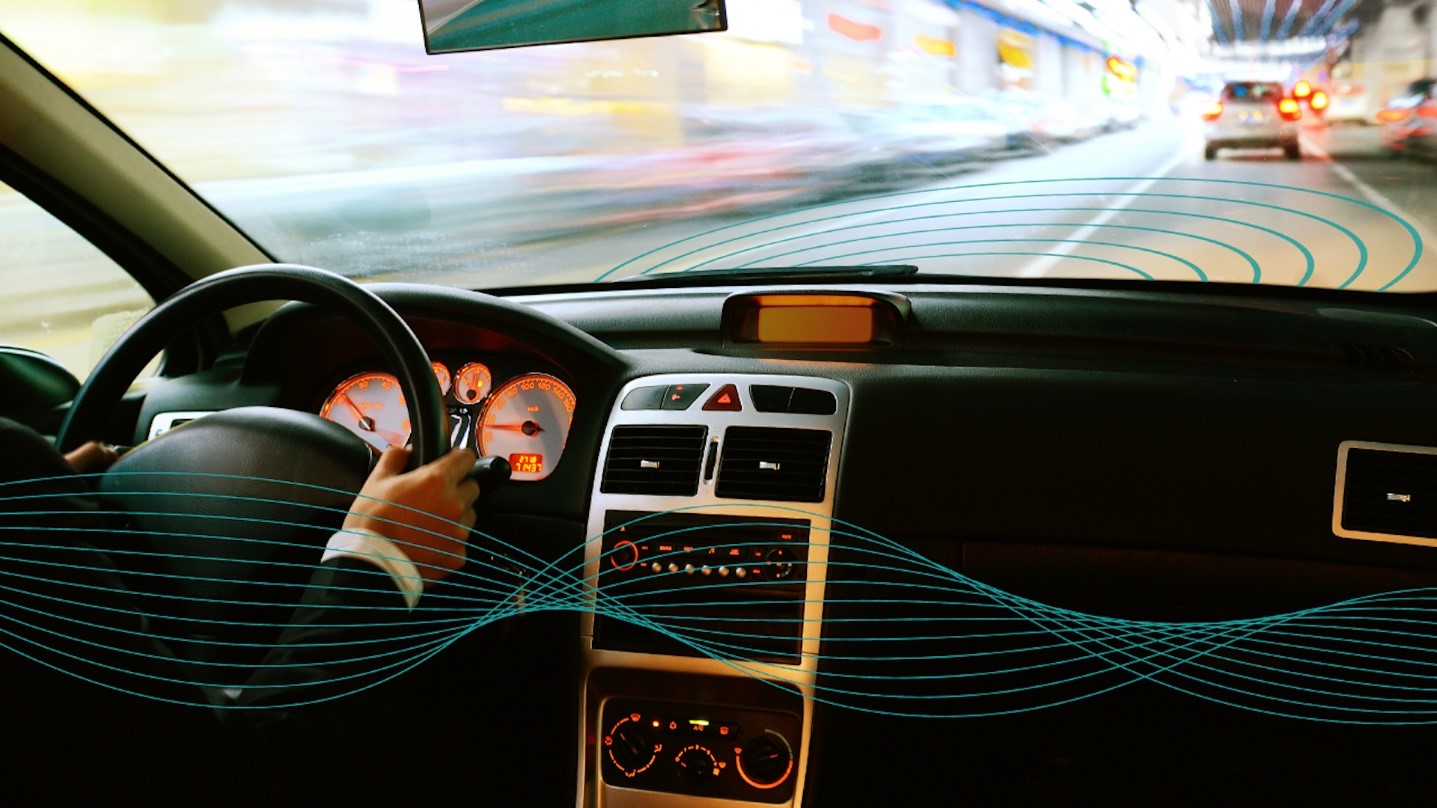 Starting with the end in mind is one of the 7 habits of highly effective people, as described by Stephen Covey in his best-seller book, and it’s the one that resonates most when engineering complex products. Take active sound for example: it needs to be designed, validated in the car, and finally deployed to the target vehicle. Deploying active sound design for mass production means that the active sound needs to run on a specific tier-1 audio hardware (HW) system. Sound designers are giving crucial input in shaping sounds that match the brand perception both on the outside as well as on the inside. But they should be keeping the end in mind, which is that such sound should be deployed in mass production vehicles. In practice, that means that a strategy should be available to deploy this in embedded audio hardware of tier-1 suppliers.

Active Sound Design is a method

Active sound design (ASD) is a methodology that, in addition to functional sound, generates meaningful sounds to be replayed in the vehicle (internal or external) in order to improve interior sound quality (internal) and to ensure pedestrians’ safety (external).

Why would engineers want to add sound to vehicles? First, because they must. Electric and hybrid vehicles make little to no noise at low speeds. This causes potentially dangerous situations for so-called weak traffic participants such as pedestrians and bikers. Specifically the visually impaired and children. In a scenario of a pedestrian crossing a street, auditory feedback is used as an early warning of danger.

So we ‘must’ add sound on the outside of the vehicle! But there is also the opportunity to do this on the inside, ‘because we can’. Electric motors produce remarkable torque levels that are instantly available as soon as drivers touch the throttle. But the great push in the back is not complemented with a sound that matches the dynamic of the vehicle.

When dealing with vehicle sounds, one needs to make sure that not only each component is emitting the “correct” sound. Designers must also make sure that they sound good when interacting with each other.

Analysis of Electric Vehicle (EV) noise reveals new noise sources. These are traditionally masked by the Internal Combustion Engine (ICE) noise, and are now audible in electric vehicles. At higher speeds, road noise and wind noise become much more important and are in fact the biggest noise contributors. Other systems and components like the HVAC system or battery cooling systems are also audible inside the vehicle.

All these noise sources are considered by designers when they design active sounds for a vehicle. The combination of these sounds with the artificially added sound is a big concern during the design. Therefore, validation in the target vehicle is of extreme importance and allows final tuning of the sound. This can also be partially front-loaded on vehicle simulators.

Deploying Active Sound Design for mass production is not like: ‘Let’s hire a sound designer to compose a sound and then we put it in the vehicle’. Instead, it is a methodology that follows 3 very distinct steps, outlined in the figure below. They differ slightly depending on whether the goal is to design an exterior AVAS sound or an interior sound. But largely the steps are the same in both processes. Design in the studio, Validate & Tune inside the vehicle, and Deploy for mass production.

In the Design phase, sound designers start with a tabula rasa. They aim to define the brand identity of the Auto OEM, the portfolio of vehicles, and the individual models.

Even though sound design is a creative exercise, there is a step-by-step process to go through the design of active sounds. This brand sound exploration is a process that defines which are the attributes that should fit a vehicle. This can be laid down in a rule-based approach. It is the result of several iterations and interviews with key stakeholders. These include designers, engineers, and also potential future buyers and drivers. They use techniques such as jury testing. These rules can at first instance be very subjective, and sound designers will aim at representing them with sound samples. This together defines the brand sound that we want to find back in the active sound design.

Sound signatures can already be assessed in an early phase using recorded driving profiles from real vehicles. For more on that, read this post!

In the Validation phase, the sound designer will want to take the sounds designed in the studio to the target vehicle. Because whatever you design in the studio must be validated in the vehicle.

The sound models will need to be tested on a vehicle sound simulator, or, even better, the actual vehicle prototype. This is crucial to ensure that the sound model from the studio will not sound differently in the vehicle. The actual driver interaction with the generated sound can only be tested in its real environment. At that moment, real-time interaction with the vehicle is required to access the parameters that influence the active sound.

‘Taking’ the sound signature, and ‘connecting’ it to the CAN bus requires dedicated hardware. The Tier-1 audio hardware for mass production is most probably not available yet (if even selected). Also, the prototype target vehicle is often not available yet in which case a mule vehicle is used. That’s a representative existing vehicle with often a low baseline interior noise. A development audio unit is used that contains the same components as we find on a real Tier-1 audio system.

As argued in the beginning, start with the end in mind! For Active Sound Design that means that designers should start to design active sound with the ultimate goal of deploying it to mass production of the target vehicle.  More specifically, it needs to run on the tier-1 audio hardware selected by the Auto OEM. Such hardware does not only manage ASD, but it also integrates all other audio processes running in the vehicle, such as infotainment, bluetooth for cell phones, navigation, warning sounds, and active noise cancelation.

To understand the deployment of ASD it is required to understand how such HW works. First, it typically has several Audio DSP chips, from chip suppliers such as ADI, NXP or TI. These chips have typically a small internal RAM memory. They are integrated on an HW audio board that also has flash memory that can store some audio samples and can be loaded into the Audio DSP RAM when used. Finally, there are also USB/UTP interfaces to communicate with the device, audio buses, and audio input/output.

On this hardware runs an application called a framework. The framework is made by a programming tool for embedded HW devices, such as Code Composer Studio or AUTOSAR. The code needs to be compiled with a certain compiler for that programming tool and then flashed on the HW.

There are two major challenges when it comes to deploying active sound design signatures for mass production on such HW systems. First, the sound signature needs to run on the framework. It would be a waste of resources if the perfectly designed sound needs to be reprogrammed again from scratch in the framework. Also, it’s neither the job nor the skill of the sound designer to program embedded HW code.

The second challenge with deploying ASD is that a sound signature needs to be validated and tuned with the vehicle. It would definitely be not an efficient process if every change to the sound results in first programming that change. Then recompiling the code, flashing it on a chip, and putting the HW board back in the vehicle. And only then the designer is able to test it…

The solution to both challenges is that the sound synthesis library is integrated with the framework. This is employed by Simcenter Testlab Sound Designer. Integration means that the library is compiled with the framework. It then runs on the audio DSP, can access the flash memory, and an interface exists to communicate with it. This will allow the sound design tool to communicate with that library via USB or UTP. It allows dumping an entirely new signature to the audio HW without having to recompile the code. Furthermore, an update of a couple of parameters can be done in real-time, and the effect will be audible instantly.

Active Sound Design is a process that should include the Deployment phase. It would be a poor Deployment strategy if the output of the Design & Validation phase would be a single sound sample that has to be passed on to a tier-1 audio supplier, who has to put a team of sound designers in action to recreate that sound again.

Therefore, the power of a sound design solution is to be able to deploy what it creates to embedded audio HW systems.

Want to learn more about Active Sound Design and deploying it for mass production?

Check this page, where you can read how Hyundai Motor Corporation creates active sounds for their vehicles, and where you can attend an on-demand webinar.

This article first appeared on the Siemens Digital Industries Software blog at https://blogs.sw.siemens.com/simcenter/active-sound-design-deploy-mass-production/