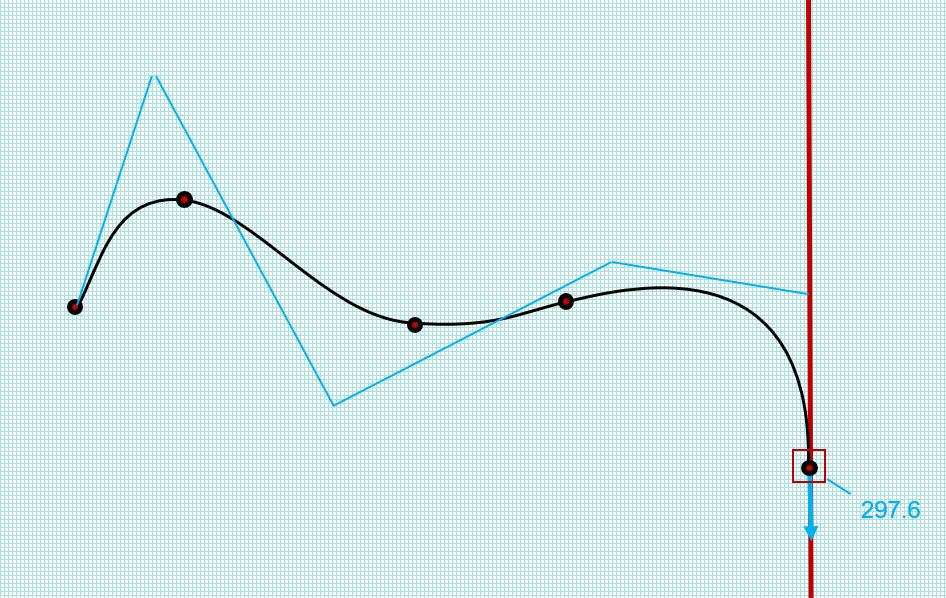 This article discusses techniques for creating and controlling flexible spline curves in the D-Cubed Dimensional Constraint Managers (2D DCM and 3D DCM). The examples given will focus on spline curves in the 2D DCM, but many of the principles can also be applied to splines in the 3D DCM. The article is aimed at anyone with an interest in developing curve sketching functionality in a CAD application environment. The article should be accessible to anyone with some previous background knowledge in the following areas:

This article aims to answer some of the questions which may be encountered when a user-defined spline shape is incorporated into a geometric sketch. The main objective will be to create a curve which can maintain a characteristic shape whilst allowing additional constraints to be introduced between the curve and other sketch geometry. It is assumed that a constraint manager (the 2D DCM) is being used by the application to maintain geometric relationships in the sketch.

Interpolating splines lend themselves well to this task, by virtue of their properties:

Some situations which may be encountered when using interpolating splines include:

The approach taken in this article aims to address these aspects of spline solving behaviour, allowing close control of curve shape and robustness to changes in other geometry, without large changes in shape or over-defined situations.

Figure 1: An interpolating spline and a control point spline

The DCM provides a dedicated spline curve type, allowing an application to specify an exact curve shape using a parametric NURBS-based definition. Constraints may then be added between the spline curve and other geometries. DCM provides two modes for adding spline curves, corresponding to the two classifications outlined above. In the current article, it will be convenient to work with interpolating splines, which delegate some of the spline implementation details to DCM and avoid the need to handle such details at the application level.

Given a set of user-defined positions, we will aim to create a smooth spline curve which passes through the positions. It will be desired to connect the curve to other geometry in the sketch, using constraint types such as coincident and tangent. We will make use of the DCM’s interpolating spline functionality, specifying the user-defined positions as interpolation conditions for the spline. When adding an interpolating spline to the DCM, the application has the choice of creating a rigid, scalable or flexible spline curve.

As the name suggests, rigid splines maintain their initial shape, so the constraint manager may only transform the whole curve using rigid transformations (translations and rotations). This limits the edits that can be made to the sketch and no solution may be possible for particular dimension values or when adding new constraints.

Flexible interpolating splines are a DCM curve type which pass through a given set of positions but are not fixed in shape. This allows the DCM greater flexibility to satisfy user-defined constraints by modifying the shape of the curve. However, some application integrations may choose rigid curves to avoid sketch modifications forcing unwanted changes in curve shape.

Scalable splines allow the shape to be maintained, subject to one or two scaling freedoms (either isotropic or in two orthogonal directions). Discussion of these is beyond the scope of this article.

Table 1 summarises some advantages and disadvantages of the possible approaches:


Table 1: A comparison of approaches for creating a spline curve based on user-defined points

A key differentiator between all these approaches is the availability of freedoms in the underlying spline definition. In the case of the rigid spline, each control point is relatively rigid to the other control points. This leaves the spline with no internal freedoms to reshape once the end point positions are fixed by constraints.

In the case of a flexible spline, the control points have positional freedoms relative to one another, but this does not necessarily prevent the spline from becoming over-defined. Each control point contributes 2 degrees of freedom to the internal freedoms of the spline, which are balanced by the freedoms removed by the interpolation positions. Fixing the interpolation positions will uniquely define the control point positions, leaving no freedoms to satisfy additional constraints (for example, a tangent constraint to another curve).

To define a spline passing through a set of interpolation positions which will support additional constraints, it is necessary to introduce additional freedoms into the spline’s underlying definition. Fundamentally, this involves the introduction of a new knot value into the spline’s knot vector, with a corresponding increase in the number of control points in the spline definition. The DCM spline interface allows an application to specify the knot vector for a DCM spline curve, but this requires an application to implement its own spline functionality, which the DCM spline implementation aims to make unnecessary. An alternative, more user-friendly approach, is to make use of spline interpolation conditions which will be explored in the remainder of this article.

Crucially, the position of each point has been fixed in the DCM, removing the 2 positional freedoms from each point. By fixing the interpolation positions, all freedoms from the spline control points have been removed. The spline has no remaining freedoms and is well-defined – adding any additional constraints will over-define the spline*.

Suppose that the application needs to add a tangent constraint between the spline curve and the vertical fixed line. To avoid over-defining the spline curve, it will need to increase the internal freedoms of the spline, by adding a new interpolation condition. Since a tangency constrains the curve direction at the point of contact, a natural choice for the interpolation condition is the DCM’s first derivative condition type (DERIV1). Figure 3 below shows the spline curve after adding a new interpolation condition to the existing spline. In this model, a pair of first derivative direction (DERIV1_DIR) and first derivative magnitude (DERIV1_LEN) conditions have been added, which allows the direction and magnitude of the tangent vector to be controlled independently. The control polygon indicates that the number of control points has increased to 6, corresponding to the introduction by the DCM of a new knot value in the spline’s knot vector.

Figure 3: Increasing the number of control points in the spline’s definition by adding interpolation conditions

The new pair of interpolation conditions have been added based on the current tangent vector at the spline end. The spline now has sufficient internal freedoms to solve the given values of these conditions and remains well-defined. However, at this point, adding the tangent constraint between the spline and the vertical line will still over-define the spline, since the new derivative conditions have not been made available as freedoms to the DCM.

DCM provides a ‘duration’ setting on all interpolation conditions – this setting can be used to release spline freedoms, allowing additional constraints to be applied to the spline. In the above spline configuration (Figure 3), the new interpolation conditions were assigned a duration of IDURATION_ALWAYS. This duration setting instructs the DCM to ensure the spline curve definition always satisfies the given condition, which has the effect of removing a freedom from the spline. Applying the tangent constraint will over-define the spline, since there are not enough freedoms in the spline definition**.

If the alternative duration setting of IDURATION_CREATION_ONLY is used, the DCM initially reports the model as under-defined, with 2 freedoms remaining. The conditions on the spline’s end tangent vector are used by the DCM to generate the initial spline shape, but the freedoms in the spline control points are still available during an evaluation. This allows additional constraints to be applied to the spline without over-defining it.

Figure 4 shows the same spline evaluated after adding a tangent constraint to the vertical fixed line, using the IDURATION_CREATION_ONLY duration for the DERIV1 conditions. The 2nd control point from the right is now positioned vertically above the right-hand side end of the spline, satisfying the tangent constraint. The direction of the DERIV1_DIR condition has also changed from its original direction shown in Figure 3 during the evaluation.

Figure 4: Modifying duration settings on interpolation conditions to allow a tangent constraint to be added onto the spline

At this stage, the spline remains under-defined and has one freedom remaining, since the tangent constraint removes only one of the two freedoms introduced when the interpolation conditions were added. Changing the duration of the DERIV1_LEN condition back to IDURATION_ALWAYS fixes the tangent magnitude and fully defines the spline.

This approach allows a spline definition to continue to pass through the specified interpolation conditions, but also provide enough freedoms to satisfy constraints to other geometries.

The example application code below demonstrates the creation of the spline in DCM, specifying interpolation points and derivative end conditions together with the tangent constraint to a fixed line.

In part two of this article, we’ll look at how DCM variables can be used to link the shape of a spline curve to control geometry, providing the end-user with further control of spline shape. We will also discuss choice of curve parameterisation and how it affects the shaping of flexible spline curves.

*Excluding over-constrained but consistent constraint (OCC) schemes.
**Both DERIV1_DIR and DERIV1_LEN conditions each remove one internal freedom from the spline.

This article first appeared on the Siemens Digital Industries Software blog at https://blogs.sw.siemens.com/plm-components/flexible-spline-curve-control-in-the-d-cubed-dimensional-constraint-manager-dcm-part-1/