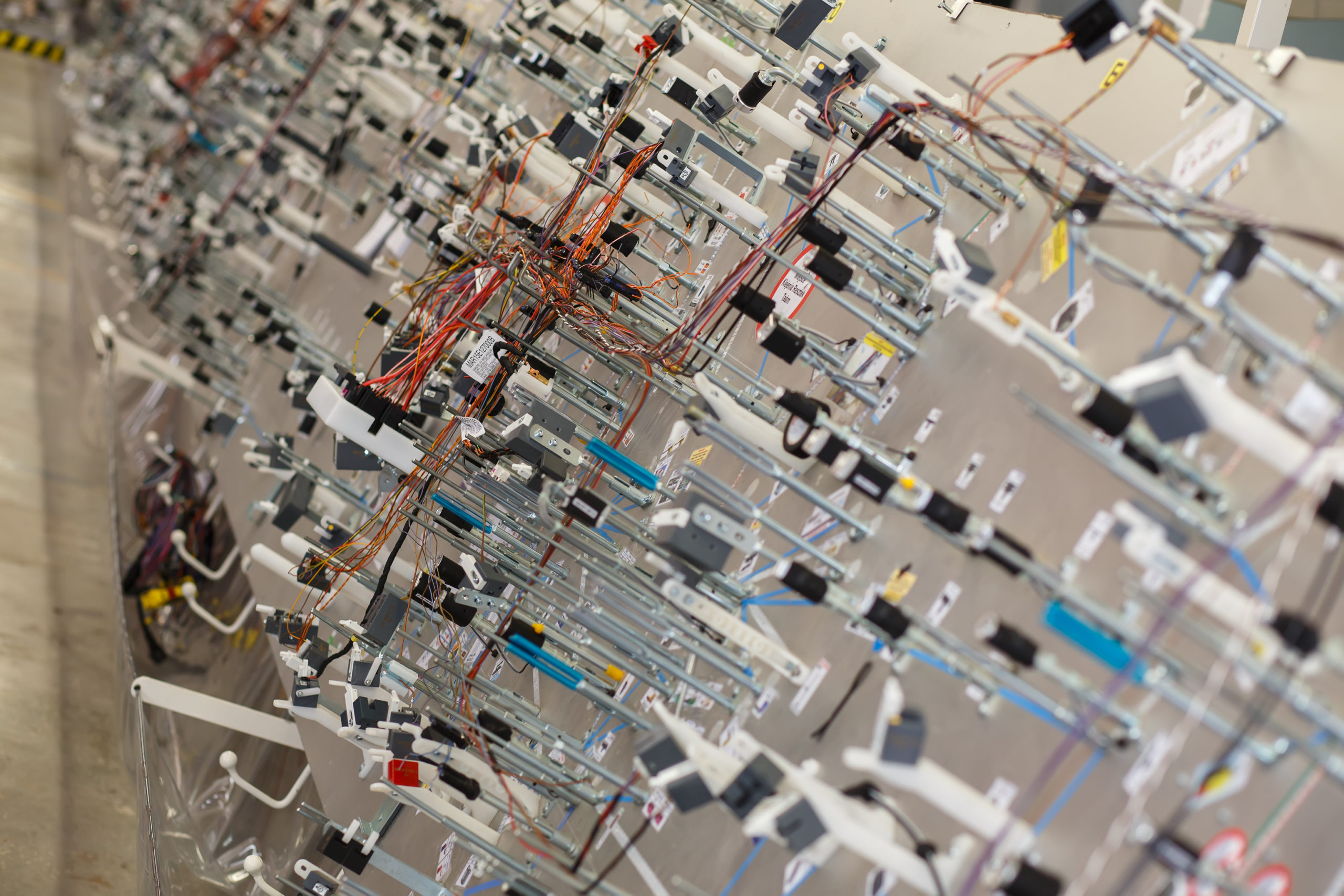 The wire harness industry is very competitive. Increasing complexity is straining profitability of the manufacturing process, which is still highly manual and labor-intensive. This situation is expected to continue given megatrends such as electric vehicles and autonomous driving and their associated impacts on electrical distribution systems. In addition, harness makers still have to manage and implement lots of design changes even while the product is already in production, further impacting production lines.

In the pursuit of improving profitability despite growing industry challenges, harness manufacturers can achieve significant gains by merging similar formboards and, thus their production lines.

What exactly is a merged formboard?

First, what exactly is a formboard? Formboard drawings are one-to-one full-scale representations of the harness design data, enriched with additional manufacturing information. Along with the wire harness objects, all manufacturing-relevant objects like bundle forks, connector holders, clip holders or tape position indicators are graphically represented on these formboard drawings. Formboards provide visual aids for the operators that guide them during harness assembly.

The manufacturer could set up a second production line for the gasoline front-end harness to cover the increased take rate. However, this will require more factory space, more equipment and more operators, further cutting into profitability.

A better approach might be to redesign the diesel production line to allow it to produce both the diesel and gasoline harnesses on the same line. This can be achieved through a merged formboard.

Despite the potential benefits illustrated by the example above, there is often resistance to even considering merged production lines because of a) the initial challenge of merging complex formboards, and b) the complexity of change management thereafter. The difficulties of merging formboards, however, are caused primarily by a reliance on manual drawing tools to create harness designs and formboard diagrams (figure 2). Today, however, modern electrical systems and wire harness engineering software can drastically reduce the challenge of merging even complex formboards, and streamline change management afterwards.

Capital: how merged formboards should be designed

A harness design in the Capital suite is stored as a dataset. The software can use this dataset to automatically generate a variety of diagrams, including formboards. Each diagram can be styled independently, allowing engineers to create the right graphical representation for each use case. Change management is easier and more reliable since data, once entered, can be reused almost indefinitely, and because data and the corresponding diagrams remain related to each other for the entire flow.

Capital also dramatically reduces the time required to create a merged board. Capital Formboard Manager can calculate the actual amount of common content between candidate formboards at the click of a button. Then, automated merge functionality can take over the repetitive tasks, allowing engineers to focus on more important tasks. The tool also makes it easy to retain the position of existing fixtures on the physical formboard during the merge. Indeed, since relationships to the candidates (source designs) are maintained throughout the merge formboard process, change management is generally very fast and easy to handle.

Capital Formboard Manager enables the creation and maintenance of merged formboards in an environment based on contiguous data flows. The tool makes it easy for manufacturing engineering department to maximize efficiency of their production lines. Transitioning from a purely manual approach relying exclusively on drawing tools to one centered on linked data vastly reduces the effort required to merge and combine boards and production lines. Capital allows manufacturing engineers to focus on what they do best, like quickly working through various line optimization scenarios, rather than operating ponderous drawing software. For harness manufacturers, this means making better shop-floor decisions and, ultimately, reaching the profitability zone that much faster as inevitable changes are made.

You might also be interested in this on-demand webinar: A new vision for manufacturing engineering: How to address key formboard merging challenges

Improving electrical system and wiring design November 23, 2020 Electrical systems are more complicated than ever. Today, the electrical and electronic complexity of even the “simplest” machines has ballooned,…
Delivering electric vehicle innovation with MBSE August 14, 2020 Manufacturers of electric vehicles (EVs) face unique challenges in designing and manufacturing compelling offerings in a market that is rapidly…
Vehicle maintenance will require advanced tools and training September 1, 2020 Automotive industry trends towards electrification and autonomy will have wide-ranging effects in the engineering, manufacturing, and servicing of vehicles. Internal…

This article first appeared on the Siemens Digital Industries Software blog at https://blogs.sw.siemens.com/ee-systems/2020/06/03/merged-formboards-to-improve-harness-manufacturing/