To understand how techniques fit together as part of a comprehensive verification methodology, we’re mapping techniques as a function of design abstraction they’re intended to address and verification abstraction through which they’re best applied. This is what we started in Verification Methodology Reset. At the end of that I promised to come back and describe the colour coding I used and the stuff in the bubbles so that’s what we’ll do here.

For review, this is the graphic we’re working from… 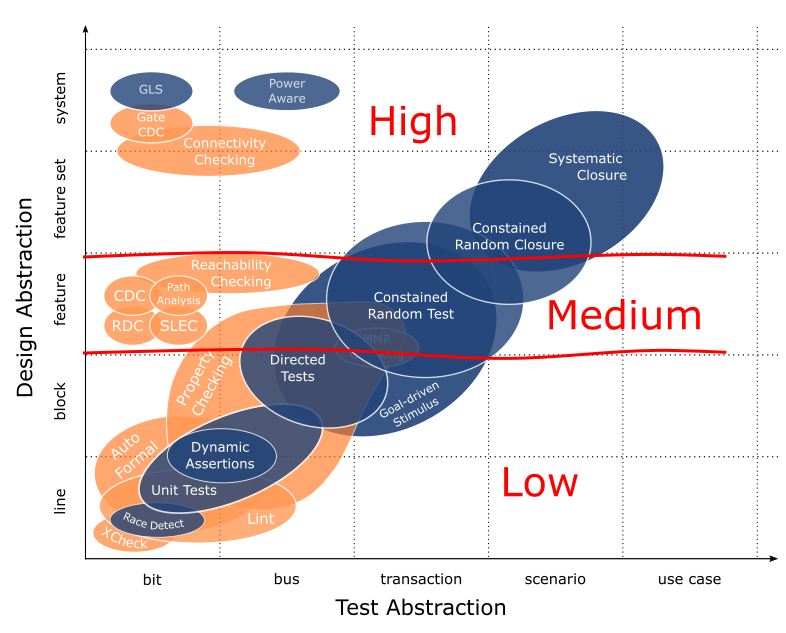 The colours represent the underlying engine that powers each technique. Blue is simulation, orange is formal.

I should say I waffled on the colour coding because this discussion needs to be engine agnostic. Part of how we develop tunnel vision in verification – and incomplete methodologies – is by tuning out discussions that don’t support our own experience. For example, aside from a week-long formal tool eval back in 2003, I’ve completely ignored all things formal. Simulation is the only thing I’ve ever known. My ignorance – let’s call it what it is – has held me back for a long time and I’m incomplete as a result.

I don’t want people to be held back anymore. We’ve long passed the point where formal is strictly for formal specialists. Likewise for constrained random and others. We no longer need to be experts to reap the benefits of a particular practice so be careful not to infer too much from the colour coding. It’s for crude – and increasingly obsolete – association only; nothing more.

To the bubbles themselves, we’ll split the discussion into three parts, first set apply to lowest level line/block design abstractions, second focuses on the middle feature abstraction and third is high-level feature set/system (I have the low, medium and high scribbled over the graphic for reference). Considering part of the point here is to pull people of all verification backgrounds together, we’ll cover everything but just briefly. I’ll give you a description of what’s in each bubble with an idea of relative complexity and its requirements in terms of expertise. I have techniques grouped where appropriate based on effort and scope. You’ll see I’ve also split techniques for focus (see: constrained random test and constrained random closure). Admittedly, the descriptions sound a bit mechanical, but I did that to maintain equal representation between them and avoid unintentionally asserting my own biases.

Finally, as you read on you should see a theme emerge, that a complete methodology requires a complementary deployment of multiple techniques. At each abstraction, we have options for comprehensive, high effort techniques focused on detailed design intent and low effort techniques to trap unintended implementation choices and outcomes. Some overlap where noted, but everything has a specific purpose. Saw to cut lumber, hammer to pound nails, cordless to drive screws, etc.

General, low effort techniques include lint and autoformal. They capture unintended design constructs and language usage. As such, they flag a variety of issues; lint through static code analysis and autoformal through formal property checking. Some overlap exists between the two techniques though they are complementary with autoformal being an extension of lint. Both are low effort techniques that are easily integrated. Neither requires experienced users.

Continuing from line/block but with a few differences with respect to purpose… comprehensive, high effort techniques include property checking and directed testing. Property checking and directed tests build forward from a sanity baseline, continuing through the known feature space with input considerations for full transactions and multiple transactions. At the feature level, both require moderate to expert level experience.

Reachability checking is a general, low effort technique for finding dead code within a design. It requires no experience or design knowledge to use.

Comprehensive, very high effort techniques at the feature level are goal-driven stimulus and constrained random testing. The increase in effort corresponds to the addition of infrastructure for self-checking and stimulus generation. Goal-driven stimulus comprehensively covers a specified feature space; likewise for constrained random with randomization that takes a design beyond the known feature space. The primary objectives of both are bug finding. Tests cover multiple transactions with variability across those transactions. Moderate to expert level experience is required.

Connectivity checking is a general, moderate effort technique applied primarily to SoC level or within large subsystems to formally verify connectivity within them. No specific expertise required. Does require a complete definition for point-to-point integration connections within the DUT.

Power aware verification is a targeted, moderate effort technique applicable to designs that require active power management. The focus is verifying power domain partitioning/protection and correct operation during transitions between power states including power-up and power-down. Power aware is deployed as an additional dimension to simulation or emulation platforms. It requires intermediate to expert level expertise for capturing power management architecture in UPF (or equivalent).

That was a lot but we’re still just getting started. Next post we transition all this stuff to a timeline. We’ll see when tools kick in, where they overlap and how they complement each other across a development cycle.

The September Verification Horizons is Now Online! September 2, 2021 I'm really excited to share with you a very special issue of the Verification Horizons newsletter for September, 2021. The…
Leave the House With a Clean Design September 14, 2021 Wouldn't it be great if there were something that would stop you from leaving the house wearing mismatched clothes -…
PCIe Gen6 verification - the PCI Express generation… May 20, 2021 Billions of us today – regardless of which Generation we belong to, Gen-X, Gen-Z, Millenials, Generation-Alpha – use PCI Express®…

0 thoughts on “Tools In A Methodology Toolbox”