This blog is a continuation of a series of blogs related to the 2016 Wilson Research Group Functional Verification Study (click here).  In my previous blog (click here), I focused on FPGA design trends. In this blog, I am updating my original 2014 blog with the findings from our new study related to the effort spent in verification.

Directly asking study participants how much effort they spend in verification will not work. The reason is that it’s hard to find a paper or article on verification that doesn’t start with the phrase: “Seventy percent of a project’s effort is spent in verification…” In other words, the industry is already biased to respond with this effort value. Yet, there are really no creditable references to quantify this value.

I don’t believe that there is a simple answer to the question, “How much effort was spent on verification in your last project?” In fact, I believe that it is necessary to look at multiple data points derived from multiple questions to truly get a sense of effort spent in verification. And that’s what we did in our functional verification study. 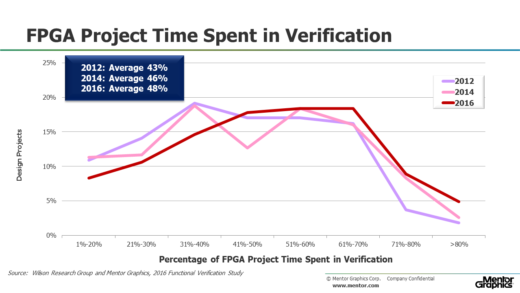 Between the years 2012 and 2016 we see a 2.79 percent compounded annual growth rate (CAGR) increase in the average time an FPGA project spends in verification. Historically, FPGA projects have spent less time in verification than ASIC/IC projects. The FPGA project strategy has traditionally been to get to the lab as soon as possible, and then iterate on issues in the lab. In a future blog I’ll show data that indicates this strategy does not necessarily yield good results in terms of meeting project schedule or quality objectives. Also, this lab-focused approach to FPGA verification becomes less effective as FPGA complexity increases. 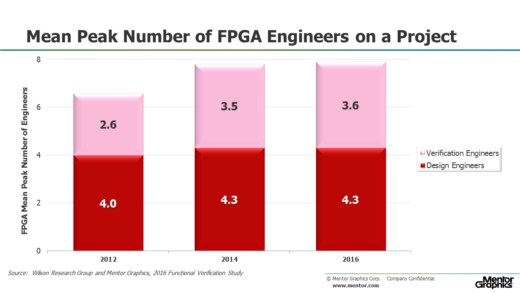 In my next blog (click here) I focus on the time that FPGA design and verification engineers spend in various task.