For some time now a dedicated group of engineers have defined and standardized an important update to the VHDL standard.  Also know as IEEE Std. 1076™-2008, this update to VHDL took an interesting path to get to where it is today.  The VHDL standards team started the standards development work in the IEEE but sought additional input and standards project funding from industry.  Accellera provided a good venue in which to get industry input and feedback for an update to the VHDL standard along with funding.  Once industry input was taken into account, the proposed update to VHDL, approved by Accellera, was returned to the IEEE for official standards ratification and ongoing maintenance.  Jim Lewis, the IEEE VHDL Working Group Chair, points out this is the greatest update to VHDL since VHDL 93.  And I agree.  Jim is also the subject matter expert for the VHDL-2008 course modules on Verification Academy mentioned in this blog. 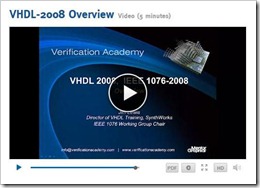 In less than an hour and half – over 7 course modules – Jim will layout out the additions and changes to VHDL-2008 to simplify the language and extend it to address more of your pressing design and verification challenges with the addition of reusable data structures, simplified RTL coding and the inclusion of fixed and floating point math packages.

As part of my role in international standardization as co-convenor of the IEC TC 93 WG2 (now known as IEC TC 91 WG 13) and in keeping with the IEEE/IEC dual-logo agreement, I helped complete the dual logo process for this version of VHDL in 2011.  VHDL-2008 is also now known as IEC 61691-1-1-2011 – Behavioural languages – Part 1-1: VHDL Language Reference Manual.  I think we can all agree that that name is a bit much that we can simply call it VHDL-2008.

With this round of standardization complete, the VHDL-2008 course modules arrive just as complete support for VHDL-2008 emerges here at Mentor Graphics in our ModelSim and Questa products.

I encourage and invite VHDL users to get acquainted with VHDL-2008 via the seven course modules on Verification Academy.  Verification Academy “Full Access” membership is required.  And it is easy to sign up (certain restrictions apply).  For a quick look at what the courses offer, the introduction page found here will show you more details about the following modules.

There is additional reference material you may wish to have to get the most out of VHDL-2008.  Here is my short list:

Leave the House With a Clean Design September 14, 2021 Wouldn't it be great if there were something that would stop you from leaving the house wearing mismatched clothes -…
Clearing the Fog of ISO 26262 Tool Qualification April 13, 2022 Introduction Developing products to the ISO 26262 standard requires many activities across multiple disciplines. One of those activities is ensuring…
Getting your Safety Architecture just right February 4, 2022 Introduction In a recent industry survey, roughly 40% of ASIC and FPGA project starts had functional safety part of their…

This article first appeared on the Siemens Digital Industries Software blog at https://blogs.sw.siemens.com/verificationhorizons/2013/01/24/vhdl-update-comes-to-verification-academy/