It was Fashion Week in Portland, Oregon in early October.  And while the thought of Portland and fashion might not be believable to many in the world, especially those who look to the design houses of Paris or Milan, it was.  What struck me was the blend of fashion with high tech this year.  Intel took the opportunity to roll out its fashion inspired campaign (dressing room mirror sized tablets) and Mitsubishi used it to launch its new electric vehicle (named MiEV in case you did not know).  Certainly it was more than just your run-of-the-mill runway show.  But that was not the only thing “getting some style” here in the Portland area. 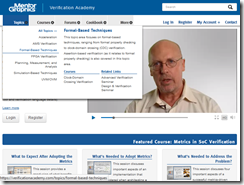 The Verification Academy team at Mentor Graphics has been working hard as well to restyle the Verification Academy website, modernize it and make content easily accessible. It made its debut in late September, a few weeks before the Portland Fashion Show.  While these two things are a coincidence, the focus on a refreshed style should not to be totally unexpected.

We have moved to the most current web video protocols that allow modern browsers and mobile devices to easily access course content. You can watch courses on the “smaller” smartphone screens to the largest of TV displays with SD and HD video to support your viewing preferences. Since content is delivered in native web technologies, users do not have to depend on Flash or other plugins.

We have also migrated the Academy to the leading open source content management system and adopted the use SSL throughout the Verification Academy to make it more secure.

When we first started the Verification Academy, we did not know how large the community would grow nor could we predict the demands the community would place on the resources to support it.  Today, there are almost 12.5K users making it the largest single site to support the verification professional.  The changes we have made to the internals of the site show a speed improvement of over 400% by exploiting a commercial content delivery network to handle large media. 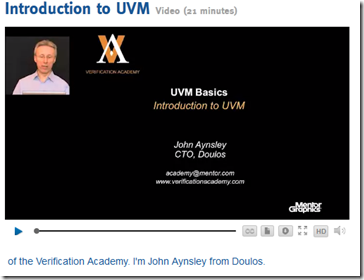 And for many members, where English is a second language, the video captions, when offered, are in plain text.  Registered users can click on the picture to the right to see the UVM Introduction and enable closed caption to see how the text appears right below the video.  (Or, from reading the text below video in the picture to the right, you can see John is introducing himself at the moment of this screen capture.)

We have also made big improvements to searches.  The searching facility now scans across all content at once, from the forums, to the UVM/OVM Cookbook and presents the information to you in an improved way to allow you to filter the results to focus on just that you want to know.

Leave the House With a Clean Design September 14, 2021 Wouldn't it be great if there were something that would stop you from leaving the house wearing mismatched clothes -…
Getting your Safety Architecture just right February 4, 2022 Introduction In a recent industry survey, roughly 40% of ASIC and FPGA project starts had functional safety part of their…
Clearing the Fog of ISO 26262 Tool Qualification April 13, 2022 Developing products to the ISO 26262 standard requires many activities across multiple disciplines. One of those activities is ensuring the…

This article first appeared on the Siemens Digital Industries Software blog at https://blogs.sw.siemens.com/verificationhorizons/2012/10/16/introducing-verification-academy-2-0/