“How did you get involved in standards,” I was asked.

On a business trip to India in 2009, I was asked to come by the Mentor office in Noida to meet with some “freshers” and other participants in Mentor’s Displaced Worker Program who were in the middle of a SystemVerilog training.  As one of many who have been engaged in the development of the SystemVerilog (aka IEEE Std 1800™-2009) standard the past decade, they were curious to know how I became involved in the development of this standard.

“How did you get involved in standards,” I was asked.

“My work on SystemVerilog comes from an early exposure to IEEE standards, much like you are getting today,” I told them.

In the late 1970’s a visiting lecture from Hewlett-Packard spent a year at UC Davis where I went to school.  One of the courses I took was a hardware interface to computers course that borrowed from the Hewlett-Packard Interface Bus (HP-IB).  While we all called the protocol HP-IB, it was already an IEEE standard.  Today it is known as IEEE Std 488.1™-2003. 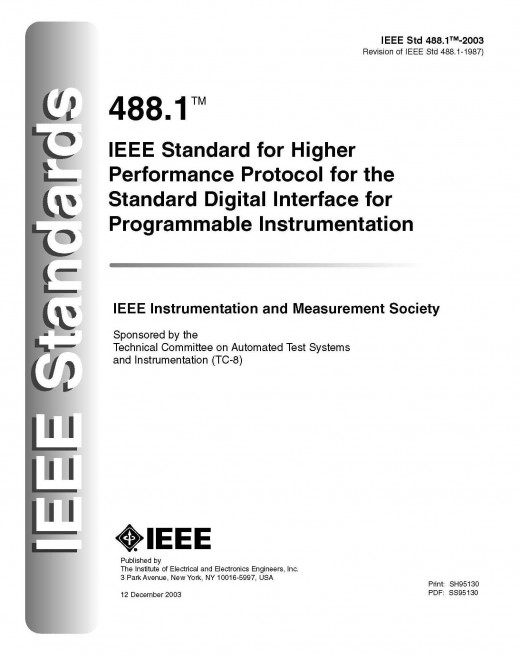 In addition to the normal material that had to be purchased for the class, I also had to buy a copy of the IEEE standard.  My first thought was the standard was expensive!  When looking inside the standard, it looked more like a someone used an IBM Selectric typewriter to write it and inserted hand-drawn state diagrams.  Maybe I bought a draft of the standard instead.  This is not at all the IEEE standards of today.

Recently I visited IEEE Xplore and downloaded the current standard and the content, as I would expect, looks nothing like the one I bought for my class.  Print was professional as all the standards look today.  Even the state diagrams are computer generated.

This was my first IEEE standard I bought, studied and built prototype interfaces to connect.  While one might have expected we would have spent 100% of our course time on the application of what we were learning, we did not.  We got a dose of indoctrination on the importance of standards.  “There may be times in your professional career where you may need to volunteer on standards development: Do it,” we were told.

This is the story I related to those learning SystemVerilog in Noida.  I told them the knowledge they gain may prove to be indispensable in the work they do in the years ahead.  But thank you for the question on how I got involved in standards, as it reminds me I should encourage you to be mindful of standards in your future.  Let me pass on what I learned from Hewlett-Packard that if there is a time in your professional career where you  may need to volunteer for standards development: Do it.

My Mentor, In Pectore

In late 2006, my home phone number rings.  I answer.  “Hi, this is Don Loughry calling on behalf of the IEEE and I have some good news to share with you.”  “What is the good news,” I ask.  “You have been elected to the IEEE Standards Association Board of Governors.  As past chair it is my privilege to bring you this news,” he says.  […] “Thank you, I look forward to serving,” I said as I concluded the call.

Many weeks later, my office number rings and I answer.  “Hi this is Don Loughry calling.  Dennis, is this you,” he asks.  “Yes, this is Dennis,” I say.  “Did you see the email I sent to you asking if you would join the Charles Proteus Steinmetz awards committee,” he asked.  “No, I can’t recall seeing that email.  Does your email come in with your first or last name listed,” I asked.  “Neither,” Don told me.  “You will see my email address as ‘Sunkist,’” he said.  “Oh, I thought I got some message from the ‘orange company’ and did not read it.  Let me do that now,” I said.  And, yes I joined the committee.  [From this moment on, Don Loughry was known to me as Sunkist, though I never told him.]

Not too long ago, I related the story of getting involved in standards – the story above – with the now chair of the IEEE SA BoG, Steve Mills.  Steve is with Hewlett-Packard Co. and told me that standardization of HP-IB/IEEE 488 was the work of Don Loughry.  He was also instrumental in setting a corporate culture that was pro-standardization and Steve told me the encouragement I got  to “think standards” while in college is “all Don.”

Interesting, I thought.  How I got here has a lot to do with what Don Loughry has done.  This was not self evident to me, and kept in secret, in pectore, to me and Don for that matter.  Don, my mentor, in pectore.

As you have read the title of the blog, you know there is some sad news to share.  This is it:

Don passed away about a month ago.  And as I write this, family and friends plan to gather this weekend to remember him.  While his life will be recounted by personal and professional accomplishments extraordinaire – and Don’s are certainly substantial by any measure – his ripples on the pond of life continue to radiate and touch many.  In my case, his call to volunteer for standards has become my endeavor.  As Don has called to action, I have with those I met in Noida in 2009, as I do now with you dear reader of this blog.

He launched the IEEE Standards Association and served as its first president.  We all benefit from his vision.  Standards developers around the globe are grateful for this.

And as for Don appointing me to be a member of the Charles Proteus Steinmetz committee, I went on to be its chair for a couple years.  I am grateful for his trust.

As an aside, Don was given the 2003 Steinmetz award.  Having been on the committee and its chair, I was offered one action of privilege this year.  And that was to appoint myself to be a member of the committee a last time as its past chair.  I appointed myself.  Thank you Don for your initial appointment to this committee.

The week before last, while in India, after concluding a long week of meetings for the IEEE SA Corporate Advisory Group, it was bittersweet as I dialed into my last Steinmetz committee meeting.   I could not finish the call in my hotel room before having to check out and share a ride to the Bangalore airport.  Therefore I continued the call on my mobile phone in the car.  I thank my friend from Broadcom for sharing his car to the airport with me.  And, knowing Broadcom may like 802.3 a bit, perhaps I can be forgiven for this minor annoyance – knowing the rest of the story now.  After all, “How did I get here?”  How did I become to be on the phone for this call at this moment?  In large measure by Don, the same person who helped sow the seeds that Broadcom reaps today with 802.3.

Yes, I know why Don’s email address has “sunkist” in it.  I came to learn why when we were on the Stienmetz committee together when he participated as “past chair.”  And no, it is not about oranges.  However, oranges will be one of those things that will remind me of him.  So why it is his email address that way?  Well, let’s say that is one thing I will keep in pectore.

Join us for Accellera Day India 2020 October 11, 2020 Accellera Day India 2020 brings focus to the pressing design and verification challenges you have and the evolving standards being…
Performance Profiling How-To (Make My Testbench Faster) August 30, 2021 Here’s the situation… You’re DV lead. You and your team are at month 10 of a 12 month development cycle.…
A UVM Scoreboard: Does it really have to be that hard? November 16, 2021 UVM Scoreboards don't have to be hard But I'm getting ahead of myself. This week I gave up on my…

This article first appeared on the Siemens Digital Industries Software blog at https://blogs.sw.siemens.com/verificationhorizons/2012/03/22/how-did-i-get-here/