In my previous blog, I introduced the 2010 Wilson Research Group Functional Verification Study (click here). The objective of my previous blog was to provide a background on this large, worldwide industry study. The key findings from this study will be presented in a set of upcoming blogs.

In addition to the industry moving to smaller process geometries, the industry is also moving to larger design sizes as measured in number of gates of logic and datapath, excluding memories (which should not be a surprise). Figure 2 compares design sizes from the 2002 Collett study (in orange), the 2007 Far West Research study (in blue), and the 2010 Wilson Research Group study (in green). 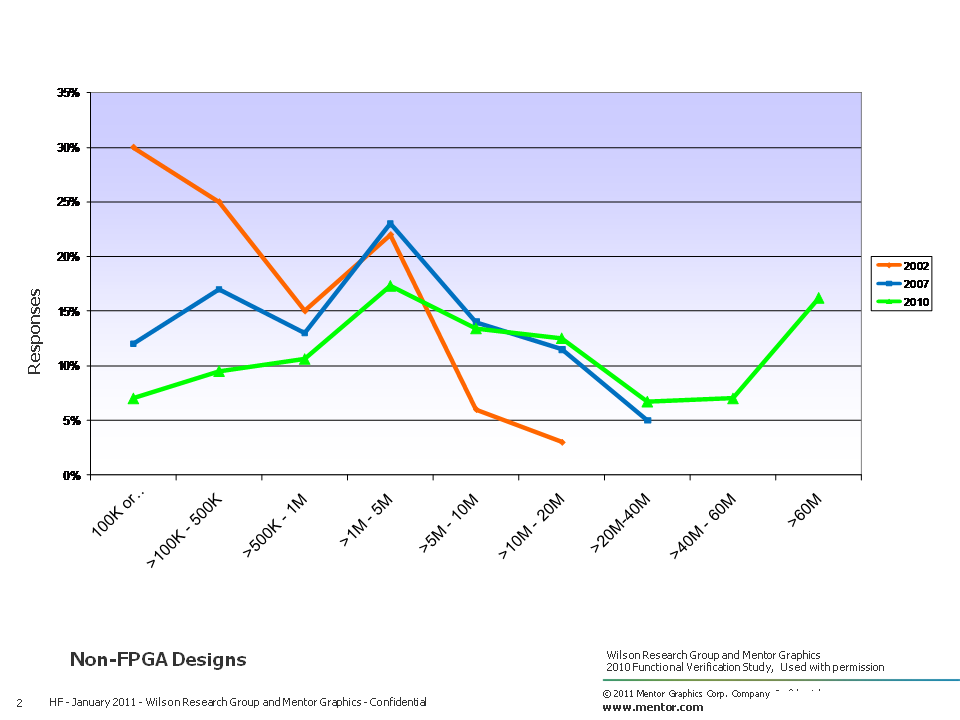 When compiling and analyzing the data from the study, in addition to calculating the mean on various aspects of the data, I decided to calculate the median for trend analysis. In Figure 3, I show the median design size trends between the 2002 Collett study (in orange), the 2007 Far West Research study (in blue), and the 2010 Wilson Research Group study (in green). My objective in calculating the median is that the resulting value partitions the data into equal halves, and enables us to easily see that half the designs developed today are less than 6.1M gates, while the other half are greater than 6.1M gates. Obviously, we can see that gate counts have increased over the years, yet there is still a significant number of designs being developed with smaller gate counts as indicated by the median calculation. 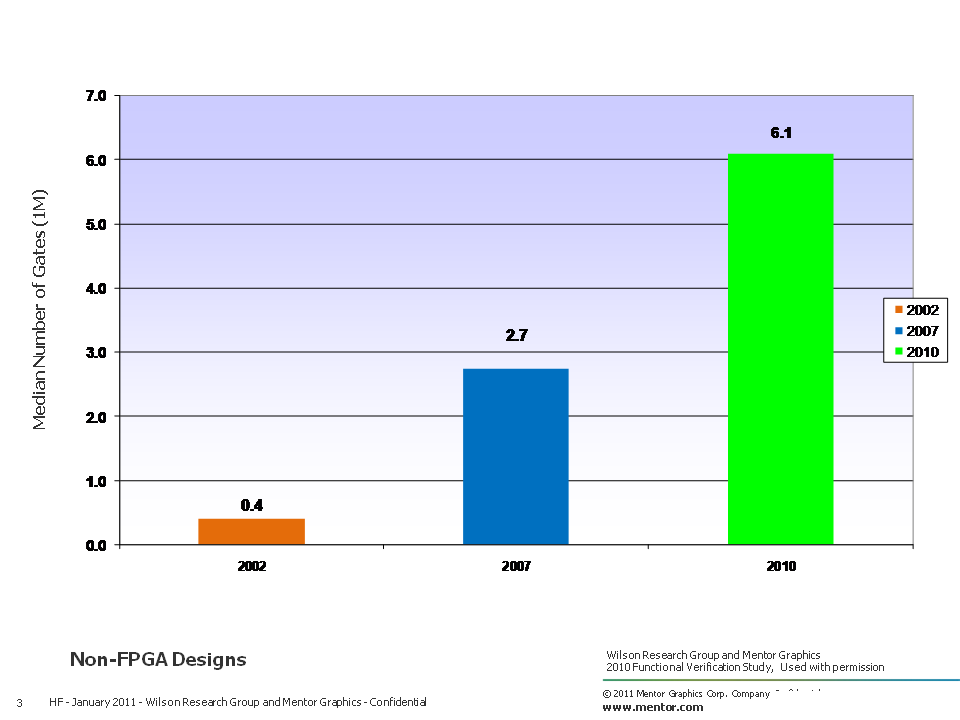 Figure 4 presents the current design implementation approaches as identified by the survey participants, which includes both FPGA and non-FPGA implementations. 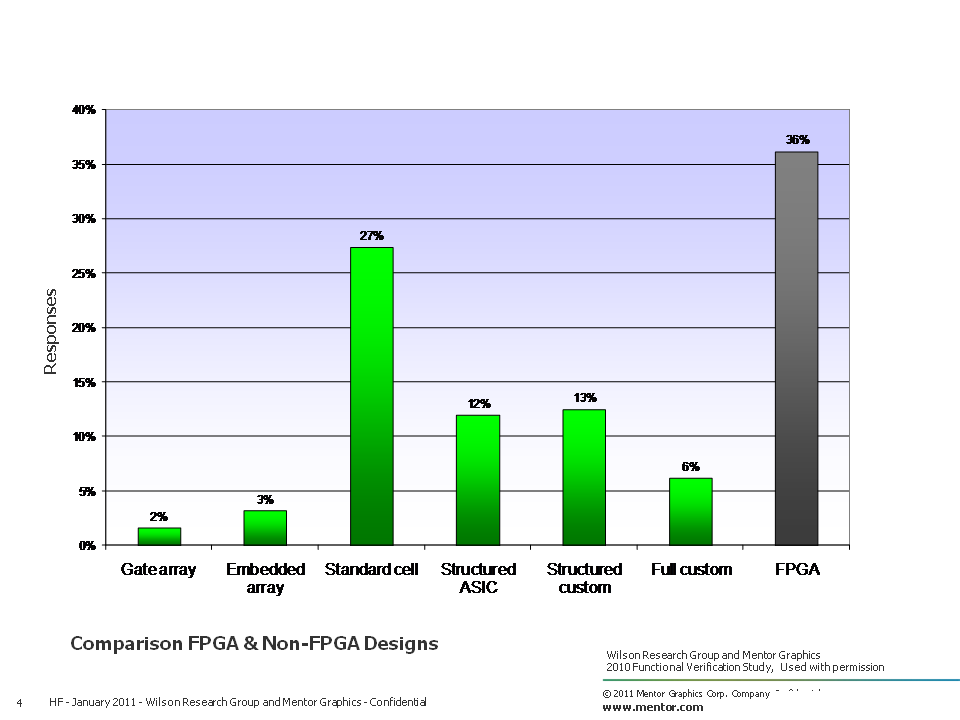 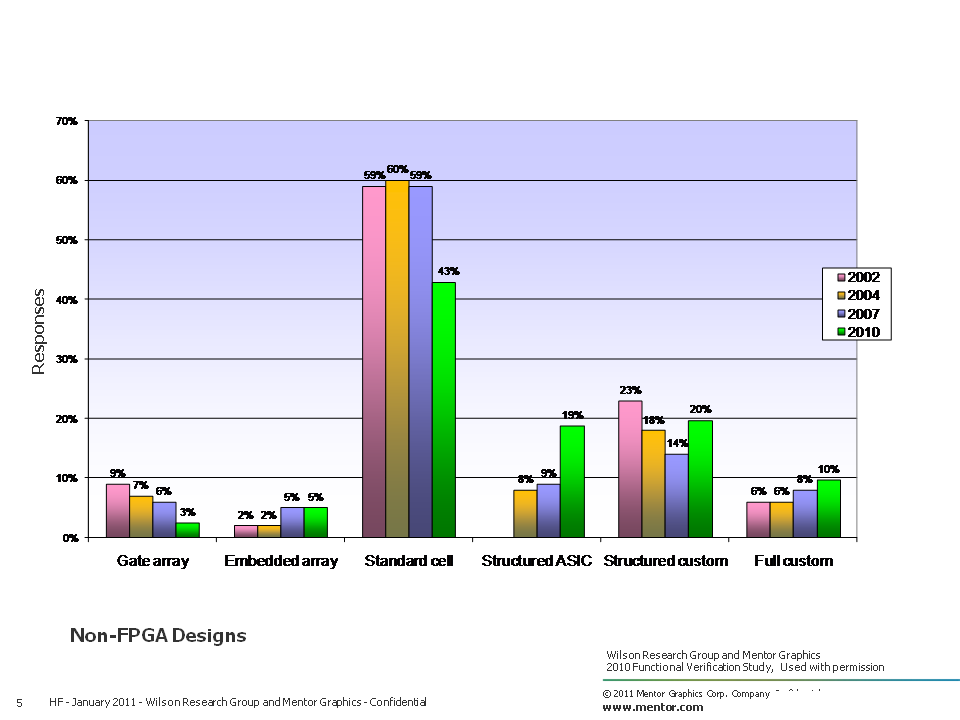 We are not able to present trends for FPGA implementations, since none of the prior studies included FPGA survey participants.

This article first appeared on the Siemens Digital Industries Software blog at https://blogs.sw.siemens.com/verificationhorizons/2011/03/30/part-1-the-2010-wilson-research-group-functional-verification-study/