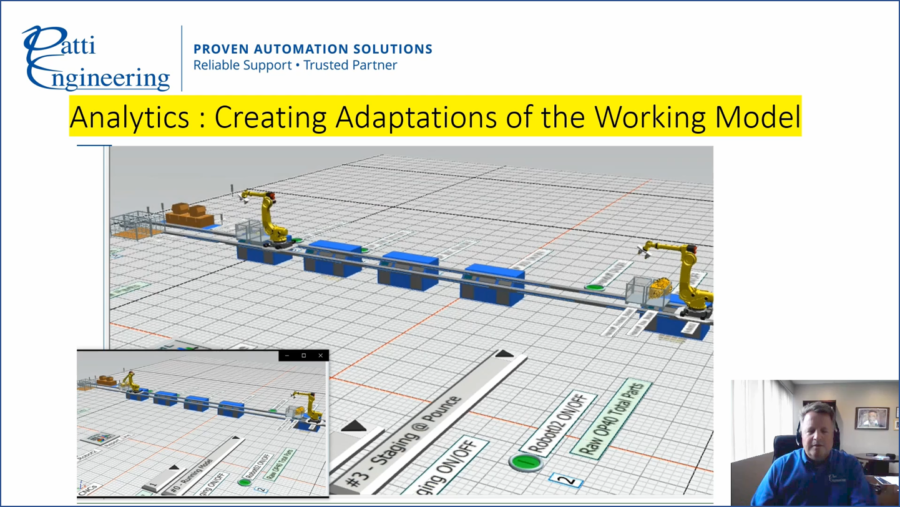 Patti Engineering uses MindSphere®, the industrial IoT as a service solution from Siemens, and Plant Simulation in the Tecnomatix® portfolio to uncover new throughput opportunities

Patti Engineering’s client, a leading auto manufacturer, had a production line for the machining of transmission parts. The line included five parallel computerized numerical control (CNC) devices fed by two robots. The auto manufacturer had struggled with the efficiency of this setup since its deployment and wanted to get a higher throughput from the system.

Because the throughput capacity of the main CNCs was insufficient to meet demand, the manufacturer added an additional CNC for the upstream operation but was unable to add an additional CNC for the downstream operation because the real estate had been limited by the robot rail. Ultimately, the customer didn’t gain the level of throughput that they expected. They needed to optimize throughput using their existing equipment.

Patti Engineering came in to create a digital twin of the physical environment on which they could run various scenarios to improve throughput. The project included the implementation of MindSphere to collect data from the shop floor, the development of a digital twin with Tecnomatix Plant Simulation, and the delivery of analytics on the digital twin to suggest and create improvements into their production floor.

First, the collection of operational data from the CNCs and the robots was set up to send to MindSphere. The types of data included process times by part serial numbers, machine blocked and starved durations, and the like. Basic overall equipment effectiveness (OEE) data and alarms were displayed via the Patti Engineering MindSphere app for CNCs.

The digital twin – creating the model

To create the digital twin model, the team imported 3D files straight into Tecnomatix Plant Simulation, and used built-in objects like fencing, stairs, and part racks. Creating the model not only included the physical representations, but the programming behind them, such as robot positions and part processing times.

Once the digital twin matched the real-world line physically, the line needed to be replicated logically, including robot paths and station priorities. By reviewing programming and videos of the line, the digital twin was refined to behave more like the physical system, such as with time for a robot to move from one location to another. Further refinement accommodated other aspects of the production floor, for instance how often parts appeared.

Early data analysis using the digital twin drove the collection of additional data points to explore potential sources of lost productivity. By collecting the delivery times and part types from MindSphere, the digital twin could be tested against the real-world counterpart, and iterated until it matched precisely.

Adaptations of the original process were simulated to reflect possible scenarios to increase throughput.

After the adaptations were created, all variations of the physical system were run through a series of tests to see impact on throughput. The tests simulated station down time and variations in production runs to provide a variety of scenarios against which to compare the adaptations. Patti Engineering found that in some adaptations there were no significant improvements over the original. Eliminating those possibilities saved the customer the time and cost of making changes that would not benefit their bottom line.

Patti Engineering found the most cost-effective solution to increase throughput and improve the manufacturer’s results. Their advice to manufacturers looking to do the same includes:

Ultimately, Patti Engineering found an adaptation that sped up the overall process. By changing the route and waiting periods of the robots and having them service the operations differently, they were able to increase throughput.

Siemens continues to partner with leaders across manufacturing industries to build products and systems that improve sustainability, safety, quality, and compliance, allowing them to better serve their customers, and contribute to a more prosperous world.