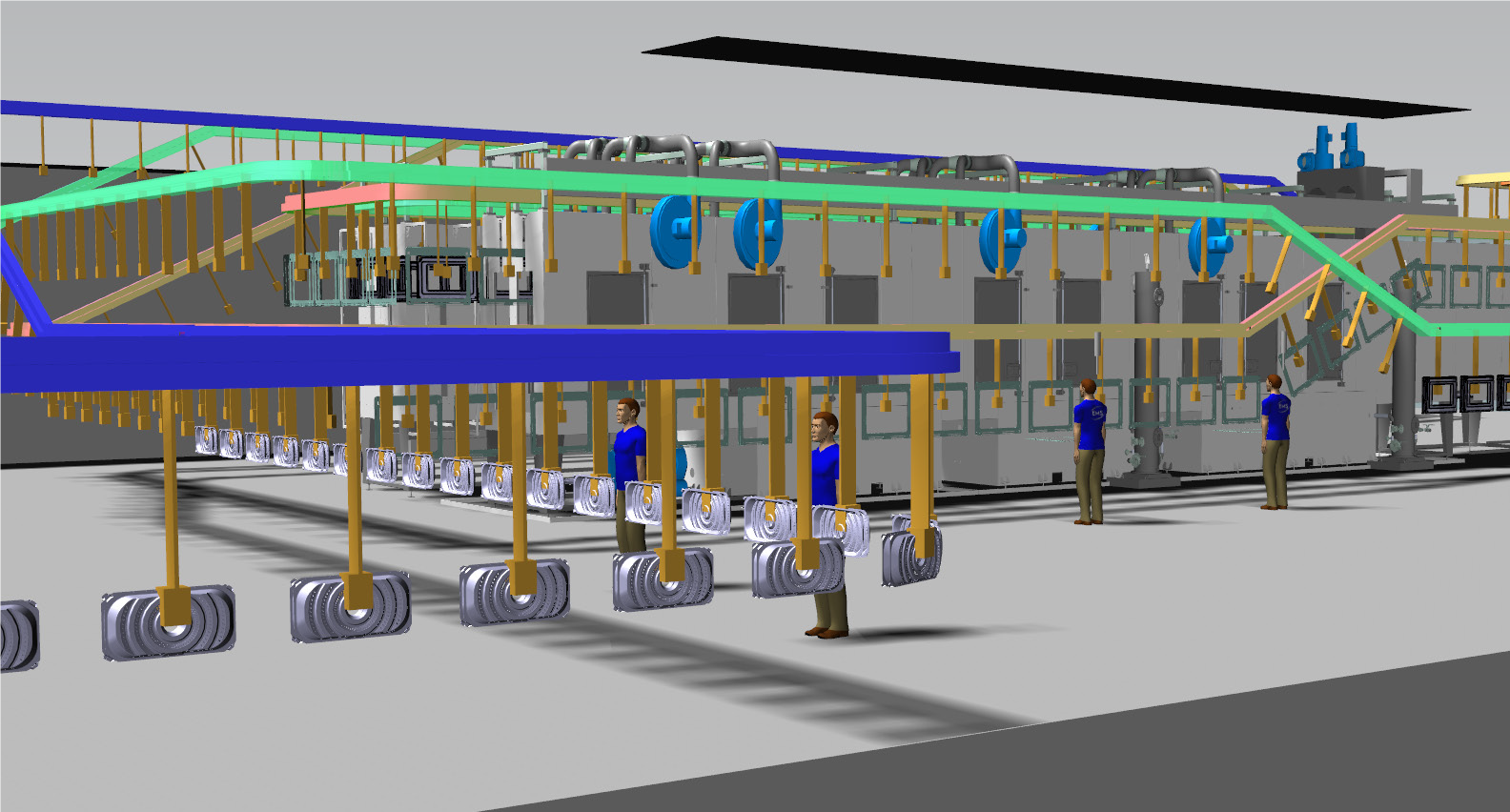 Based in Stockholm, Sweden, Electrolux AB sells appliances for household and commer­cial use in 150 countries around the world. With around 58,000 employees and 46 pro­duction sites, the company develops and manufactures products of numerous brands: in addition to Electrolux, the top brands Grand Cuisine, AEG, Zanussi, Frigidaire and Westinghouse enjoy a particularly high reputation.

In 1996, the German AEG brand was acquired from Daimler Benz, together with several divi­sions and locations of the group. This is how the factory in Rothenburg ob der Tauber, founded in 1964, came to Electrolux, which today produces 600,000 stoves and 1,400,000 cooking ranges per year for the European market.

“We attach great impor­tance to implementing in detail the essential product characteristics of each brand in development and production,” reports Bernd Ebert, director of Global Manufacturing Engineering − Food Preparation at Electrolux. Based in Rothenburg, Ebert ensures that all Electrolux cooking appliance factories imple­ment uniform processes and systems.

The factory is too expensive to use as an experimental field. To test new concepts, there are efficient simulation tools that make production downtime superfluous.” Bernd Ebert Director of Global Manufacturing Engineering − Food Preparation Electrolux

As part of a comprehensive digitalization strategy covering all areas, 11 digital manu­facturing projects are on the agenda of the Swedish global corporation. Ebert has assumed responsibility for two global proj­ects with the highest priority. They aim to create “digital twins” of all manufacturing sites: In the virtual manufacturing project, an advanced planning tool was selected and introduced for early design verification to develop products that are production- and assembly-friendly. For example, assembly sequences and movements will be planned and optimized three-dimensionally to pre­vent collisions. The prerequisite for this is the development of three-dimensional fac­tory layouts, which is the focus of the sec­ond project, 3D factory layout. The layouts will be created using a standard factory planning tool that can simulate both the plant and the material flow on the basis of 2D data in order to optimize capacity and efficiency.

Software selection began in 2014, when only a few had powerful software for 3D factory planning. A small, specialist team led by Ebert worked closely with the company’s IT department in Stockholm. Starting in 2015, Teamcenter from Siemens PLM Software was deployed there as a strategi­cally important product development plat­form for product lifecycle management (PLM) at Electrolux. Discussions about Siemens’ future strategy led to an offer to test a pre-release version of the 3D layout software Line Designer in an early adopter program.

Siemens was given the opportunity to use original data to build a showcase demon­strating the performance of the software on real problems. As a result, Line Designer was selected in conjunction with solutions in the Tecnomatix® portfolio, including the Process Simulate solution.

The main reasons for this decision were the advantages of a tight Teamcenter integra­tion of these solutions: “We can save all resources created with Line Designer as libraries in Teamcenter, manage them and make them available to all users worldwide,” explains Ebert. “This way we preserve an entire infrastructure of software and hard­ware including training material and can build on the existing users´ experience with Teamcenter.” The expected results were a close alliance for product development and a global, common platform for factory plan­ning and material flow optimization.

In a pilot project carried out in Rothenburg in 2016, employees received training by Siemens and developed, among other things, a new assembly line and automated housing assembly with Line Designer.  Ergonomics studies were carried out with Process Simulate and cycle times were suc­cessfully optimized using simulations. “The Tecnomatix and Teamcenter solutions have proven themselves in the best way,” reports Ebert as project manager. “At the same time, we have gained valuable experience for a worldwide deployment.”

The core team has now trained specialists for each of the three software solutions, who can provide advice and support to the decentralized employees at the locations. The system areas created with Line Designer, such as conveyors and lifts, or models of material transport trolleys and other devices, can be parameterized. “By making the 3D models and scenarios avail­able worldwide, we save lots of work,” reports Ebert. “After adjusting the parame­ters, they are simply re-used elsewhere. This brings us almost automatically closer to the desired standardization of processes and systems across the product lines − cooking, washing and dishwashing, drying and cooling/freezing − as well as the sectors USA, South America, Asia/Pacific and Europe.”

“Based on the experience gained from the pilot project, the worldwide rollout has now been carried out in waves, each of which includes the intensive training and familiar­ization of the employees at one location,” says Ebert. “In order to secure our major projects, we initially selected four locations with high investment volumes.”

One location involves the complete con­struction of a new refrigerator factory in Anderson, South Carolina, in which refriger­ator production is to be concentrated on the American continent by mid-2019. There, a higher degree of automation should save around 30 percent of human labor. Many processes were planned with Tecnomatix in order to develop a new auto­mation concept, to plan the factory cor­rectly at the first attempt and to secure the immense investment.

A very time-consuming production area is the plant for foaming the refrigerator walls with hardening. All areas before and after are based on the process times there. In order to design this bottleneck correctly at the first attempt, the process was mapped and simulated as a one-piece flow. “A lot of details had to be taken into account, such as different materials and different models,” says Ebert. “To depict all this was very time-consuming, but it was worth it.” The accu­rate results of Plant Simulation eliminate the need for large buffers, saving approximately $2,000,000 by having one conveyor and one high-bay warehouse for 5,000 refrigerators.

After foaming, the assembly processes branch to four lines. Here, the train routes of the material flows were planned, simu­lated and optimized with all purchased parts of the parts lists for 30 models of the modu­lar product design that go from the truck to the assembly lines. “An employee of Siemens has laid the foundations for the train routes. But in the meantime, our mate­rial flow is improved daily by our own employee − we have already achieved our effectiveness targets.”

With Process Simulate, the employees also planned robot cells that would take over some of the previously manual processes. “Even if the cells are not yet completely detailed, we can decide with a high degree of certainty whether we need one or three robots,” says Ebert. The high planning reli­ability is conveyed to the management in 3D scenarios and videos.

“A big investment requires a lot of persua­siveness,” Ebert asserts. “With the good visu­alization possibilities of Tecnomatix, I can show the management an early stage of planning that makes the processes plausible. The 3D technology helps with the verifica­tion of assembly concepts as well as with the selection of suppliers for automation solutions and provides insights that I didn’t have before.”

The first projects have proved that Tecnomatix and Teamcenter tools can be used to solve tasks and achieve goals. However, the employees deal with the pow­erful tools regularly. “We need specialists to take on new roles in our global team,” Ebert says. “For successful standardization, every topic must be described centrally.” Further major projects are now also pending in Europe.

“The factory is too expensive to use as an experimental field,” Ebert says, referring to Professor Dr. Hans-Jürgen Warnecke, a well-known scientist and former president of the Fraunhofer Gesellschaft in Germany. “To test new concepts, there are efficient simu­lation tools that make production downtime superfluous.” This article first appeared on the Siemens Digital Industries Software blog at https://blogs.sw.siemens.com/tecnomatix/electrolux-implements-worldwide-3d-factory-and-material-flow-planning/