It’s always nice to get some comments on your blog. When starting writing blogs about 4 years ago (2022 edit: 13 years ago) I was told that so long as you write about something that you’re interested in, then others will read it. Comments are the echo to what otherwise would be a Demosthenes type shouting at a roaring sea of disinterest. So when a colleague here at Siemens, Dave Roberts, commented on Part 3 of this series as to whether the flower pots might act as storage heaters and thus provide additional value, I was obliged to use simulation to investigate this. 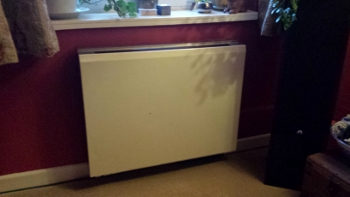 Storage heaters work on the concept of soaking up heat from cheap night time electricity in a high thermal mass matrix (posh way of saying ‘bricks’). They weigh a tonne (almost literally). Then, throughout the day that heat leaks out to warm the room. If the heaters have lost all their heat by the next night time charge then it’s a very efficient way of distributing the cheap heat (in time and space). They do have their downside, they tend to heat the room up less as they lose more heat, later in the day the room temperature does tend to drop as there’s not much heat left to leak out of them.

Not being on the gas mains, such storage heaters form the main part of the heating of my family’s house. And yes, some of them are placed under the windows, but not enough!

Back to Dave’s Question. Easy enough to do in Simcenter Flotherm, simply deactivate the object that represents the flame and continue the full 3D CFD transient simulation on from the 4 hour point it reached with the candles on. This time let’s just look at how the air at the top of the room and the air at the bottom of the room change after the candles have gone out.

With no flower pots the air temperature drops down pretty quickly after the candles go out: 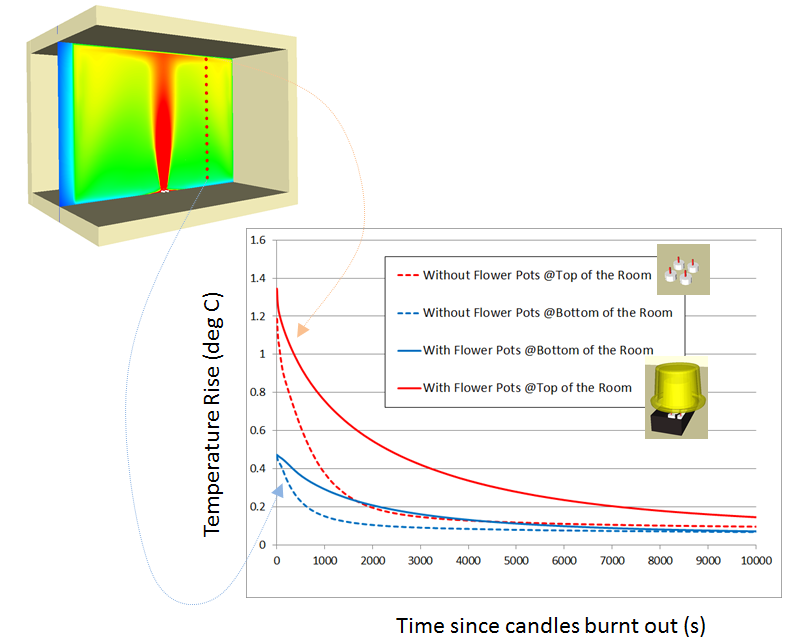 What little heat is left in the air is quickly drained out through the still cold walls.

With the flower pots in place there is a very marked improvement. All those Joules of energy stored in the ceramic continue to leak out to the room, well after the candles have gone out, supporting the air temperature and reducing it’s inevitable cooling down. Even after an hour the air temperature rise is about twice what it would have been otherwise.

A double whammy of not only trapping over 15% more of the power that would have been lost directly to the walls without flower pots, but also storing this extra heat to extend the benefit of the flower pot heater arrangement well beyond the four hour life time of the tea lights.

I’m hoping for a triple whammy when we come to look at the actual ‘felt’ temperature, more on that in the next part.

Flow Visualization and the Beauty of the Vortex Dome January 14, 2021 Fluids tend to be transparent, which is problematic for flow visualization. Rheoscopic fluids get round this by seeding the flow…
Demystifying Electromagnetics, Part 1 - Fields and Analogies March 2, 2021 This blog series will strive to demystify (low frequency) EM by way of pictures and analogies, with as few equations…
Demystifying Electromagnetics, Part 8 - Losses September 8, 2021

This article first appeared on the Siemens Digital Industries Software blog at https://blogs.sw.siemens.com/simulating-the-real-world/2013/12/09/heat-your-home-office-for-8p-a-day-part-3a-was-dave-right/