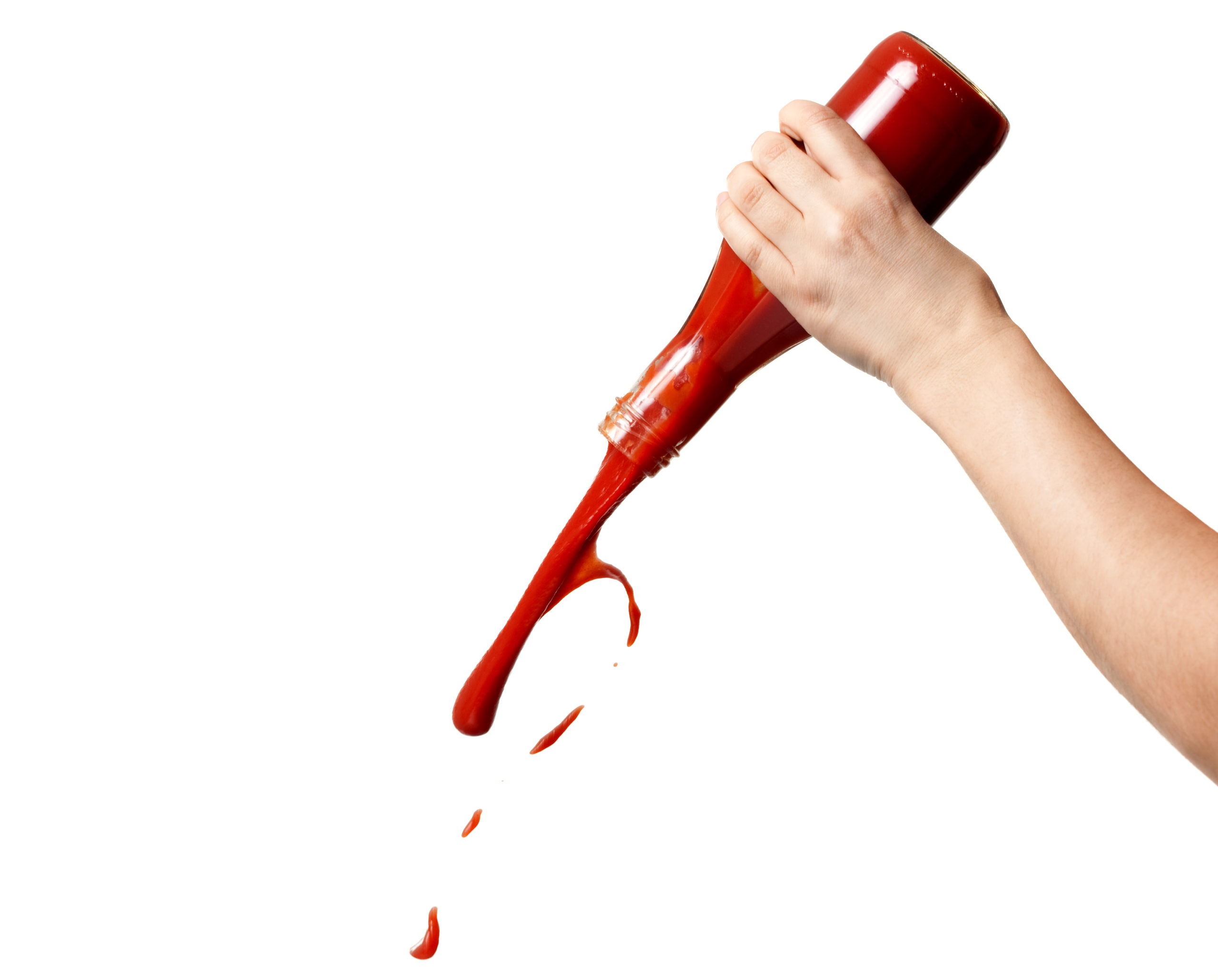 We’ve all been there… a beautiful summer’s day, burger in hand and then the great tradition starts of trying to apply ketchup! Do you bash the bottle trying to get some out or shake it gently? Whatever you choose the inevitable will happen, initially nothing, and then suddenly a great big dollop of ketchup will come flying out, miss the burger and end up all over your clothes!

Ketchup is a weird fluid, however we don’t often think about this too much in everyday life. Scientists and engineers encounter this in a number of scenarios though and must try to understand these types of fluids to create successful solutions.

To better understand this weirdness, try to imagine a glass ketchup bottle, but instead of it being filled with ketchup it is filled with a solid, say concrete for example. You could shake that bottle all day and the only way you would get it out is by breaking the bottle. If we take the same example but fill the bottle with liquid, let’s choose water, when we tip the bottle over the water will just pour out easily. Ketchup shows a combination of these two behaviours, so if you were asked to describe it, would you call it a solid or a liquid? The correct answer to this is that it has properties of both so we would usually refer to it not by its state but by calling it a fluid.

Regular fluids such as water and oil respond to force linearly. Imagine you have a plastic bottle filled with water, if you push on the sides you can make the fluid flow, if you push twice as hard the fluid will move twice as fast. The technical name for these are Newtonian fluids.

Now what about the fluids that don’t follow this rule. Well these are Non-Newtonian fluids. We encounter these often in our everyday lives but don’t often give them much thought. Examples of these are mayonnaise, custard, honey, toothpaste, paint, blood, shampoo, slime (which you may remember from our previous blog post) and our favourite… ketchup.

These fluids respond to force non-linearly, this mean that the thickness can change depending on several factors, mainly the force that is applied, the time that it is applied over and the speed that you apply the force. Ketchup is actually Non-Newtonian in two different ways, firstly the harder you push the thinner it gets. This behaviour is particularly confusing as it initially behaves like a solid but when the critical force is exceeded it suddenly becomes hundreds of times thinner. That is why when you hit the bottle you get large dollops of ketchup everywhere.

Your second option is to gently shake the bottle, this is in effect applying a small force which is below the critical point. When applied over a longer time the ketchup will start to flow, this is also easier and likely to be less messy but you need to be patient here, and who can be patient when there is food around?

Scientists and engineers, such as us here at Siemens, who study fluids, are still investing time and effort to understand Non-Newtonian fluids better to comprehend why they do what they do. Ketchup is only one example, while it gets thinner when force is applied some fluids such as peanut butter and oobleck (mixture of cornstarch and water) do the opposite and become thicker. Some can appear to do magic and continue to pour themselves out of containers or climb rotating rods due to their strong polymer chains.

In manufacturing, time is precious, you need to get thousands of bottles of product made an hour. This can be simple for bottled water as it easily flows but shampoo, ketchup or paint are entirely different as we have just shown. By using best in class tools to simulate this process, problems and solutions to these can be found early before costly mistakes are made.

But let’s get back to our original problem, how should we get ketchup out of a bottle? Now some of you are probably screaming to tell me that you have plastic squeezy bottles, but the humble glass bottle is so much better for the environment. So how can we be environmentally friendly and still get our ketchup onto that delicious burger?

Well the best way that we currently know is to leave the lid on, give the bottle a good shake to mix up the tomato, water, vinegar and sugars. Then remove the lid and the ketchup should pour out nice and easily. However if you have a better way please let us know in the comments.

4 Myths about AI in CFD April 6, 2021 As Artificial Intelligence (AI) has become more ubiquitous in our everyday lives, so too has confusion about what it is…
Model-based design from ICEs to ICUs: Bridging the… November 10, 2021 The events of the past few years have turned global attention towards health and, more specifically, healthcare. From the images…
10 insights from rocket CFD for a mind-blowing moonshot July 29, 2021 This is your guide to a successful moonshot project - with 10 insights that only rocket CFD (Computational Fluid Dynamics)…

One thought about “Why is ketchup so difficult?”

This article first appeared on the Siemens Digital Industries Software blog at https://blogs.sw.siemens.com/simcenter/why-is-ketchup-so-difficult/