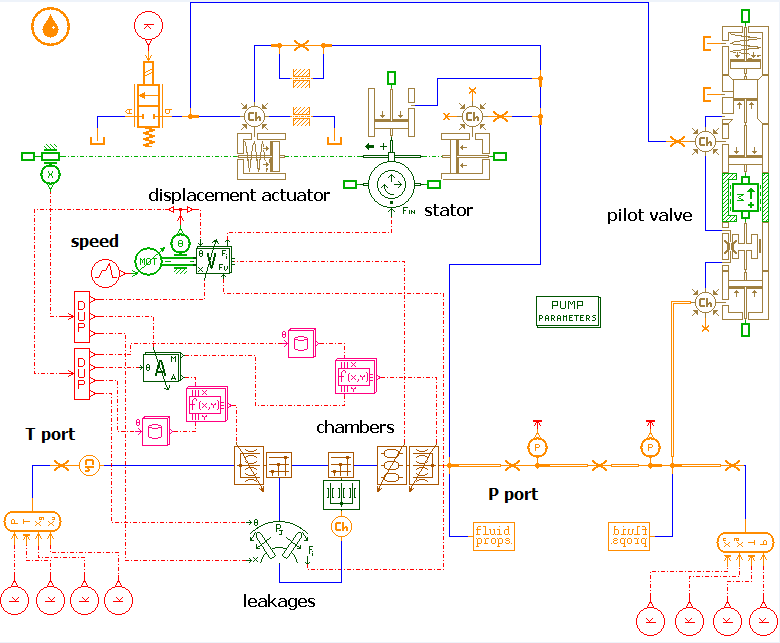 The Fluid Power Research Laboratory (FPRL) at the Department of Energy (DENERG) of the Politecnico di Torino has specific competence on modelling, simulation and testing of fluid power components. It was founded in the middle 1980s and its mission is to disseminate the fluid power culture in industrial engineering studies and to perform research activities on fluid power systems and components.

In this context, the simulation plays a fundamental role, with different aims depending on the field: industrial, research or didactics.

In the teaching field, more simply, the simulation helps understanding the ways of operating of a component or of a system.In the fluid power field the simulation is mostly, but not only, focused on the behavior of the fluid inside the system and on how the hydraulic energy is converted in mechanical energy and vice versa, hence the physical quantities of interest are pressures, flow rates, torques, speeds and so on. The simulation can be performed using different levels of detail in terms of phenomena taken into account or using a different spatial discretization, therefore we talk about 0D (lumped parameter), 1D or 2D-3D (CFD) models. The lumped parameter simulation consists in assuming that each control volume, into which the computational domain is split, has homogeneous properties, such as pressure and temperature. It is the most popular approach, since represents the best compromise between accuracy and computational time.

The Politecnico di Torino has been one of the first Simcenter Amesim users in the world, since we started using the first preleases (based on the writer’s knowledge, at least the version 0.3) of the software in 1995. At that time, the software ran only on Unix-based operating systems and we installed it on a Sun Sparkstation 20 with a 50 MHz processor (a different era!).

First utilization for the simulation of gerotor pumps for lubrication

The first important project started in 1997 for the simulation of gerotor pumps for lubrication [1].

We made an extensive use of the tool Ameset for creating new customized libraries of submodels. Indeed, at that time the number of components available in the standard libraries of the official first release was very limited. A major innovation we adopted was the use of the vector approach for the simulation of the variable volume chambers of the pump [2].  In fact, thanks to the capability of Ameset of generating components able to exchange vectors, the idea was to create a library of hydraulic components (volumes, laminar and turbulent restrictors) where the number of elements, representing the number of variable volume chambers of the pump, is set simply by a parameter.

The advantage of this approach is that to change the number of chambers it is not necessary to modify the sketch of the model. This approach has been maintained for all other types of pumps studied over the years. The model of the gerotor pump, continuously improved thanks to the possibility to perform experimental tests, can be used for the evaluation of the real flow rate and of the pressure ripple, starting from the geometry of the gears, of the port plate and of the clearances. Sketch of a vacuum pump with the variable chambers simulated by a supercomponent.

Similar studies can now be performed on other pump types, whose list with the indication of the year in which the first model was approximately built follows: external gear pumps and swash plate axial piston pumps (1999) [3], bent axis pumps (2000), variable displacement vane pumps (2001) [4], crescent pumps (2005) [5] and single vane vacuum pumps (2012) [6].

This last component is used as vacuum source in the automotive brake booster and the working fluid is mainly air, but a small oil percentage is also present. Moreover at the start up, it is possible that one or more chambers could be completely filled with oil, hence the machine at the beginning works as a hydraulic pump. For the simulation, a special model of chamber able to work with an oil fraction ranging from 0% to 100% and to be connected with both hydraulic and pneumatic Simcenter Amesim standard libraries was developed.

We have also experienced the co-simulation between Simcenter Amesim and other software products. In particular in the axial piston pumps, a multibody simulation tool was used in 2006 for the study of the dynamics of the pistons [10], while in the vane pumps for lubrication (2008) for studying the contact/detachment of the vane tips from the stator track. The principle is to use Simcenter Amesim for the evaluation of the forces induced by the pressure on the moveable components, then to supply such forces to the multibody simulation tool for the evaluation of the current positions, taking into account the clearances. Finally, with the current values of the gaps, Simcenter Amesim evaluates the leakages and finally the pressure and the loop is closed. A variant of this methodology is constituted by the coupled simulation, where a single solver is used to solve the equations of both software products. This approach was implemented using LMS Virtual.Lab for the simulation of the mechanical system of a telehandler arm and with Simcenter Amesim for the simulation of the respective hydraulic circuit (2011) [11].

Another interesting experience was the use of the Labview® interface for the development of a Virtual Instrument (VI) for managing a servovalve test rig. Before testing the software on the real test rig, a model of a servovalve was built in Simcenter Amesim. The model was able to receive a real voltage input signal by means of a data acquisition card and to give as output the flow rate. In this way, it was possible to test the VI running on a different PC, using the Simcenter Amesim model as a virtual valve.

Worth of note is also the activity for the comparison of different types of lubricating pumps and displacement controls in terms of consumed energy in a NEDC driving cycle (2008) [12, 13]. The simulation was validated experimentally on a specific test rig for lubricating pumps able to reproduce, by means of closed loop controlled valves, the real load induced by the lubricating circuit supplied as data file.

Overall, in spite of the intrinsic limitations of a lumped parameter model, we have demonstrated how with a relatively few tunings performed through high time consuming CFD and FEM software products, it is possible to make a 0D model very effective in reproducing with a good accuracy the main phenomena [14]. The last improvement in our simulation models is the implementation of the gas transport and dynamics, in order to fully exploit the capability of the Thermal Hydraulic Library for the simulation of the dissolution and separation processes of the air in the oil. This activity is still underway.

Moving now briefly to the didactics, the Politecnico di Torino has a long tradition in the teaching of fluid power, in fact since 1979 about 10,000 students have attended specific Fluid Power courses. Simcenter Amesim is used mainly in the thesis activity. During a M.Sc. thesis, the student normally performs a detailed simulation of a complex component or of a whole hydraulic system that usually involves the use of Simcenter Amesim. However, a simple simulation can be also performed for a Bachelor thesis. The simulation can be also extremely useful for the lessons. For a better understanding on the working principle of a component or system, the lecturer shows some examples of results coming from the Simcenter Amesim model, such as steady-state characteristics of hydraulic power units or of some types of valves. Moreover the students are invited, by means of the Student Version of Simcenter Amesim, to reproduce on their own the model (even if this activity is not mandatory). A mandatory activity, instead, is the attendance in some courses (currently 4 sessions of 1.5 hours each in the course Automotive Fluid Power Systems at the M.Sc. in Automotive Engineering) to the simulation sessions. At first the lecturer explains the basics of the simulation environment (how to create the sketch, how to the set the parameters and to plot the results), then the students are asked to reproduce some models of valves by means of the Hydraulic Component Design (HCD) Library following the instructions reported in a brief tutorial.

And of course the students must also hand in the simulation results at the exam!

In  conclusion, at the FPRL we used and are still using different software products for the simulation of fluid power components and systems, but indeed most of the activities over the last 20 years have involved Simcenter Amesim.

4 Myths about AI in CFD April 6, 2021 As Artificial Intelligence (AI) has become more ubiquitous in our everyday lives, so too has confusion about what it is…
If you can’t take the heat… Simulate it! Reducing… June 10, 2021 Find out how to efficiently and accurately simulate VTM using Simcenter Engineering's multi-fidelity workflows.
How Simcenter system simulation is deployed in the… January 12, 2021 Learn from your peers how are the latest engineering developments taught in the academic world with a special focus on…