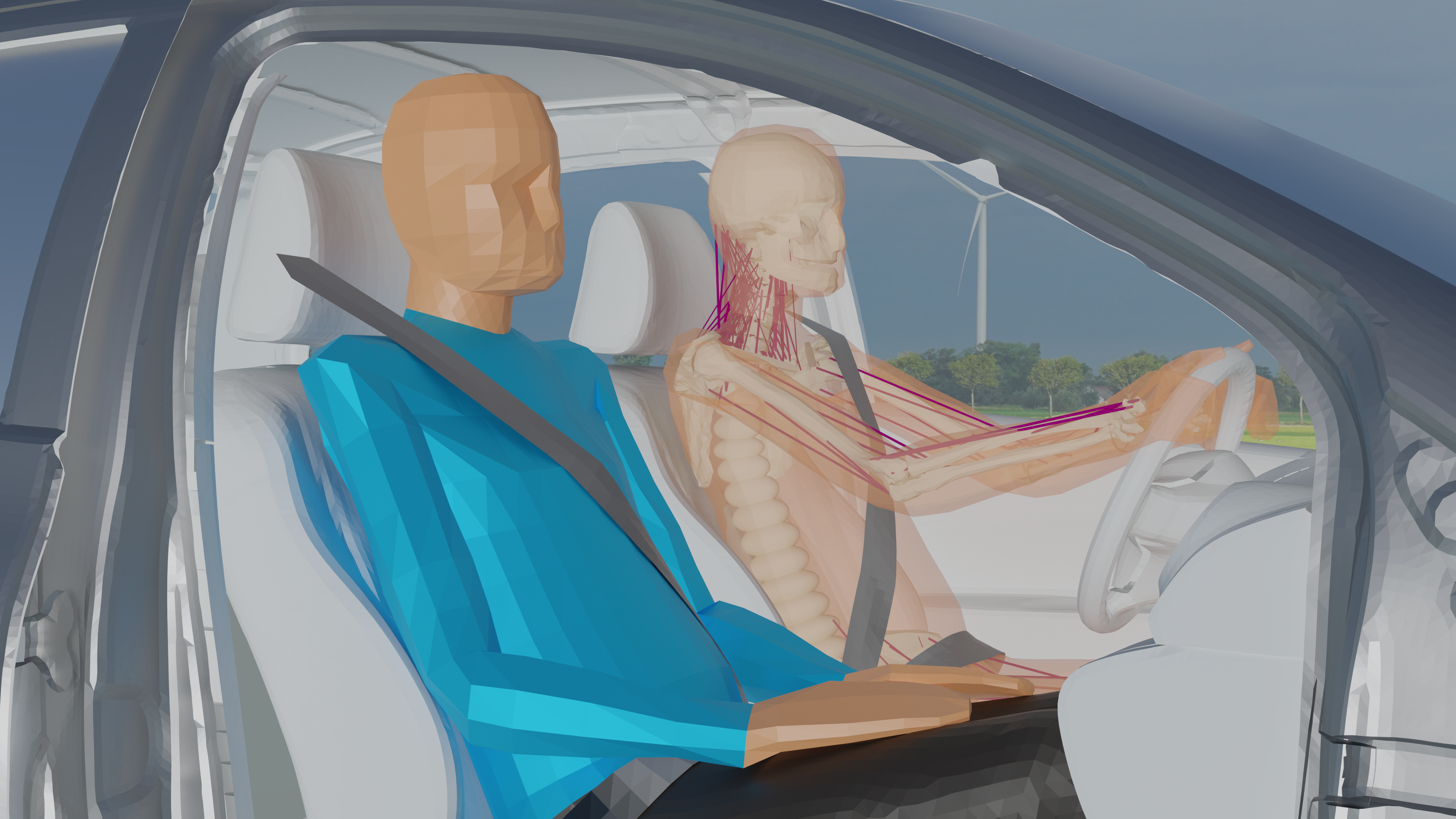 Siemens continually demonstrate the power of using digital twins. In the automotive industry, digital solutions of occupant safety systems can reduce costs, time to market and save lives. To do this a digital twin of the safety system and the occupant is required.

With Simcenter Madymo Siemens offers a solution for accurately and efficiently developing occupant safety systems. It bundles various methodologies and validated multi-body (MB) and finite element (FE) models of both humans and crash test dummies. It also includes seat belts and airbag modeling capabilities. In order to assist the safety engineer and reduce their burden, the Siemens developers have upgraded the user toolset to offer improved efficiencies during the setup of occupant safety and comfort solutions. The result of their work is the ‘Framework for Occupant Restraint Testing and Evaluation (FORTE).

The Siemens Madymo team hosted a webinar on occupant safety systems to provide you with an insight into the latest developments. If you missed this event do not fret, it is now freely available on-demand, ready for you to check out any time you like.

The evolution of complexity in occupant restraint applications

As cars develop to meet latter-day technologies and trends, their safety systems become more integrated into their design; two categories of safety systems have emerged: “passive” and “active.” These names originate from their purpose; a passive system waits (passively) for a crash to occur before it becomes effective (injury mitigation). While, an active system, actively tries to (help) prevent or mitigate the crash itself (crash mitigation).

An example of a passive system includes a seat belt pretensioner. A pretensioner is a system that quickly tightens the seat belt when a crash is imminent or at its onset. It does this to remove any slack in the belt and tries to ensure the occupant and the seat move as one.   reducing the ride-down velocity of the occupant Active and integrated systems

One active system that has become common in vehicles of today is an Automatic Emergency Braking System (AEBS). It detects dangers far ahead of the car, so the car can avoid a collision and brake safely. If emergency braking is likely to cause a hazardous situation, then the vehicle’s speed can be reduced before a crash occurs. While active and passive safety systems work well independently, a unified system that integrates both has the potential to do much more. It is this that is known as an Integrated Safety System.

To pass performance requirements in current automotive safety test protocols, safety systems are still required to pass passive and active tests separately. However, Integrated Safety is becoming more commonly discussed in new regulations that show more encompassing systems are desired. One such requirement is outlined for 2022, by the EU in their General Safety Regulation. This requires Lane Departure Warnings, Driver Drowsiness Recognition, and Advanced Emergency Braking Systems, to be available in future cars.

What are the advantages of integrating passive and active occupant safety systems?

An example of an Integrated Safety system

An Integrated Safety system allows the active and passive systems to work together. For example, avoidance maneuvers (active safety) are designed to avoid accidents and save lives. However, the fast motions can increase the risk of occupants being in a less favorable position prior to an unavoidable crash, thus reducing the performance of the airbags (passive systems). It is, therefore, important to check the robustness of current safety systems outside the defined laboratory conditions so that the timing and use of both active and passive safety systems can be optimized as an integrated system to save lives.

A challenge for manufacturers

To the vehicle driver and occupants, this means a safer car but to the car manufacturer and their suppliers, this creates new considerable safety design challenges. What was once relatively simple and independently acting safety systems, are now becoming integral pieces of one larger and more complex safety system. Wherein, the unpredictable nature of human behavior and the complex traffic environment the system must work in further add to the difficulty in creating such systems. A proven way to develop integrated safety systems is with multiple iterations of extensive virtual testing. This is because, there are a vast number of scenarios and permutations that Integrated safety systems need to work in, and a considerable number of variables that change the outcome.

The challenges of virtual testing

Setting up virtual tests to simulate Integrated Safety Scenarios is no simple task. The learning curve to master complex software packages capable of modeling such systems is steep. Additionally, with so many parts and variables included in an Integrated Safety system, it takes an experienced engineer a long time to set up a simulation with confidence.  There is, therefore, a need to reduce the complexity, the risk of error, and make more efficient use of the engineer’s valuable time.

Existing seating configurations have been optimized over many years to increase their safety. However, the newly proposed seating positions for autonomous vehicles complicate existing safety systems. Any change in seating position results in a change in the loading on the occupant. As a result, many manufacturers are investing in the R&D required to bring these new positions up to the safety standards of the more traditional seating configurations.

The new designs may require hundreds of thousands of simulations, so they are able to perform effectively in all challenging real-world scenarios. These simulations are executed in a virtual environment to save time and cost compared to traditional crash tests. The test analyzes and optimizes the effect of alternative occupant seating positions in a variety of crash scenarios. In each test, they assess the risks posed to the occupant allowing the engineers to fine-tune their design at the concept stage. These simulations reduce time-to-market and cut costs by taking place during the early development stage, rather than final testing, and not requiring full-scale prototype cars.

Siemens finally balances detail and accuracy by combining multi-body and finite element modeling. Allowing, its software to be unrivaled with regards to setup and simulation time. The Siemens team has taken on board the feedback from the world’s leading safety and design engineers. They have highlighted the need to reduce the complexity and time required to set up Integrated Safety simulations. With this, Siemens has engineered new ways in which the same impressive results can be achieved more quickly and easily. The solution is FORTE.

Engineers have stated that the huge number of variables in simulations makes many common simulations overly complicated to set up. To reduce this burden, FORTE has been designed around a “modular” concept. This concept consists of one master model. It is the base of the entire crash simulation and is comprised of many interchangeable modules. Each individual module has its own file which can be easily modified, removed, or replaced. Furthermore, FORTE provides alternative modules that are user selectable. The modules provide the most common crash scenarios with the most common values pre-set by default. The application can be personalized with its easily manipulatable parameterized elements. The Elements allow you to further adjust the aspects that are commonly changed between tests such as the belt time-to-fire.

What are the user benefits of FORTE?

Users will find it easier and less time-consuming to set up simulation models for Integrated Safety system performance assessment.  The need to create new models has been almost eradicated. This is because of the large number of tuneable modules and parameters provided. To closely match user requirements, only slight modifications may be necessary to the supplied models.

It was usual for an engineer to develop a good understanding of every aspect of the model before they could confidently build it. During this learning process, they would have to develop their understanding of the “engineering best practices”. Now, with FORTE, users can work with a broad understanding of their area of investigation. This is coupled with the essentials of modeling techniques. This makes it much easier for less experienced engineers to produce high-quality simulations that simulate the kinematics of an occupant. With this fully functioning simulation platform, experienced users can set up models more efficiently. Novice users can produce high-quality models with less experience.

Continuous Automotive Test Innovation within Simcenter… November 26, 2021 Simcenter Madymo road scene Siemens Simcenter Madymo has been awarded the ‘Crash Test Innovation of the Year’ for 2021 by…
Autonomous vehicles enter a validated future December 14, 2020 An introduction to multibody based human body model use in autonomous vehicles research - altrnative seating position validation.
4 Myths about AI in CFD April 6, 2021 As Artificial Intelligence (AI) has become more ubiquitous in our everyday lives, so too has confusion about what it is…