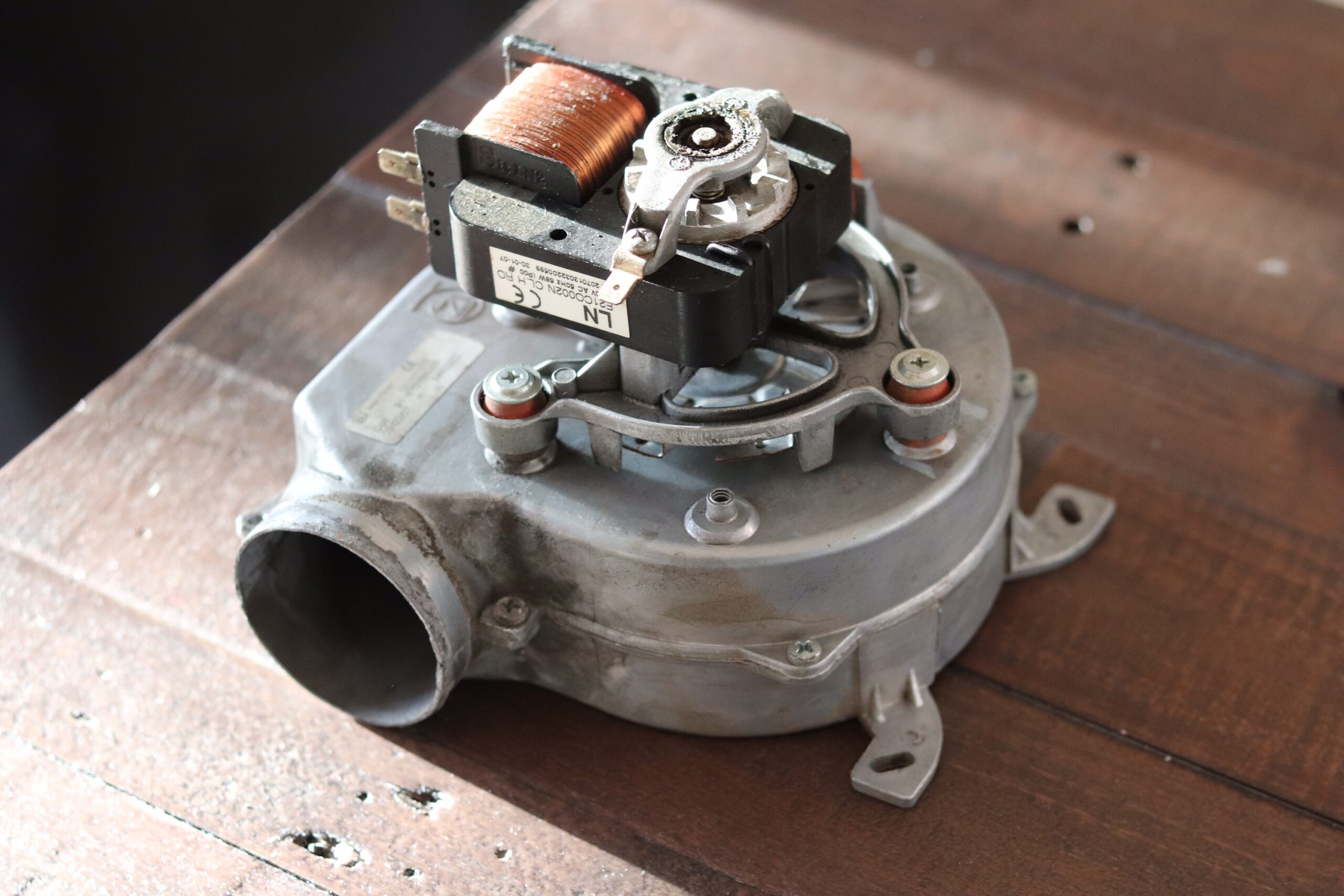 Rest in peace, you served me well.

A couple of months ago I faced a hilarious surprise: my boiler broke. It refused to fire up, no matter what. The temperature in my home plummeted down to 7 °C. I had to take part in work videoconferences wearing a scarf and hat, with the occasional colleague (rightly) making fun of the situation. My numb fingers produced a spectacular number of typos-per-sentence. And, on top of all of this, the gym and the office (for a hot shower) were inaccessible due to the national lockdown. A disaster!

This “tragicomic” experience was eventually ended by my plumber Jorden finding the culprit: the boiler fan (picture above). If you read my previous blog you will know that I tend to see the world a bit through the eyes of Simcenter STAR-CCM+. So when Jorden grievously passed me the dead body of the fan, all I could see was literally the following:

From the autopsy I could tell that this fan was a single-phase electric motor, technically a so-called shaded-pole motor. A simple, clever (and 133-years-old) idea still used today. To have an idea of its working principles, take a look at this video.

Have fun with the fan

I bet that one of the first foundation tutorials you ever had with Simcenter STAR-CCM+ was the setup of the CFD of a blower fan (refresh your memory here). However what if you were interested in also adding the electric motor to the computational fluid dynamics (CFD) simulation and the mechanical part?

The endeavor to electrify the world is quite challenging, we know. Let me show you how we can support you by sharing that burden. With Simcenter STAR-CCM+ 2021.1, we have introduced a graphical electric circuit editor and we have improved the Finite Element (FE) excitation coil model. The digital twin of the electric car you are working on will benefit from those new features. You will spend less time setting up your simulation, the coil currents of your e-machine will gain robustness and realism. You will be able to model any 3D shape of your coils. Last but not least, you may be able to drastically reduce your simulation turn-around time.

And maybe you will be able to improve the durability of your boiler (very important, believe me).

Electric circuitry with its graphical incarnation is an old art. Its foundation theorems date back to more than a century ago thanks to pioneers like Ohm, Helmholtz, Kirchhoff, Norton, Thevenin and Meyer (who was, by the way, a Siemens researcher and the anonymous protagonist of a mind-blowing episode of World War II). Well, we didn’t want to miss the opportunity of empowering our users with this well-established technique. A new electric circuit editor allows you to graphically set up, interpret, inspect or modify your electric circuits.

Gone are the days when you had to set up your electric circuit from within the simulation tree. From now on you will create your circuits in a circuit editor with fewer clicks. The setup will be less error-prone. You will be able to finally focus on the important details of your simulation.

All you need to do now is to place the circuit element symbols on the canvas and connect the desired terminals. Maybe play with the layout a little bit. And don’t forget to place a ground (safety first!)

Are you analyzing and simulating a novel wheel hub motor? Let me guess, it’s an axial flux machine, one of those that are very short and compact, with great torque density and high power density. And tell me, I suppose you need to model the typical axial flux machine’s closed coils.

Or maybe you ‘just’ needed a simple way to model stranded coils with any 3D shape in presence of ferromagnetic materials and you can’t do it with a Finite Volume approach. Yeah, I know, I can feel your pain, but now keep reading!

The new FE excitation coil model in Simcenter STAR-CCM+ 2020.3 allows you to model stranded coils by using FE methods. As you know, you need FE methods for cases with sharp spatial discontinuities of the magnetic permeability. Ferromagnetic materials typically introduce those permeability jumps, for instance in the case of the iron core of the fan motor (or practically any electric motor). Notably, the FE excitation coil model populates the coil region with the right electric current density, which will be by design divergence-free (so you don’t need to take care of that, the code does it for you in a robust way).

The boundary method is a robust topology-based method where you input the current as a boundary condition at the coil inlet. It is easy to set up and easy to template and automate, so you can explore your parameter space faster. However the boundary method is less general than the new vector method.

The image above shows a typical pancake-like shape of an axial flux motor. In such a device, the magnetic field in the stator-rotor gap is aligned with the rotational axis. Coils are closed, uninterrupted loops, so requiring the vector method for a proper setup. Axial flux machines have a short axial length, an advantage in some applications, such as wheel hub motors.

The vector method is a graphical method where you specify the current by simply placing a point and an arrow in your Scene, namely by creating a Plane Section crossing your coil. This will greatly simplify the setup of your electric machines. Moreover, contrary to the boundary method, the vector method allows you to model closed loop coils, as the ones in axial flux motors (see picture above), or in transformers, or in my boiler fan. This kind of coils, being uninterrupted loops, do not offer inlet/outlet boundaries for the coil current specification, however the new vector method would successfully impose the current. Finally, you can use the vector method even when you have periodic interfaces, so you may enjoy a significant decrease of the number of degrees of freedom if your geometry is prone to symmetry reduction.

The animation above shows the magnetic flux density of my boiler fan motor computed in Simcenter STAR-CCM+ 2021.1. The short-circuited shading coils retard the magnetic flux variations in the shaded portions of the core, producing a slight imbalance between the two oppositely rotating stator magnetic fields. Result: a net rotation, which can move a rotor.

We tested our brand new features on the Nissan Leaf e-motor geometry:

A word of wisdom

They say you appreciate things only when you don’t have them anymore. After that mystic experience of living without heating in the British winter I became way wiser and even more grateful for the invention of boilers, fans and electric motors. Don’t you make my same mistake: start appreciating our new capabilities in Simcenter STAR-CCM+ right away from their introduction. And get a great plumber.

4 Myths about AI in CFD April 6, 2021 As Artificial Intelligence (AI) has become more ubiquitous in our everyday lives, so too has confusion about what it is…
Is e-bike noise an issue? Quit whining! June 2, 2021 E-bikes become quite popular these days. Besides the operating range, also the generated noise is an important quality aspect for…
If you can’t take the heat… Simulate it! Reducing VTM costs… June 10, 2021 Find out how to efficiently and accurately simulate VTM using Simcenter Engineering's multi-fidelity workflows.
This article first appeared on the Siemens Digital Industries Software blog at https://blogs.sw.siemens.com/simcenter/the-electric-circuit-editor-an-ancient-art-now-in-simcenter-star-ccm/