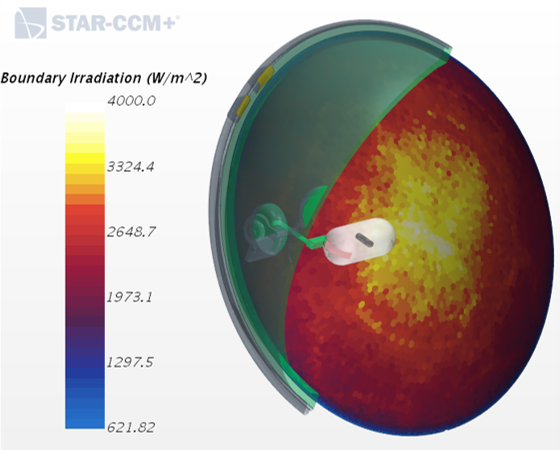 My youngest is 6 years old; a little boy of the new millennium. He is not interested in fairy tales. What he finds fascinating is physics. Especially particle physics, although I don’t think he really knows the difference. He is obsessed with the Large Hadron Collider in the CERN and watches TED talks with Brian Cox. There is one in particular, that speaks about what went wrong in the LHC; that is his favourite. I think it’s because at the end, Brian Cox says that they are trying to discover the building blocks of the universe by making small particles collide with the speed of light. So, when Leon looks at a rainbow, he doesn’t imagine pots of gold at the end of it, but more likely, particles colliding and revealing the building blocks of the universe.

Particle tracking (in light terms referred to as ray tracing) is in all fairness, a really good way of simulating light and its thermal effects. The light disperses, reflects and refracts and causes thermal effects to the object it comes in contact with. Refraction is a very important property of light and is also responsible for some natural optical phenomena, including rainbows. So, if there is a pot of gold at the end of the rainbow it certainly is a hot one!

In Simcenter STAR-CCM+ 2019.3 we are releasing a new stochastic radiation thermal energy (RTE) solver based on the Surface Photon Monte Carlo (PMC) ray tracing method with refraction modelling. PMC is arguably the most accurate method for RTE. Thus, the new (PMC) solver is highly accurate and very efficient, and models the effects of refraction and reflection, making it well suited for headlamp applications. Comparisons with the Discrete Ordinate Model (DOM), which is the only other radiation model to model refraction​, show that the new PMC model is more efficient and more accurate in predicting refraction than DOM (check the comparison images).

Refraction is the change in direction of light passing from one medium to another or from a gradual change in the medium. In the case of headlamps this can be the plastic of the head lamp or even the air inside it. Refraction is important when we look at thermal safety. In order to be able to predict where the light will create a hotspot, we need to know how it refracted. This way we can account for the right thermal load from the LEDs or the sun. As the headlamps have multiple radiation emitting material as well as the external plastic, the light is refracted and creates hotspots in certain areas and the heat can damage the headlamp. Why is it important? Let me give you a couple of examples:

Example 1: The bulb is a hot spot on the cover lens, caused by the optical lens, e.g. with a Xenon lamp. This hot spot is typically hotter if refraction exists (real world or modeled) and therefore important for those types of systems.

Example 2: Solar light (irradiation) is bundled by an optical lens (e.g. Xenon lamp, LED light) and has the focal point close to a surface which can create damage. With the new surface PMC model, we can predict accurately these hotspots and modify the design by including heat shields in the right places leading to better and more durable designs.

Headlamps are very expensive and very delicate. The new designs are also transparent, making aesthetics quite an important aspect. For headlamp manufactures to maintain aesthetics, while being confident about the durability, they need to accurately predict those hotspots.

The application we are looking at today is headlamp lighting but more applications like medical (Xrays, MRI scans and radiotherapy), semiconductor manufacturing and defense need accurate modelling of radiation properties making the PMC very attractive.

Going back to my little scientist and the reality of rainbows and refraction. It’s so lovely seeing his enthusiasm! The other day he told me “When I grow up, I will be a principal physicist in the CERN”. I, of course, said “This is lovely darling! Do you want to be the next Brian Cox?” His answer brought me tears of laughter and reminded me that he is still just a little boy. He said, “No mummy, I rather keep my own name”!!!

“For the little scientists of the future”

An ode to the last days of summer...with Cox Marine,… September 16, 2021 Before we start talking about Cox Marine, digitalization and the CXO300, let’s take a moment for an ode to the…
4 Myths about AI in CFD April 6, 2021 As Artificial Intelligence (AI) has become more ubiquitous in our everyday lives, so too has confusion about what it is…
Surfboard CFD - Riding the Digital Wave July 29, 2022 The flip-flop engineering symposium Monday, December 9, 2019, 7 pm. Sunset Beach Elementary School Cafeteria, Oahu's North Shore, Hawaii. Two…

One thought about “Is there a pot of gold at the end of the rainbow? A true story about radiation and refraction”

This article first appeared on the Siemens Digital Industries Software blog at https://blogs.sw.siemens.com/simcenter/is-there-a-pot-of-gold-at-the-end-of-the-rainbow-a-true-story-about-radiation-and-refraction/