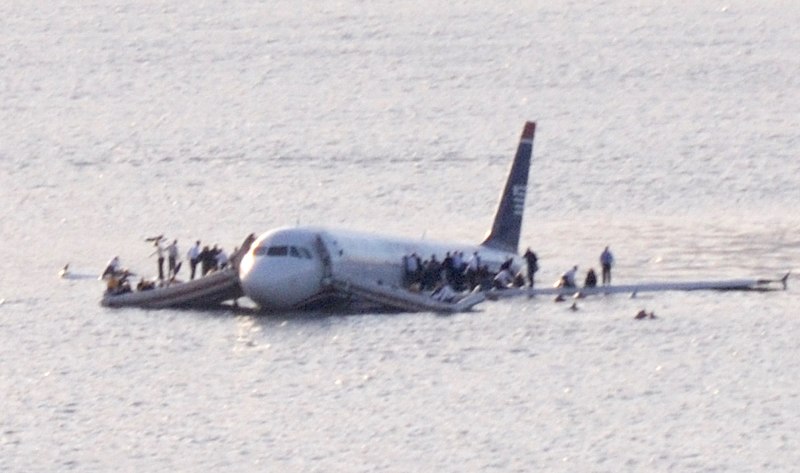 On the 15th of January 2009, an Airbus A320 departing La Guardia at New York, struck a flock of geese on initial climb-out. After suffering an immediate loss of thrust in both engines (NTSB report [1]), the commander decided there was no possibility of safely reaching any alternative runway and that he had no option other than to ditch in the Hudson River. Capt. Sullenberger performed one of the most spectacular ditching in aviation history.

All people aboard the aircraft survived thanks to the pilot reaction and to aircraft water landing certifications. Aircraft are designed in compliance with certification FAA/CS 25.801 [2], which requires that “under reasonably probable water conditions, the flotation time and trim of the airplane will allow the occupants to leave the airplane. […] If compliance with this provision is shown by buoyancy and trim computations, appropriate allowances must be made for probable structural damage and leakage”.

First, we will see what the ditching process is. Then, we will see how to assess the floatation phase with Simcenter Amesim. Finally, the simulation outcomes will be presented.

Assess the floatation phase thanks to Simcenter Amesim

The aircraft is divided into several volumes: for each of them, the hydrostatic force (known as the buoyancy force) and the weight are considered. Water and air can enter or leave the volume if the orifice connected to the volume is opened. Also, the model takes into account the overall hydrodynamic forces acting on the aircraft. Here is the corresponding Simcenter Amesim model:

One can extract the geometrical inputs from an aircraft CAD via the CAD import feature in Simcenter Amesim. The resulting output tables are used to assess the immersed volume concerning the aircraft’s altitude and orientation. With the immersed volume being known, the hydrostatic force can be computed.

One key element to increase the floatation time is to slow the flooding. Some aircraft have a “Ditching Push Button” which closes all open-air inlets, valves, and other openings on the underside of the aircraft. The impact of this switch can be assessed by changing the orifices area used to simulate aircraft flooding.

On the other hand, reduce the aircraft weight is another way to increase the floatation duration. This will have two benefits: reducing the approach speed and increasing buoyancy by creating a larger air mass held within the fuel tanks. Furthermore, using this model can evaluate the impact of the volume of fuel remaining in the tanks on the floatation duration.

The next figure presents the animation of the overall aircraft position and orientation on the left side. Via this animation, one can identify the immersed areas. On the right side, one can easily see the water intrusion for each section of the aircraft. This is helpful to determine the positions of trapped air volumes, which limit water intrusion.

Assess aircraft floatation time is not the only interesting outcome of the simulation. The aircraft’s orientation has a major impact on safety. A greater inclination makes the passengers and crew evacuation more difficult. Hence, monitoring the aircraft’s inclination is essential. Below is the plot showing the aircraft pitch angle evolution for the tome.

Thanks to this high-fidelity model, one can use this innovative simulation method supporting aircraft ditching certification. This could lead to better, faster, and more efficient certifications. Consequently, it helps the industry to reduce costs and time to market.