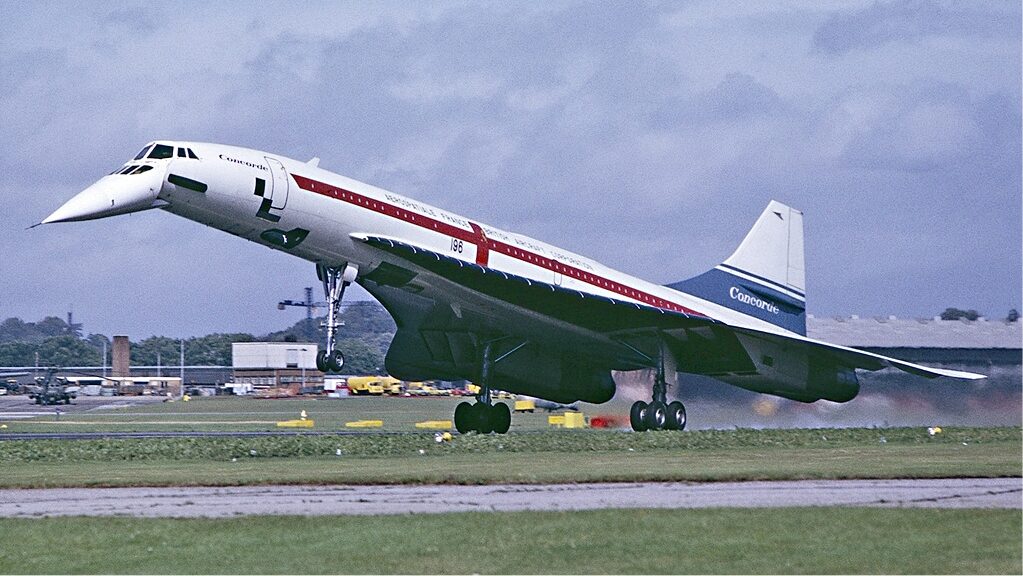 Growing up in West London during the 80s and 90s, I would often hear the deep rumble of Concorde from the school playground as it took off almost 10 miles away at Heathrow airport. Even on the tarmac, it was quite an ordinary sight, despite its rather unique looks. Probably just because it was always there, the idea of supersonic flight never struck me as all that impressive.

Now that I better appreciate some of the challenges you face when trying to overtake sound waves in an aircraft, it seems strange to have accepted these machines as the norm – and it was only after they were retired from service in 2003 that I began to appreciate how remarkable the story of the Concorde was. Designing a completely novel and pioneering aircraft as a collaboration between two countries and using the design and testing tools available at the time really is an astonishing feat of engineering and determination.

One of the most striking facts I have read about Concorde was the number of full-size prototype airframes built during its development – six. This might not sound too shocking compared to Edison’s 10,000 lightbulb prototypes or Sir James Dyson’s 5,127 iterations to perfect the first bagless vacuum cleaner. However, consider that only 14 production Concordes were ever built. This is a big part of why the development costs became impossible to recoup from aircraft sales, and the whole project was only possible thanks to a massive financial commitment from the French and British governments.

From six to hundreds with virtual prototyping

Now that we are well into the 21st century, I can’t help but wonder how the story might have been different with the CAE and collaboration tools we have available today. Using simulation in place of physical testing and prototyping, developing a pioneering and yet commercially viable new technology with confidence is much more achievable than ever before, despite the increased complexity of today’s products and the rapid pace of development needed to remain competitive. Simulation not only answers questions but also opens the door to new ideas and is a catalyst for innovation. Here are three examples of how Siemens customers use simulation to push the envelope and develop pioneering products.

Designing and testing flying sailing boats without getting wet

Teams participating in the 36th America’s Cup were only allowed to build a single full-scale physical prototype before building their 75-foot flying mono-hull race boats[GS(SSC1]. This meant exploring as many design concepts as possible before building – something that was only possible using simulation-based virtual prototyping. INEOS TEAM UK tackled the mind-boggling task of exploring 1000s of combinations of hulls, foils sails, and controls for both floating and flying using CFD simulation with Simcenter STAR-CCM+.

As no-one had ever seen or sailed these boats before, not only did the engineers design and test the boats using CAE and simulation tools, the sailors also leveraged the same technology. A motion platform simulator fed by data from CFD simulation enabled the sailors to test different designs on a virtual racecourse, learning how to sail these revolutionary new boats and completing the crucial feedback loop to the design team.

“Our competitiveness comes down to the accuracy with which we model, the designs ideas we can push into that and the speed with which we can test and iterate”

One of the biggest challenges in switching to renewable energy sources is a lack of large-scale energy storage. During the unavoidable periods when wind and solar are unavailable, or to meet peaks in demand, the task of producing energy typically falls to gas turbines powered by natural gas.

When it comes to operating an autonomous aircraft that can take off and land vertically in a tail-sitting orientation, hover, and transition to horizontal flight with a useful range and payload, there are many different demands put on the propulsion system.

The V-BAT drone uses a ducted fan which improves the efficiency and robustness of a propeller while also reducing noise – ideal for a surveillance drone with military applications. However, making the concept work requires designing a single duct to perform well across the entire flight envelope. Martin UAV tackled this challenge by uncompromised virtual prototyping: leveraging intelligent design exploration using Simcenter STAR-CCM+ and HEEDS they evaluated 100s of designs at various operating conditions to find a more efficient duct design that improved the drone’s payload and range.

“Our customers want more payload, more fuel carrying capacity and longer flight time. High-fidelity simulation is a way to stay ahead of their demands”

Today, it’s hard to imagine developing a ground-breaking product without using engineering simulation to prove and refine designs before embarking on the long and costly process of building physical prototypes. As well as allowing you to go faster and explore more possibilities, simulation can provide a much greater understanding of the performance of complex products over a wider range of operating conditions.

A second chance with virtual prototyping?

As for Concorde, it looks as though we will get to find out the answer – can modern CAE tools take the future of air travel beyond the sound barrier once again? Several companies are actively developing supersonic aircraft, with one operator recently announcing plans to begin operating by 2029, nearly 30 years after Concorde’s final landing. I will be watching with interest!

Meanwhile, we are eager to see and honor your groundbreaking innovation:

I feel the need… the need for hypersonic speed! September 21, 2022 Where exactly does hypersonic fit into the flow regime of speeds and what’s so special about it with regards to…
10 insights from rocket CFD for a mind-blowing moonshot July 29, 2021 This is your guide to a successful moonshot project - with 10 insights that only rocket CFD (Computational Fluid Dynamics)…
4 Myths about AI in CFD April 6, 2021 As Artificial Intelligence (AI) has become more ubiquitous in our everyday lives, so too has confusion about what it is…
This article first appeared on the Siemens Digital Industries Software blog at https://blogs.sw.siemens.com/simcenter/how-to-design-a-product-that-will-change-the-world/