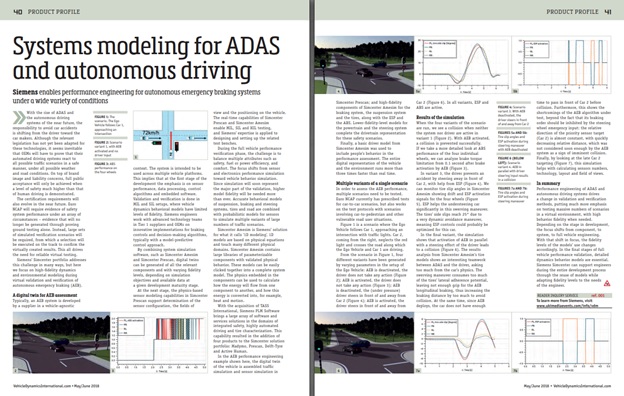 A majority of accidents are caused by late braking or braking with insufficient force. The driver might be distracted, the visibility poor, or another road user makes an unpredictable move. Year over year, the number of car casualties decreases. Yet any victim is one too many.

A giant step forward is taken with autonomous emergency braking (AEB) systems. AEB Systems help the driver to avoid accidents or, at least, to reduce their severity. The Insurance Institute for Highway Safety says automatic braking can reduce rear-end crashes by 40 percent. So, what are we waiting for? Bring it on!

Most (luxury) vehicle brands already include AEB systems in their package offering. Although it is common sense that drivers consent to save lives by opting for the autonomous emergency braking system, it can make the driver feel uneasy to let the vehicle take over control of the vehicle.

“Manufacturers, there is still some work to be done.”

While previously, most research was focused on developing the sensors and electronics in the first stages of the design cycle. Nowadays, the center of attention is shifting towards full vehicle behavioral simulation. This is crucial to improve vehicle dynamics performance and balance with multiple performance attributes such as safety, fuel efficiency and comfort. Typically, this is done during the performance verification and validation phase.

At Siemens PLM Software, we are on it. Simcenter Engineering experts combine system simulation software to generate digital twins of all the relevant components and with varying fidelity levels, depending on simulation objectives and available data at a given development maturity stage. Accurate behavioral models of suspension, braking and steering systems, tires and road are combined with probabilistic or physics-based models for sensors to simulate multiple variants of large numbers of traffic scenarios.

The Simcenter solution portfolio addresses this challenge along several lines. In this issue of the Vehicle Dynamics Magazine, we have focused on the importance of high fidelity driving dynamics and environmental modelling during virtual validation and verification of autonomous emergency braking (AEB) systems. Test massive numbers of scenarios in a virtual environment

As you can read in the magazine, the Siemens Simcenter portfolio can support engineering departments during the entire development process through the reuse of models while adapting fidelity levels to the needs of the engineer.

If you can’t take the heat… Simulate it! Reducing VTM costs… June 10, 2021 Find out how to efficiently and accurately simulate VTM using Simcenter Engineering's multi-fidelity workflows.
Most asked questions on data collection for ADAS validation August 26, 2021 About 1.25 million people globally die each year due to road traffic crashes - that’s over 3400 deaths a day!…
Using simulation data to accelerate autonomous driving… November 23, 2021 Using simulation data to accelerate autonomous driving development A changing landscape For some years now, the automotive industry has been…
This article first appeared on the Siemens Digital Industries Software blog at https://blogs.sw.siemens.com/simcenter/give-me-a-brake-virtually-test-autonomous-emergency-braking-systems/