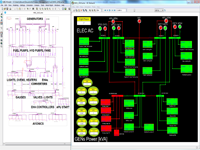 To meet stringent certification rules, the aerospace industry must reduce fuel consumption and maintenance costs. In this context, a new trend has appeared: engineers are working on the replacement of conventional hydraulic, pneumatic and mechanical systems with electrical ones.

As a consequence, electrical power requirement has increased considerably.

To address the increased need for electrical power, model-based systems engineering approach based on Simcenter Amesim enables engineers to design the electrical network of any aircraft. With Simcenter Amesim, not only can you analyze the electrical systems and their components in complex networks but you can also account for thermal integration within the complete aircraft from the very beginning of the design process