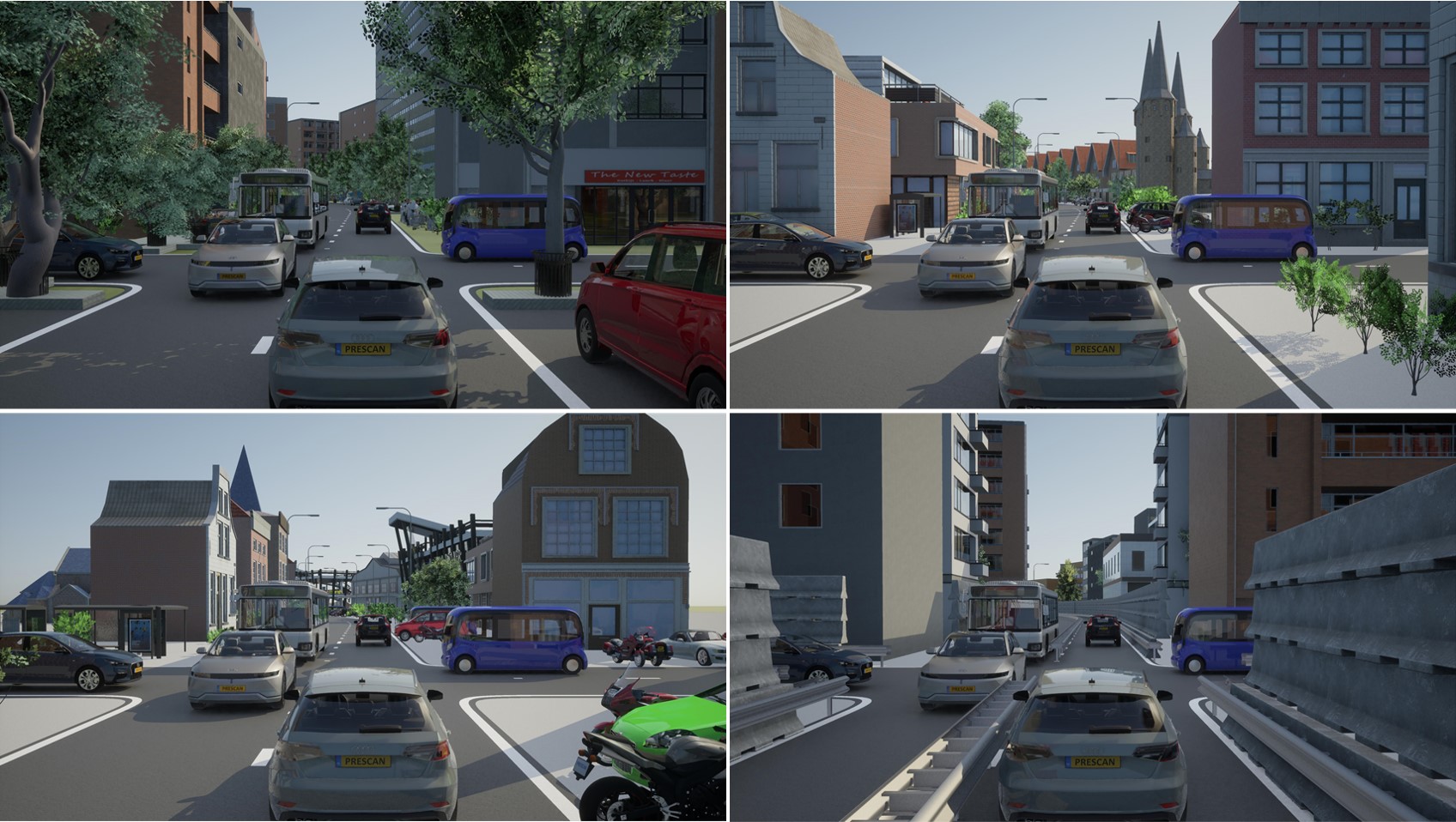 Standardization and interoperability is a must. Co-simulation or connecting your AV stack to Simcenter Prescan has never been so easy as now, with this release you can create compliant OpenDRIVE files with Simcenter Prescan. This release also introduces catalogs for openScenario files, and external controller. These additional features bring the OpenX standard support in Simcenter Prescan to a very mature level. Users are able to import and use a large variety of openDrive and openScenario files within their virtual validation setups.

Simcenter Prescan 2022.1 brings exciting updates to the Physics based Lidar sensor. Prescan models the energy returned to the Lidar due to color variations in the targets thus accurately modeling the affects on the performance of perception algorithms. Furthermore, point cloud outputs of the Physics-based Lidar can now be visualized as an annotation on the viewer screen.

When you are working on topics like ITS-G5 encoding, geo-networking and 802.11p message scheduling development look no further. Today you can define  your own binary messages like ASN.1 messages within Prescan. Your V2X HiL can be easily connected through C++ or Matlab Simulink.

Physics based simulation at scale

With this new release, the Point-cloud Lidar (Physics-based Lidar) is supported in Azure cloud as a beta. Prescan users are now able to perform high fidelity simulation at scale, using the same solution and cluster / cloud environment. Customers may also benefit from faster cloud deployments and documented guidance for analysis and digestion of large results sets using unsupervised learning with this release.
Interested customers can request to evaluate it!

Simcenter Prescan has an extensive library of assets which is regularly updated based on customer requests. The Hyundai IONIQ and Hino Blue Ribbon bus have been added to the Simcenter Prescan vehicle library. Several new building models have been added to enrich the city modeling experience. Furthermore, infrastructure objects (e.g., cement guardrail, sound absorbing wall, fence etc.,) have been included to provide additional variation for performance and accuracy testing of sensor perception systems.

EuroNCAP protocols provide an important benchmark for the testing and validation of ADAS systems. Simcenter Prescan 2022.1 includes the ENCAP Automated Emergency Braking (AEB) scenario suite with automated reporting to enable our customers to validate their ADAS systems against the ENCAP protocol scenarios. The scenarios are available in Matlab, as well as Python. The test suite also includes an example safety assist system designed to avoid a crash in the longitudinal direction. The demo suit is available at the Support Center.

The strategies for the validation and verification of automated vehicles are further developed in the on-demand webinar on highly automated driving systems validation.

Xcelerator Share is now available together with Prescan and enables innovative product design and manufacturing via robust digital threads that ensures data is accessible when and where it is needed.

4 Myths about AI in CFD April 6, 2021 As Artificial Intelligence (AI) has become more ubiquitous in our everyday lives, so too has confusion about what it is…
Most asked questions on data collection for ADAS validation August 26, 2021 About 1.25 million people globally die each year due to road traffic crashes - that’s over 3400 deaths a day!…
Simcenter™ FLOEFD™ 2021.1: What’s New? April 29, 2021 What's New in the latest Simcenter FLOEFD 2021.1 version? Electromagnetics, structural simulation and much more. Find out for yourself.

This article first appeared on the Siemens Digital Industries Software blog at https://blogs.sw.siemens.com/simcenter/autonomous-vehicle-development-at-scale/