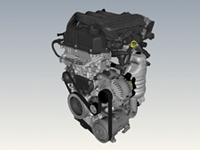 A lot has changed since André Citroën and Armand Peugeot started making cars in 1919 and 1889 respectively. The car was still a concept when Armand Peugeot made four (!!!!) three-wheeled, steam-powered cars in 1889. Nice idea, but the trike-car was not a huge success. Steam wasn’t the right direction and the next Peugeots were four-wheeled cars with a petrol-fuelled internal combustion engines. Most notably, these Peugeots built in the 1890s were much more sophisticated with rubber tires, three-point suspensions and sliding-gear transmissions.

Both guys seem to have been turn-of-the-century petrol heads. While Armand Peugeot leaned towards racing — a 3-horsepower Peugeot even won the world’s first motor race, the Paris-Rouen Competition for Horseless Carriages sponsored by Le Petit Journal in 1894, André Citroën followed the footsteps of Henry Ford. He introduced the first mass vehicle production line outside the United States. Not only were the early Citroëns numerous and priced to sell, André Citroën liked the marketing side of things, opening a showroom on the Champs-Élysées in Paris, using the Eiffel Tower for giant-sized advertising, and creating a sales and support concept similar to what we call dealerships today. A hundred years later, this is all pretty crazy to think about. Modern cars are rolling computers with software running practically every system from the engine to the safety features to the climate control. And all these systems are becoming increasingly complex, and include a growing number of actuators, sensors, hybrid traction systems, and electric and electronic components, requiring controls and protection strategies to limit component damage without forgetting fuel efficiency and low emissions. How to engineer all this is an entirely different issue than what André and Armand had to deal with a century ago.

4 Myths about AI in CFD April 6, 2021 As Artificial Intelligence (AI) has become more ubiquitous in our everyday lives, so too has confusion about what it is…
Surfboard CFD - Riding the Digital Wave July 29, 2022 The flip-flop engineering symposium Monday, December 9, 2019, 7 pm. Sunset Beach Elementary School Cafeteria, Oahu's North Shore, Hawaii. Two…
Model-based design from ICEs to ICUs: Bridging the… November 10, 2021 The events of the past few years have turned global attention towards health and, more specifically, healthcare. From the images…
This article first appeared on the Siemens Digital Industries Software blog at https://blogs.sw.siemens.com/simcenter/andre-and-armand-would-have-liked-simcenter-system-simulation-solutions/