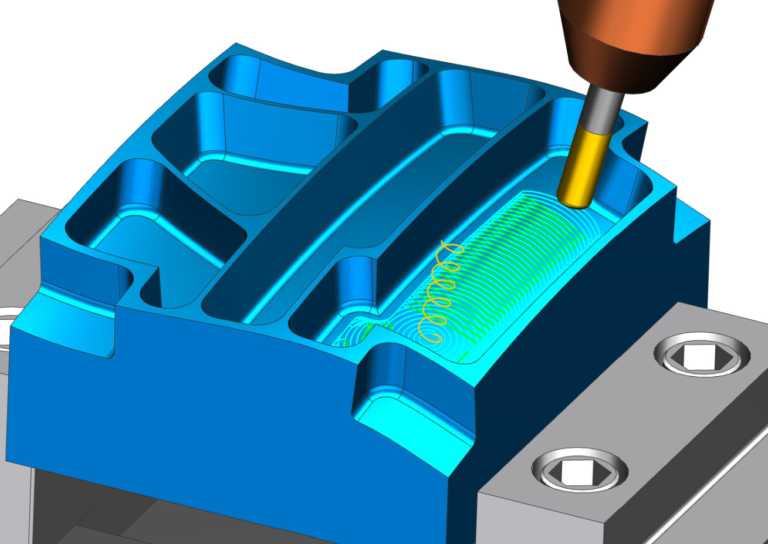 In this article, “Two Roads to Toolpath Evolution,” from the January 2020 issue of Manufacturing Engineering, you will learn how dynamic machining (known at Siemens as adaptive milling), produces a radically different cutting path compared to traditional machining.  The traditional toolpath follows the desired profile at a predetermined offset and works its way down into the material in an orderly fashion. It is most effective when allowed to use as much of the tool’s cutting length as possible in one continuous path.  The Contributing Editor, Ed Sinkora, states, “And in calculating the most efficient route cutting material out of the space, Siemens’ Vynce Paradise added that the software typically produces lots of crescent shaped paths that go from one end to the other and then back again, with varying radii. The result can look chaotic compared to a simple offset approach.

Paradise added that, ‘”dynamic machining software also uses a shallower radial depth of cut while varying the stepover or the feed rate to control the engagement level in the material cutting so you can ensure consistent cutting forces are applied to the tool during machining.”

One area of distinction is taking the technique into five-axis. “Paradise said it’s a big push for Siemens. Siemens has added what it calls “guiding curves” as a different way to control toolpaths on complex shapes.  It is particularly relevant for five-axis machining where you’re trying to get a smooth path over a complex shape.  It enables us to create paths that might, for example, automatically adjust and vary the step-over between different boundaries.  You can select two edges and it will morph and create a smooth, flowing toolpath on that complex surface between the selected boundaries, almost like water flowing through a surface.”

Paradise said another area of improvement is the ability to predict and then adjust for what would otherwise be thin walls or pillars when roughing out an area using new high-speed cutting methods.  “If you don’t see the creation of a thin pillar coming, it can wrap around and break the tool as it goes around.  Or if you collapse the toolpath towards the middle and create a thin wall, that wall can tip over with the side force of the cutter and then wrap into the cutter and break it. NX automatically detects these cases and uses a helical engagement from the top down to mill the pillar out as opposed to wrapping around it with the tool,” he said.

Simplify Machining Complexity using Integrated Toolpath… August 24, 2020 This article was written by Nishant Saini at Third Wave Systems. CNC machining is a highly competitive field. Companies compete…
What's New in NX for Manufacturing (December 2021) December 10, 2021 The holiday season is upon us, and this year we’re gifting a new release of NX for Manufacturing! With the…
Increased throughput: A $7M opportunity for manufacturers September 16, 2021 An increasing number of companies see digital transformation (DX) initiatives as a way to improve manufacturing throughput. It’s important for…

This article first appeared on the Siemens Digital Industries Software blog at https://blogs.sw.siemens.com/nx-manufacturing/manufacturing-engineering-two-roads-to-toolpath-evolution/