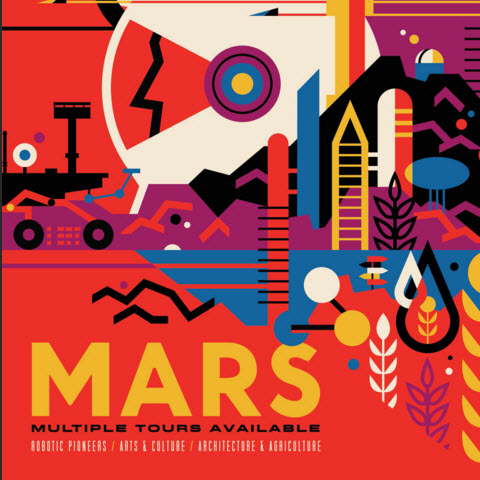 You may remember a time not so long ago when landing on the moon seemed far-fetched; a Mars mission an impossible dream. Space travel has captivated the imaginations of people worldwide long before Neil Armstrong took his one giant leap for mankind.

But far from being just the stuff of novels, television programs, or full-length feature films, space travel (and those crazy enough to believe it possible) has led to some of the greatest discoveries of our time. Think back to November when NASA discovered where Mars’ water went. Not to mention all of the cool inventions you use every day that are the result of space programs like NASA:

Now, NASA’s Jet Propulsion Laboratory (JPL) has us imagining travel to a distant planet or far-off world yet again, and this time there are freebies in it for you! Who doesn’t love a little swag? Especially when it comes from the folks in charge of one of the world’s leading space programs.

Engineers and scientists from JPL teamed up with designers to create a series of posters, which you can download for free from JPL’s website. The aptly named “Visions of the Future” advertise travel to 13 alien worlds in a style reminiscent of retro movie posters. From the icy depths of Europa, one of Jupiter’s many moons, to the scorching heat of two suns on exoplanet Kepler-16b, you can see it all.

And if you share my insatiable curiosity for such details as “What went into these designs?” then you are in luck my friend. The man and artist behind Jupiter’s poster shared the process on his blog. Stefan Bucher, who goes by the name 344, experimented with a variety of font styles including a 60s inspired vibe before ultimately settling on a design “reminiscent of early London Underground lithographs,” he writes.

It’s cool to see a glimpse “behind the curtain” into the though process behind such creative and inspiring pieces such as this.

You may wonder how this ties into CAD, aside from the design aspect of course. JPL has a longstanding history with Siemens PLM Software, particularly when it comes to using NX for design and verification of its spacecraft. NX was used in the creation of the Mars rovers Curiosity and more recently MAVEN, for example. I’m sure that when the day comes when travel to the 13 worlds depicted in Visions of the Future is a reality, CAD will have played a major role in getting us there.

See all of the Visions of the Future posters and download them for free on JPL’s website.

This article first appeared on the Siemens Digital Industries Software blog at https://blogs.sw.siemens.com/nx-design/explore-alien-worlds-with-free-posters-from-nasa-jpl/