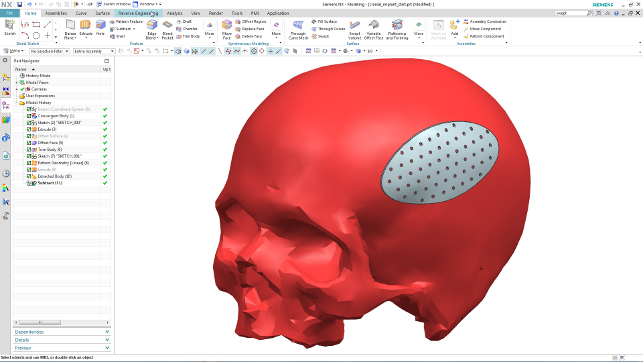 Convergent Modeling introduces an entirely new method to product design that many are calling a game changer, and for good reason. The first technology of its kind, Convergent Modeling allows designers to combine facets, surfaces, and solids in one model without converting data.Not only that, but you can import scanned 3D data as facets. Convergent Modeling is only available in NX 11.

This technology has the potential to drastically change people’s lives for the better, and we’re not just talking about the engineers and designers who use the software. (Though, let’s be honest, who wouldn’t love to eliminate an entire step from the reverse engineering process?) Consider for a moment all of those industries that rely on reverse engineering to develop their products: medical, consumer & retail, industrial… Wherever there are products that are handheld, worn, or otherwise “fit” to a person or object, you will find reverse engineering is used. Take the knee cutting block shown above, for example. There are other times when reverse engineering would be used, too, such as when CAD data for a model is lost or a prototype is altered during physical trial.

Changing the way in which those products are developed opens the door to greater innovation and creativity in design. Advancements in technology are making amazing things possible that we previously only ever dreamed of. This is true not just for those who work in product development, but any industry. And the effects are far-reaching to anyone who uses the products—be it an implant, prosthetic, or even a computer mouse. Let’s look at a few specific examples. If you haven’t stopped to take note of what’s going on in the medical industry lately, chances are you’ve missed some things. Technology such as 3D scanning and printing are used more frequently now than they were a year ago. A nine-month-old baby’s life was saved earlier this year when a doctor used a 3D printed model of a human heart to assist in pre-planning the complex surgery, a practice that is becoming more commonplace. Celprogen, a biotechnology company focused on regenerative medicine, announced yesterday that they created 3D printed hearts using PLA scaffolds filled with adult human cardiac stem cells. Think of how this technology, once mature, could revolutionize the organ donation process. In the United States alone, more than 120,000 people are waiting for an organ transplant.

3D scanning, meanwhile, is being used by doctors in Scotland to create near-identical external ear implants for children with microtia. The condition causes the external ear to be misshapen, and while non-life-threatening, can have psychological effects on the children. Doctors have recently moved from a traditional 2D drawing process—in which they would trace the ear on a piece of paper to start—to one that involves 3D scanning and printing, which allows for more exact ear implants that can be 3D printed right in their office. Doctors are able to improve the children’s quality of life by providing better implants much faster, in some cases almost immediately, compared with the technology of the past.

3D scanned data has presented some challenges when brought into a CAD system to work with, though. Before now, 3D scanned data had to undergo a lengthy conversion process in order to be usable. Designers would have to build surfaces around the scanned data before continuing the design process. Convergent Modeling completely changes all of that.

Designers no longer have to bother with surfacing at all, because NX 11 with Convergent Modeling eliminates the surfacing step. Simply import your scanned 3D data and start designing. Powerful, yet easy to use, Convergent Modeling works well for anyone who may lack CAD expertise, yet needs to work with scanned data in design.

Convergent technology also supports 3D printing by enabling more complex, irregularly shaped designs that could not be manufactured using traditional techniques. We’ve seen applications in various industries where 3D printing and scanning go hand-in-hand, so it should come as no surprise that these technologies are tied closely together with Convergent Modeling. 3D printing in NX 11 combined with this new modeling method open up new workflows, such as scan > edit > print. You can learn more about Convergent Modeling and the technology behind it when you read George Allen’s blog post. George has more than 35 years’ experience in developing CAD software and has led the development of several cool technologies in NX CAD.

Configuring NX for Automatic Updates over LAN March 10, 2021 Welcome to this step by step guide by our NX expert Pat Mcmanus of Product Engineering Software here at Siemens.
Community Spotlight: Candra Diningrat and the… March 8, 2021 Meet Candra Diningrat. NX expert with a full design workflow of a Bugatti Chiron Pur Sport. This plus much much…
NEW: NX December release details December 11, 2020 The latest release of NX is here. See here to find out what's new to the world's most powerful and…