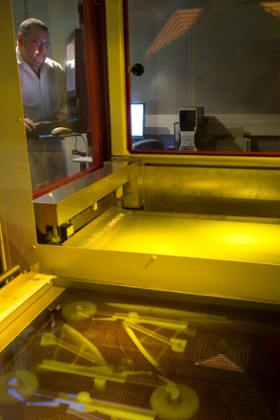 If you’ve been watching the news about the 2014 CES show in Las Vegas Nevada, you know that in addition to 4K televisions, 3D printing is one of the most exciting new technologies being highlighted at the show.

The earliest use of 3D printing was in rapid prototyping (RP) during the late 1980s and early 1990s.But 3D printed parts were fragile and machines very expensive.

Today, the cost of machines has decreased significantly.A machine that cost $20,000 a few years ago, can now be purchased for about $1,000.

Most 3D printers were used for building prototypes for the medical, aerospace, engineering and automotive industries.Rolls-Royce is considering using 3D printing technology to create lighter components for its jet engines.

Some companies like BAE systems believe that 3D technology can be used to design and produce parts that could cut the Royal Air Force’s maintenance and service bill by over £1.2m over the next four years. Are you using 3D printers for prototypes, or to create production parts?

Configuring NX for Automatic Updates over LAN March 10, 2021 Welcome to this step by step guide by our NX expert Pat Mcmanus of Product Engineering Software here at Siemens.
NX Render Blog Series: The Visualization Process for Heavy… October 8, 2020 Enjoying the NX Render series? Register for this webinar on visualizing the Digital Twin for Heavy Equipment! Introduction As you…
NX Render Blog Series: The Visualization Process for… May 13, 2021 Introduction Welcome back to part three of the NX Render blog series. We're taking you on a journey through the visualization…

This article first appeared on the Siemens Digital Industries Software blog at https://blogs.sw.siemens.com/nx-design/3d-printing-renaissance/