I’m in Washington D.C. this week judging communications presentations by 15 universities participating in the EcoCAR 2 final competition. I love seeing the students’ creativity, passion and professio...

I’m in Washington D.C. this week judging communications presentations by 15 universities participating in the EcoCAR 2 final competition. I love seeing the students’ creativity, passion and professionalism. It reminds me that the strongest real-world competitions go beyond just an engineering idea or product.

I’m reminded of a student team from Mexico I met at a robotics competition recently. Meet Team Nautilus 4010 – particularly three of their 24 members: Mariana Lima, Silvia Téliz and Fernanda Obscura. The team is from Tecnológico de Monterrey. In the video interviews below they share how they inspire future engineers and why they participate in robotics competitions.

(Thanks to my son Kyle for recording this one. I was recording it on a different camera but my version turned out fuzzy so we’ll go with my 10-year-old’s backup version ;-)).

They made it to FIRST Robotics World Competition on an Engineering Inspiration Award.

The award “celebrates outstanding success in advancing respect and appreciation for engineering within a team’s school and community.” The team won it at a regional competition just two weeks before the world event. They inspire through robotic workshops, promotional events and developing/mentoring a younger robotics team. They even organized 200 people for a “Tec Mob” flash mob. Judges were impressed with their mentoring program to students with low resources.Fernanda explains more about their outreach 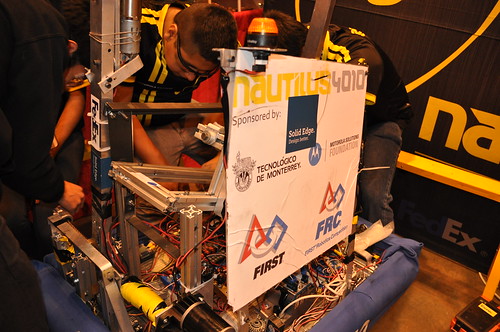 Their team is organized into engineering, business and communication. It is clear they have strengths in all. They designed and built their robot with Solid Edge that they taught themselves. They cut parts right on campus with a CNC machine. Marianna noted:

“The main plus that Solid Edge has is that it is compatible with CNC. Solid Edge makes everything easy. We can’t afford to buy parts so we make all the robot ourselves with a CNC machine on campus.”

Mariana volunteered for the team after she saw posters at school. She said not many schools have these kinds of programs. For her it is less about the competition and more overcoming challenges in preparing the robot.

“It helps you grow as you learn about everything from engineering to business. Organization is key to success. All have to work together. All have responsibility. That is really important.”

Lamberton Alvarez, one of the team mentors, explained the team found inspiration in the design of their campus, which is in the shape of a Nautilus seashell. Their business plans also highlights the shell as an example of the golden ratio.
To learn more about the team, check out this Prezi presentation and follow them on Twitter.

This article first appeared on the Siemens Digital Industries Software blog at https://blogs.sw.siemens.com/news/real-world-student-competitions-go-beyond-engineering/