“The relative cost of producing in the U.S. versus overseas is declining; productivity improvements due to automation are shearing per-unit labor costs in the U.S. while wages elsewhere in the world increase; domestic energy supplies are abundant; fewer worries about intellectual property and technology theft; more timely deliveries; political stability; and legal and regulatory systems that are clearer and more easily navigated.” 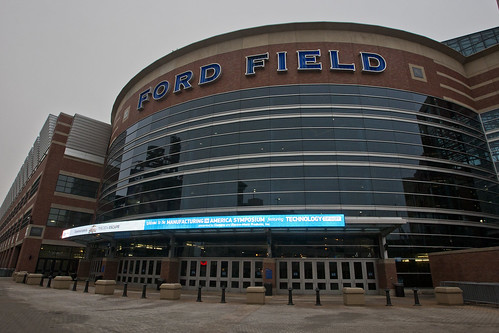 It’s against that backdrop that we’ve been having a series of conversations on the Software Revolution in Manufacturing. Last month we talked about training the next generation of technical rock stars in Ohio. This month the conversation moved to the Motor City, Michigan.

View some of the video and photo highlights on our interactive news release. Here are some of my notes from the event for a bit more of the discussion. Industry, academic and political leaders shared some stats and commentary about the future of manufacturing and future workforce: 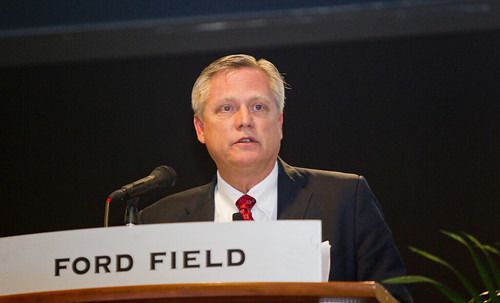 Chuck emphasized to the audience in Detroit the role software plays in modernizing manufacturing both from an infrastructure standpoint and in changing the image of manufacturing in the minds of the future workforce. He announced our latest in-kind software grant to Mott Community College.

This was an interesting grant to work on. We’ve been having discussions with several schools on moving beyond just a CAD software focus and consider implementing more PLM training. We’ve seen this work successfully in places like Iowa Western Community College. As Mott was reviewing its program and industry demand they had sudden increase in data management training.

Dr. Richard Shaink, president of Mott, noted they are taking more of a systems approach to training at Mott to provide the technical talent pipeline needed by Michigan manufacturers.

Nigel Francis, Senior Vice President, Automotive Industry Office, State of Michigan, noted the state needs to be more “loud and proud” of the tech talent in Michigan, where he emphasized they are training “super technicians.” 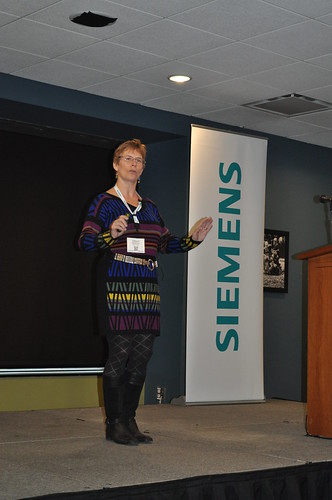 One of the customers who presented at our event in Detroit was ergonomics guru Allison Stephens of Ford. She shared with the audience that “what we are investing in is the right thing.” She shared how Ford uses software for ergonomics and planning the manufacturing jobs of the future in Ford plants. She noted how the “software becomes the communication tool.” Here is more of the story in Forbes: Ford Pilots a New Virtual Assembly Plant to Built its Cars. Greenfield also just published an article on Intosite: Ford uses Google Earth for Manufacturing Collaboration. 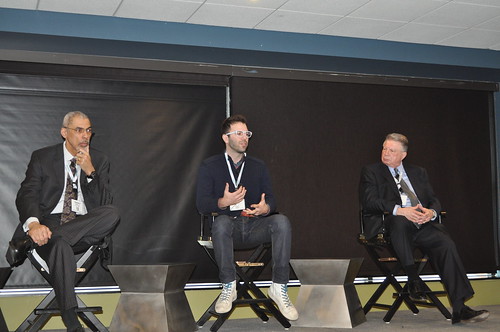 Focus: Hope’s William Jones noted students with the right aptitude can go from a GED to nuclear engineer. Flint and Tinder’s Jake Bronstein shared The Bluelace Project. He noted that there are probably 15-17 hands that touch those shoelaces – probably more than a car door so there is much to learn from the software and automation in the automotive industry. Automation Alley’s Ken Rogers discussed Michigan as one of the 15 manufacturing hubs in the country. Their new PLM Center at Oakland University provide software training and certification as well as pathway to a degree program.

Greenfield summarized our event in It’s not a Skills Gap. As the discussion above showed, if we get our software into the hands of the right community schools and train for specific “super technicians” or “technical rock star” rolls, the gap will narrow and this software revolution will result in jobs in Michigan and the U.S.

Could you be a Siemens Community Catalyst? December 1, 2021 We’re initiating the Siemens Community Catalysts (SCC) program to recognize and reward a select group of Siemens community members, who…
Tony Hemmelgarn at HM#21: Human-Centered Innovation May 12, 2021 Hannover Messe 2021 (HM#21) wrapped up on April 16. The event showcased both the future of industry (invariably digital) and…
Siemens partners with DARPA to enable groundbreaking IC… September 22, 2021 Siemens Digital Industries Software is now the first EDA provider invited to join the DARPA Toolbox Initiative.

This article first appeared on the Siemens Digital Industries Software blog at https://blogs.sw.siemens.com/news/future-of-motor-city-manufacturing/