Two weeks ago, I posted a guest blog from my Colleague Brooks Moses, who was getting ready for a conference, where he was presenting a paper. That event is now done and Brooks is back with his impressions of of NVIDIA’s GPU Technology Conference …

I’m writing this on the evening after the last day of NVIDIA’s GPU Technology Conference, wondering how a single event can be so exhausting and so energizing at the same time.

It really is an amazing event, and a testimony to the work that NVIDIA has been doing to build an ecosystem around GPU computing technology since the release of CUDA 1.0 only five years ago. In that time, they’ve grown to having hundreds of thousands of developers, about 2,800 of whom were at this conference. Ubiquitous availability of the hardware — a teraflop from your local computer store for $300, and it also plays computer games — is certainly part of that, but part of it is also the substantial effort that they’ve put into building a robust software foundation and encouraging its use in both academia and industry, and providing forums like this for users to learn from each other. If you missed it, NVIDIA is posting streaming video and slides from all of the presentations at their GTC On Demand site; some of them are already up and the rest will be soon.

For my part, I did finish the benchmarking I was talking about in my last post, just in time to add some final slides to the presentation and present it on Tuesday. The streaming video is already posted, and I think the slides will be going up shortly as well. I also wrote a whitepaper with some more details that will get posted on the Sourcery VSIPL++ website. 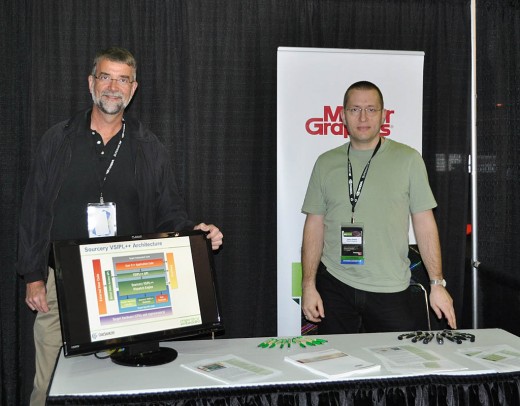 My colleagues Pete Decher and Stefan Seefeld also flew into town to help staff a small booth at the trade-show part of the conference — that’s them in the photograph. It’s always interesting talking to the people who come by at an event like this. We had a couple of people who knew of Sourcery VSIPL++ from the days when we developed it at CodeSourcery, and a lot of people who knew of all of the EDA products from Mentor Graphics but were surprised to find that we also did embedded software. I talked to people were working on all sorts of projects, from a radar system to a genomics program to a just-finished dissertation on software-defined radio.

I learned a lot of things that I can’t wait to try out. There were tutorials on ways to profile CUDA programs to get better performance, and several presentations on clever ways to write programs for task parallelism as well as data parallelism. And I have a dozen different ideas for how to improve the benchmark program I was working on to make it even faster.

But, for now, my bed is calling me.

Medical Devices MUST Be Secure September 24, 2021  I recently had the opportunity to present in a Webinar focusing on security needs of medical devices along with Patrick…
Security of Medical Devices – A Changing Regulatory… March 2, 2022 Over the past two decades, medical devices have been increasingly likely to be connected to the outside world using Wi-Fi,…
Medical Devices and the FDA, a History of Change August 26, 2022 As you probably know, devices of all types continue to get more complex, more interconnected, and in the world of…

This article first appeared on the Siemens Digital Industries Software blog at https://blogs.sw.siemens.com/embedded-software/2012/05/21/gtc-mission-accomplished/