Point-to-point (P2P) simulations find and report nets that exceed predefined resistance thresholds along a device interconnect path. When these resistance errors are much higher than expected, designers typically assume there is either a routing mistake or a false violation. However, to determine root cause, they must be able to identify exactly which segment of the reported pin-pair path is the major contributor to that high resistance value.

The Calibre® PERC™ coordinate-based P2P simulation functionality enables designers to place source and sink points along the net interconnect at locations they select. These points allow measurements to be made that cannot be easily calculated by simply using individual resistor body data. For example, with just resistor body data, designers only see the resistance of each polygon, but not how those individual resistors might be combining together (especially in the case of parallel resistances) to form one effective resistance. This ability to place sources and sinks along the interconnect path polygons when setting up P2P simulations also allows designers to segment portions of the routing that contain parallel paths to get effective series total resistances.

Even better, this path segmentation process can be repeated, increasing the granularity by further breaking down path segments, until designers understand exactly how and where to fix the routing to decrease the total effective resistance.

When a P2P simulation result is significantly higher than what is typically expected, segmenting the net to isolate and identify a high resistance point can be an effective way to begin navigation to the problem areas causing P2P violations in an IC layout. Using Calibre PERC coordinate-based P2P simulation to segment problematic nets into smaller sections for closer examination can be a very powerful approach to debugging P2P results quickly and effectively. 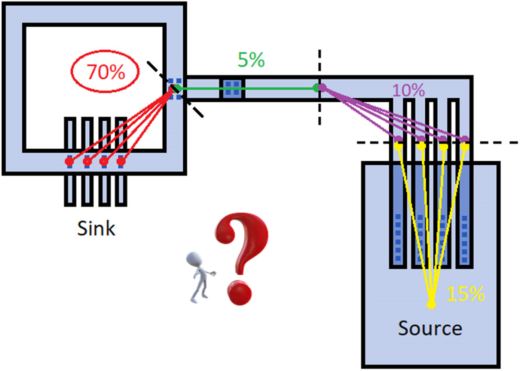 If you’re spending too much of your time trying to debug P2P resistance errors, take a few minutes to read our technical paper, Debugging P2P results through resistance segmentation. It can put you on the path to fast, accurate P2P resistance debugging and correction.

Ease on down the road…why “ease of use” is the next big… March 16, 2022 Ease of use is an important issue when enhancing product functionality and introducing new technology. Calibre Design Systems considers ease…
DAC in December?? A Review of Calibre Design Solutions at… March 3, 2022 Did it feel a bit weird to be submitting research papers for DAC 2022 while packing to go to DAC…
Is there a quick and easy way to calculate P2P resistance or… February 28, 2022 By Li Li Why, yes, there is! As you know, Calibre® PERC™ logic-driven layout (LDL) current density (CD) and point-to-point…

This article first appeared on the Siemens Digital Industries Software blog at https://blogs.sw.siemens.com/calibre/2020/08/12/breaking-it-downhow-interconnect-segmentation-helps-resolve-p2p-resistance-errors/