Since last week it’s been the standard middle-class dinner party question: Did you pre-order a Tesla Model 3? Keep in mind that Tesla sold less than 2,500 of its initial Lotus-based Roadster model between 2008-2012. It’s sort of staggering to ponder the market expansion since then given the inroads everywhere from the ranks of Hollywood A-list celebs to folks in my Austin neighborhood in just a few years.

More staggering was Elon Musk’s April 3 tweet, which translates into a few billion dollars for the company and of course lots of headlines, including about implications for company’s balance sheet and (since it’s Telsa and Musk) the planet. And by cleverly starting at premium level vehicles, where margins can be higher for low volume production runs, and simultaneously establishing the brand as premium, the Model 3 has the brand appeal of an Apple or BMW right out the gate. All brilliant stuff and I’m a huge fan of Elon Musk and Tesla, which has been a Mentor Automotive customer for several years. In 2013 we announced that Tesla had chosen our design and simulation tools to provide the agility in engineering required to scale production and integrate with suppliers, a task that remains central given the production ramp that’s ahead.

Can we say that Tesla has conquered the mainstream, sales are assured, a turn to profitability is on the horizon, and stockholders can feel secure in their investment? Well, probably. Maybe. Last year Tesla sold just under 35,000 electric vehicles and the target is for around 80,000 vehicles this year. With increasing production of the falcon-wing Model X, this target looks realistic, assuming no major production bottlenecks. Among the questions buried in the Telsa media deluge is: What exactly is the competition? Nissan Leaf? BMW i series? Chevy Volt? In fact the company that sold the most electric vehicles last year was BYD Auto, a subsidiary of the massive BYD Company headquartered out of Shenzhen, China and backed by Warren Buffet. Last year BYD Auto sold about 60,000 plug-in cars, the vast majority in China.

Like Tesla, BYD is investing significantly in battery technology. BYD is considered a major innovator for battery technology and battery management systems globally. In February, BYD America Vice President Michael Austin told Autoblog that bringing their Qin model to the United Sates would be a game changer although news on if or when this might happen has been scarce. BYD has noted that 50 or so of their e6 SUVs have been imported for taxi use in New York, and there is another small fleet used by Uber in the Chicago area. If BYD expands into Europe and the United States, and Tesla continues to push into China and Europe, which company will win this epic new energy vehicle market share battle, which will play out around the world? China has been the world’s largest car market by volume for some years now. Europe has traditionally been considered the center of automotive innovation with its sizable number global premium brands. And the United States has Silicon Valley becoming the new center of automotive technology, leading the whole digitalization of the automobile. 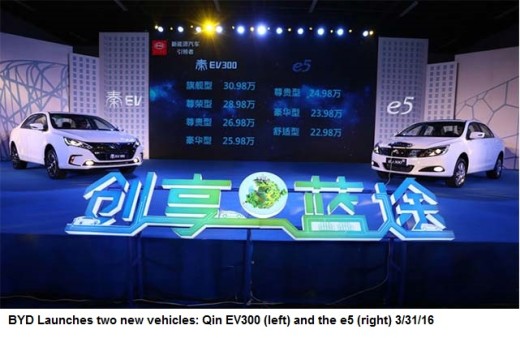 BYD is clearly well positioned globally. The company and has the resources and government investment money to support the massive R&D needed in this sector, and the global partnerships (in 2010 they created a 50/50 joint venture with Daimler for electric vehicle development in China). I remember seeing a demo of a BYD remote self-parking car in China a few years ago. It was clear they were thinking connectivity, demographics and the long-term game. Meanwhile, Tesla has arguably broken into the mainstream in the United States and is making inroads into Europe, where their premium brand value is slowly becoming established, likely with a boost from various government incentives for EVs. (Sales are strongest in Norway and the Netherlands which lead Europe in stimulating green transportation.) Both companies are investing hugely in battery technology, which will really determine the winners in this space.

I think the question of who will win on the global stage is less interesting than pondering who on earth will be able to catch this pair of companies in the race for the fully electrified powertrain? Note as this unfolds how Tesla and BYD are coming at the challenge from completely different angles. BYD is investing and refining their technology over time, establishing themselves in their massive home market. Tesla is rocketing (pun intended!) to the consumer mainstream market with clever brand building, a technologist-physicist-humanist visionary CEO who by all accounts is most interested in using engineering and science to solve the biggest problems facing our species and not necessarily to amass a personal fortune.

Also watch how and with what companies Tesla and BYD form partnerships as they scale in all sorts of ways. With their increasingly massive array of sensors used to monitor vehicle performance, connected cars generate around 25 GB of ‘data exhaust’ per hour, a point made recently at a European conference by Hans-Bert Bong of Ford, another Mentor customer. Invariably this will lead to the question of big data analytics, and some kind of cloud computing add-on. Tesla already makes use of in-house analytics (notably deployed to refute an unfavorable 2013 NY Times review). And Tesla has established smartphone-like over-the-air software updates as somewhat standard. But the logical extension of this is into the areas of deep learning for cars and AI, technologies which point the way to autonomous driving, mobility on demand, and selling services as part of enhanced vehicle value.

So I think the question for your next dinner party shouldn’t be about the Model 3, but rather how all these would-be buyers see electric vehicles generally? I see them as part of the future of mobility, and impossible to separate from connectivity, digitalization, big data and autonomous driving. And ask about Tesla vs. BYD (and Tweet at me @AndyMacleod_MG if anyone has heard of the latter). I’m guessing the two companies will continue stretching their lead, but I suspect we have only seen a tiny part of their long term game plan to date.

One thought about “Tesla, BYD Auto and the quest to take e-vehicles mainstream”

This article first appeared on the Siemens Digital Industries Software blog at https://blogs.sw.siemens.com/automotive-transportation/2016/04/07/tesla-byd-auto-and-the-quest-to-take-e-vehicles-mainstream/