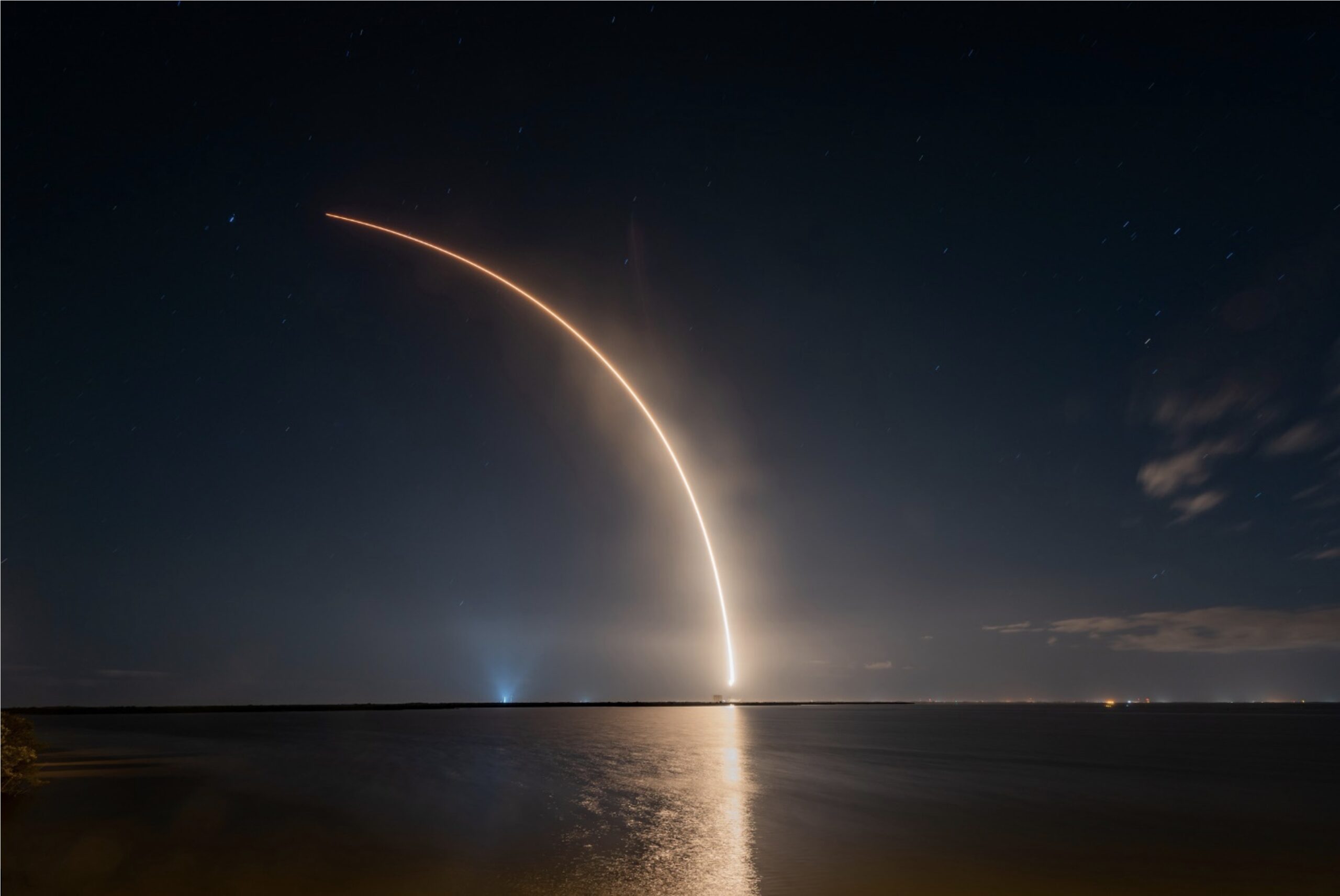 Okay, so what’s your earliest childhood memory of space?

When we’re young we are so impressionable. And the idea of traveling into the final frontier can easily spark the imagination.

For me, it was probably Apollo 8. It was right before Christmas when we watched the Saturn V rocket blast off on live TV. The broadcast was a big deal. Also, a crew member on that mission took a photo of Earth which is today, perhaps the most quintessential photo ever taken of our beautiful Blue planet. In fact, the photo is known as Earthrise.

Of course, Apollo 11’s lunar landing in July 1969 will forever be etched in our collective memories. If you were around back then, I bet you can remember exactly where you were when that historic event took place.

Throughout the decades we’ve had other memorable moments in space: the space shuttle, the International Space Station (ISS) and a myriad of satellites used for navigation, communications, defense and weather. We recently completed our sixth Mars rover landing. And don’t forget the Hubble space telescope – going strong after 30 years and still taking breathtaking photos!

Just one of the many photos taken by the Hubble telescope. This photo was taken in 2010, called “Mystic Mountain.” Source: NASA, ESA, M. Livio and the Hubble 20th Anniversary team (STScl).

The fact is, we love going to space and exploring the great “unknown.” Within the last 20 years, with advances in technology and new legislation, space is no longer the province of big government agencies. Some are calling this “Space 4.0” – a new era of deregulation, cooperation, and competition. Where billionaires and dreamers alike, are free to pursue their starry-eyed visions. Where commercial and private entities compete in areas such as space tourism, space exploration and sending satellites into orbit.

We are witnessing the democratization of space.

It seems the early stages of Space 4.0 are favoring Elon Musk, Jeff Bezos and the Sir Richard Bransons of the world. Of course, start-ups are stepping up as well, look at Rocket Lab, Firefly, Axiom Space and others. And if you’ve been around technology long enough, you know eventually, through the progress of a few technology mavericks – eventually, society as a whole often benefits. Think of the automobile, the color TV, even the mobile phone. Whether we’re talking a spacecraft, rocket, or satellite – for commercial or defense purposes – or even an orbiting space hotel, the fact remains, innovation and technology have arrived in a very powerful and epic way.

Engineering priorities for a new era

The accelerated privatization and the “for-profit” mentality of Space 4.0 have dramatically changed the entire space industry landscape. This thinking has created an enormously fertile breeding ground for new applications and ambitions. How do growth, expectations and pressure affect the priorities in product engineering? How can traditional public agencies remain relevant, and where are the opportunities for newcomers to successfully take a piece of the intergalactic pie?

The importance of reducing time, risk and cost

Where public agencies are likely to struggle most is the sudden emphasis on market-driven priorities such as time and cost and their relationship to risk. This is a natural priority for space engineering that tends to become increasingly stringent in the context of manned missions.

For decades, agencies were focused on delivering excellence against certain budgets. Their primary customers were mostly public entities, such as defense departments, meteorological institutes, large public service providers and so on. But we’re in a new era where the price the end-user pays dictates the business. Being successful in a commercial context requires low cost, a different approach to risk and more agile, customer-friendly business models. It’s typically where traditional players have difficulties, and where start-ups see opportunities.

And that’s where digitalization comes in

All of this innovation in space is aided by digitalization. Through digitalization, teams are able to achieve time and cost savings at both the product and process levels. By using a digital twin, companies can dramatically reduce time-to-market by shortening the decision-making process, development time and testing loops. Digital threads enable multi-disciplinary processes and integrate data from the beginning of the product lifecycle to final sustainment – and throughout the entire process, there’s full traceability.

With a digitalized work environment, teams gain a richer understanding of product and process. This helps users address complexity head-on and reduces risk while allowing teams faster implementation times. These capabilities play a crucial role for companies and agencies who want to be more competitive in our new space era.

How the digital enterprise fuels Space 4.0

The flow around the capsule with temperature distribution on the capsule’s surfaces.

Most space projects are complex by nature. They include advanced materials and systems combined with a multitude of physics. Consider highly controlled propulsion systems or robotics with built-in artificial intelligence. There are so many parameters involved in the development that engineers need a digital twin to even come close to success. At the heart of this digital twin are realistic, prediction-capable simulation models to optimize all system aspects simultane­ously, from the early beginning of the design cycle. Further, space systems operate in the harshest of environments where different laws of physics might apply. Spacecraft that leave our protective atmosphere will be exposed to different gravity conditions, extreme temperature fluctuations, cosmic radiation and more. Engineering work on space-bound systems must take that addi­tional complexity into consideration. Simulation via the digital twin plays such a critical role.

When we talk about the digital twin it’s more than managing or interpreting simulation, a digital twin also automates the design process. For example, think of the various design disciplines involved in the design of landing gear. A variety of schematics, CAD files, and diagrams are connected and integrated via the digital thread. Within each step, teams have a continuous loop of generating design options, evaluating the options against key criteria, and validating that the design meets increasingly complex design requirements.

With a comprehensive digital twin, teams can continuously optimize both product design and production activities. This continuous optimization allows users to make decisions by simulating the virtual model with a closed-loop connection to the physical world.

“Launch it before you build it”

The digital twin provides teams the unique capability of building a virtually integrated vehicle. In doing so, teams can “fly” the vehicle before it’s physically built. In addition to reducing risk during test programs by proving the design through virtual tests, this approach enables teams to model complexity and focus on the more critical flight conditions and gain a deeper understanding of flight dynamics and possibilities.

These are just a few examples. A digital twin can also help introduce virtual and augmented reality into the design and manufacturing process. It can take additive manufacturing to a whole new level. Depending on project and scope the digital twin has limitless applications.

An overarching digital infrastructure, in which all data regarding the various product lifecycle phases are collected, managed, kept up to date, and made accessible for all relevant program stakeholders, benefits space engineering priorities tremendously. That platform should weave an all-encompassing digital thread of information, from requirements definition to exploration, to detailed design, to manufacturing, to qualification, certifica­tion and beyond. It’s the only way to keep a product in space connected to its original requirements and to trace the impact of all decisions and actions made throughout the program.

A digital transformation gives teams the capability to “launch it before you build it.”

By its openness, flexibility, and ability to deliver world-class solutions for every product lifecycle aspect, and by the way, all those processes are integrated, the Xcelerator portfolio from Siemens Digital Industries Software is the perfect orchestrator for any space program. And now, Xcelerator is offered as a Software as a Service (Saas), known as Xcelerator as a Service, or XaaS for even greater ease and convenience.

At Siemens we like to say, “Where today meets tomorrow.” The new XaaS offering is definitely a little piece of tomorrow – to be enjoyed by current and new customers today.

I’ve touched on the implications of Space 4.0, but the story is far more involved than what’s covered here. This just-released white paper “Digital twins: Your key to successful spacecraft design” is a  fascinating read and goes into greater detail not only on space as the final frontier but the many technologies that can help teams achieve their goals and dreams.

I urge you to check it out now… Plus, you can always visit the Siemens Aerospace and Defense website for a more comprehensive look at Siemens A&D.

And one final word: As it stands now on December 22, 2021, Space 4.0 takes another big step forward with the launch of the James Webb Space Telescope. I mentioned Hubble – this is Hubble on steroids and the astrological community is abuzz! This is an international space partnership and if all goes as planned, the Webb telescope will explore the cosmos in a totally different light – giving us humans a whole new understanding of distant galaxies – and of our dear planet Earth.

*A famous phrase from a character Robin Williams played in a U.S. sitcom called Mork and Mindy in the late ’70s/early ’80s. Robin played Mork, a goofy alien visitor from a faraway planet called Ork. The phrase was primarily used to say “goodbye.”

Scott Salzwedel is senior technical writer and corporate communications writer involved in the Siemens Aerospace & Defense Industry. In addition to being the writer/host of Talking Aerospace Today, Scott is a writer of white papers, articles, blogs, videos and websites at Siemens.

This article first appeared on the Siemens Digital Industries Software blog at https://blogs.sw.siemens.com/thought-leadership/2021/12/16/to-boldly-go-where-no-digital-twin-has-gone-before/