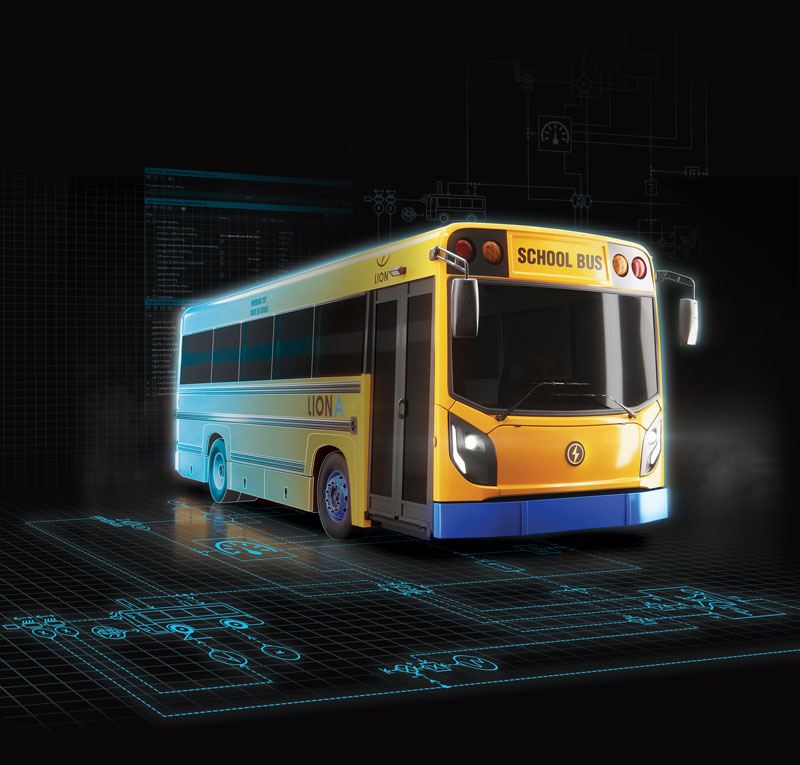 Mayors from over 90 cities representing 650 million people are part of the C40 Cities Climate Leadership Group determined to address climate change in their own cities — by 2050, it’s expected that two-thirds of the world’s population will live in cities. Part of the pledge these leaders have taken is to procure only zero-emission buses by 2025.

As urban areas grow, the need for sustainable mass transportation must be met. There simply isn’t enough space to accommodate an influx of cars to match the increasing population of major cities. To ensure greater urban sustainability, stricter laws and regulations are being put into place, challenging manufacturers to meet stringent emissions goals, some of which include completely removing emissions from vehicles.

Most large cities are looking to update their transportation systems and fleets, whether it be for public transit or public works. That’s where the Quebec-based Lion Electric Co. comes in. As a leader in electric school bus development, they have engineered an all-electric school bus, with an estimated 15 years of battery life, and currently have hundreds deployed throughout the United States.

Lion Electric Co. used simulation software to model and optimize battery design and thermal management; a crucial part in the success of their development and implementation of an electric bus. Simulation not only improved battery performance assessment but ensured their team could gain deeper insight into the analysis. Switching to simulation also meant the end-product — a sustainable all-electric vehicle — was more reliable and would reach market at a lower production cost.

To develop an electric-powered bus, Lion Electric Co. engineers had to consider the thermal management of the battery as well as its integration into the overall vehicle. Engineers from the early development stage needed to be able to assess the overall vehicle performance over real drive cycles. This ensured they could estimate a realistic range.

To optimize thermal management, engineers had to identify coolant-flow balancing in cooling-heating loops. This involved performing subsystem analysis to gain a precise view on how the drive cycles and charging scenarios would affect the battery’s capability to develop the appropriate thermal management solutions.

By understanding these needs at the beginning of the product development process, Lion Electric Co. could better avoid recalls due to design errors. This helped prevent safety concerns as well as potential increased costs and time-to-market. Because there were various physical phenomena coupled together, such as mechanical, electrical, hydraulic, thermal, motion and vibration, they needed to be able to validate different approaches and scenarios as early in the design cycle as possible.

Also important to battery design was how to integrate numerous systems, sub-systems and elements, such as electric motors, batteries, and heat exchangers to for lighting, dashboards, windshield wipers, doors and HVAC.

Using system simulation software, engineers and design teams could develop a battery, integrate it into the vehicle and assess its performance, all in the early stages of the development cycle. How the Lion Electric Co. accomplished they battery design and thermal management involved the support of Maya HTT, an engineering service company. The Lion Electric Co. was able to start designing the cells and all the thermal exchanges of the cells first with the aluminum box, and then within the overall environment of the battery.

Maya HTT and the Lion Electric Co. could then test the performance of their battery design as a physical twin in a climate-controlled room and adjust the digital twin based on the results. This early analysis offered a series of benefits including improved electrical performance and heat rejection, tests for clients proving the anticipated range or payload within a specific use case, and the capability to make better informed decisions from the very beginning.

What system simulation software allowed the Lion Electric Co. to do was to create reports, analyze considerably more variables in a fraction of the time and refine the product more efficiently. From there, they used the simulation model of the vehicle to validate the cooling system and ensure temperatures did not exceed what was optimal. If modifications were required or requested, reruns of the simulation were completed quickly.

The Lion Electric Co. could use the additional time to dive deeper into their analysis and improve their battery performance assessments. In turn, they could develop, optimize and build the most suitable battery architecture and related thermal management, and bring a more mature and reliable product to market based on their findings at the start of production.

Modifying products after production begins is costly. Recalls due to design errors that affect the safety of a vehicle is expensive and impacts the OEMs reputation. The benefits of system simulation at the start of development offers is lower product development costs, saved time and the ability for companies to have a competitive edge to design more efficient and functional products.

Simulation is also part of ensuring brand credibility.  If organizations aren’t using simulation software within their design and development, they risk being behind the curve in terms of engineering expertise and will have less credibility in the marketplace.

Through collaboration between the Lion Electric Company, Maya HTT and Siemens Digital Industries Software, the teams could create a digital model of the battery reproducing the thermal exchanges within the battery. Using Amesim, part of the Siemens Xcelerator Portfolio, they were able to define the best architecture for all the elements of the battery.

Katherine Sheriff: Pioneering the Legal Framework of AI:… March 3, 2021 Listen to Katherine Sheriff Podcast HERE When does a machine become a person in the eyes of the law? Katherine…
Behind the Scenes: How Policy Shapes the Future of… February 17, 2021 Listen to Sharon Masterson Podcast HERE In this episode of the Future Car Podcast, in our series “Women Driving the Future,”…
Building a More Accessible Transportation Future: Podcast… April 15, 2021 Meeting the Needs of the Moblity Challenged. Listen to Building More Acessible Transportation Future Podcast HERE Something we rely on…

This article first appeared on the Siemens Digital Industries Software blog at https://blogs.sw.siemens.com/thought-leadership/2020/06/10/how-one-company-put-a-zero-emissions-bus-on-the-road/