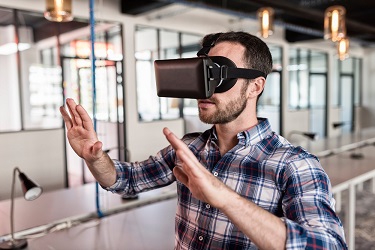 Virtual reality (VR) is technologically ready. However, even though there’s a growing interest to use it to increase developmental capabilities, many in the conservative marine industry still view VR as a toy with no real engineering value. This reluctance to deploy VR at its full potential hinders an industry that would benefit from developing a truly mature digital environment.

Virtual reality is the bridge allowing companies to visualize the digital twin in real-world situations. As Ian Fisher, Senior Technical Architect at Siemens Digital Industries Software, commented: “Augmented and virtual reality is the tool that sits between the two (digital twin and real-world information), essentially helping people to complete the marriage of the virtual and physical worlds and improve both.”

What are the different realities?

To put it simply, today’s engineering realms consist of two worlds, and a whole spectrum of realities. The two worlds are namely:

Add to this human perception, which the Business Dictionary defines as: “The process by which people translate sensory impressions into a coherent and unified view of the world around them…Perception is equated with reality for most practical purposes and guides human behaviour in general.”

As digital and physical worlds overlap, the sensory impressions received by the user create his/her reality. Depending on the sources of perception, a taxonomy of realities has been defined as follows:

Virtual reality:  The user is disconnected from the physical world and fully immersed in an artificial digital environment. Think of 360° videos viewed with proper equipment rather than on a computer screen. (Fig. 1)

Mixed reality (MR): The digital and physical worlds are blended, defining a spectrum known as the virtuality continuum. On the one end of the spectrum, virtual objects are anchored to the physical environment; these virtual objects are not just overlaid but can be interacted with (Fig. 3). On the other end of the spectrum, the user is fully immersed in a digital environment that is anchored to the physical world.

How is this going to impact the marine Industry?

Here are a few examples of how the marine sector can implement VR applications:

Training. Whether it is a crew learning how to deal with unexpected or hazardous situations, or shipyard workers learning to perform complex tasks using new machinery, an immersive environment can provide a valuable practical platform where mistakes can be made without the real-world costs or dangerous repercussions.

Sales & Marketing. VR is a valuable tool to convey concepts to potential clients or to encourage them to purchase the real experience. In 2016, Carnival Corporation teamed up with AT&T and Samsung to launch a new type of marketing campaign to entice consumers to purchase cruise packages.

Communication & Collaboration. As RealityTechnologies.com puts it: “The best aspect of virtual reality, at least from the standpoint of workplace productivity, is its geographical agnosticism.” VR makes it easier to conduct meetings regardless of location. It also allows system experts in remote locations, such as oil rigs, to plug in via VR and guide a local engineer through essential repairs.

Design reviews. Using VR makes it possible to communicate the spatial subtleties of a design and ensure that expectations are aligned early in the design process, thereby reducing the risk of late, costly changes.

VR in the marine industry

There are several ways that VR is currently being used in the shipbuilding industry:

1. Visualizing the digital twin of the product with a focus on the product itself. This capability shows its true value when it comes to reviewing a structural element before it is built. VR is an easy way to inspect the element from all angles in order to ensure it conforms to expectations. For example, Feadship uses VR to review the piping layout, including access for the maintenance crew, during the initial design phase. Another way digital mock ups may be used is to communicate how the final design of a vessel will be like, for example showing a potential buyer what the interior of the superyacht will look and feel like.

2. Visualizing the digital twin of the product, with a focus on the fluid flow – air or water, external or internal, service fluids or non-solid cargo. Prior to VR, you could see the results as a graphical 3D projection on a 2D computer screen, as a few cleverly pulled-out charts, or as an array of numbers. VR gives you a whole new way to feel the results. It allows you to analyze them in a way that was not possible before and gives you some insight that you might otherwise have missed. If you worked for a passenger ship builder, for example, you could have virtually walked on the deck, sat on a lounger and feel whether the exhaust plume might cause you any “smell discomfort”, bar the inconvenience of being exposed to it. (Fig. 4) Or you could swim near the hull and propellers and see if there are any recirculation or stagnation areas that could cause a less-than-optimal performance.

3. Visualizing the digital twin of the process in the digital twin of the shipyard. This VR environment has been specifically developed for the engineering, planning, assembly and marketing of the manufacturing process. Getting immersed into a full-scale scene of the shop floor gives a better understanding of the layout and processes and helps identify issues before they actually happen saving considerable cost and time. Multi-site collaboration and communication is also facilitated, especially when teams are scattered around the globe, resulting in less travel expenses. (Fig. 5)

VR is still in a growth phase

Virtual reality has a long evolution in front of it. Ideally, the shift would move from a dedicated room where all VR gear is located, which is where most adopters tend to have it currently, to having a headset hanging in every cubicle in an engineering department.

Virtual reality should be a day-to-day engineering tool.  What you can do with a VR headset, in terms of checking a complex CAD assembly, to assessing the quality of a surface wrap or mesh refinement, to critically assessing results, far surpasses what you can do today with traditional keyboard and mouse.

As manufacturers utilize digitalization technology to increase productivity, VR can bring a real-world view of what the digital twin creates.

Click here to learn more about the power of virtual reality.

Jan van Os completed his technical studies in Naval Architecture in 1987 and was employed at Damen Shipyards as a Project Engineer, Project Manager, Yard Manager and Managing Director of a ship repair yard. From 2009 to 2017 Jan was Product Director Offshore & Transport, a department specializing in the design and construction of Offshore Support Vessels, Multi-Purpose Vessels, Offshore Patrol Vessels, Fishing Vessels and Custom Build Vessels. Jan is the current VP Marine Industry for Siemens Digital Industries Software .

Matt Godo obtained his Ph.D. in Biomedical Engineering from the University of Toronto. He spent several years as a CFD Applications Engineer before starting his career as a software Product Manager, with a strong commitment to delivering solutions to meet challenges in the areas of visualization and data analysis. Currently, he is the Product Management Manager for the Simcenter STAR-CCM+ Platform Department. He continues to explore how immersive Virtual/Mixed Reality technologies can be used to better understand and communicate the wealth of information generated by numerical simulations

Agile Product Development in the Aerospace and Defense… October 7, 2021 I had the privilege of interviewing Jim Roche of CIMdata and Dale Tutt of Siemens Industry Solutions Software on Agile…
Katherine Sheriff: Pioneering the Legal Framework of AI:… March 3, 2021 Listen to Katherine Sheriff Podcast HERE When does a machine become a person in the eyes of the law? Katherine…
Susie Wolff, Driving Force for Sustainability & Diversity,… February 2, 2021 Listen to the Susie Wolff Podcast HERE I had a great conversation with Susie Wolff, the first women in 22…

This article first appeared on the Siemens Digital Industries Software blog at https://blogs.sw.siemens.com/thought-leadership/2019/10/17/visualize-the-digital-twin-with-virtual-reality-and-other-reality-technologies/