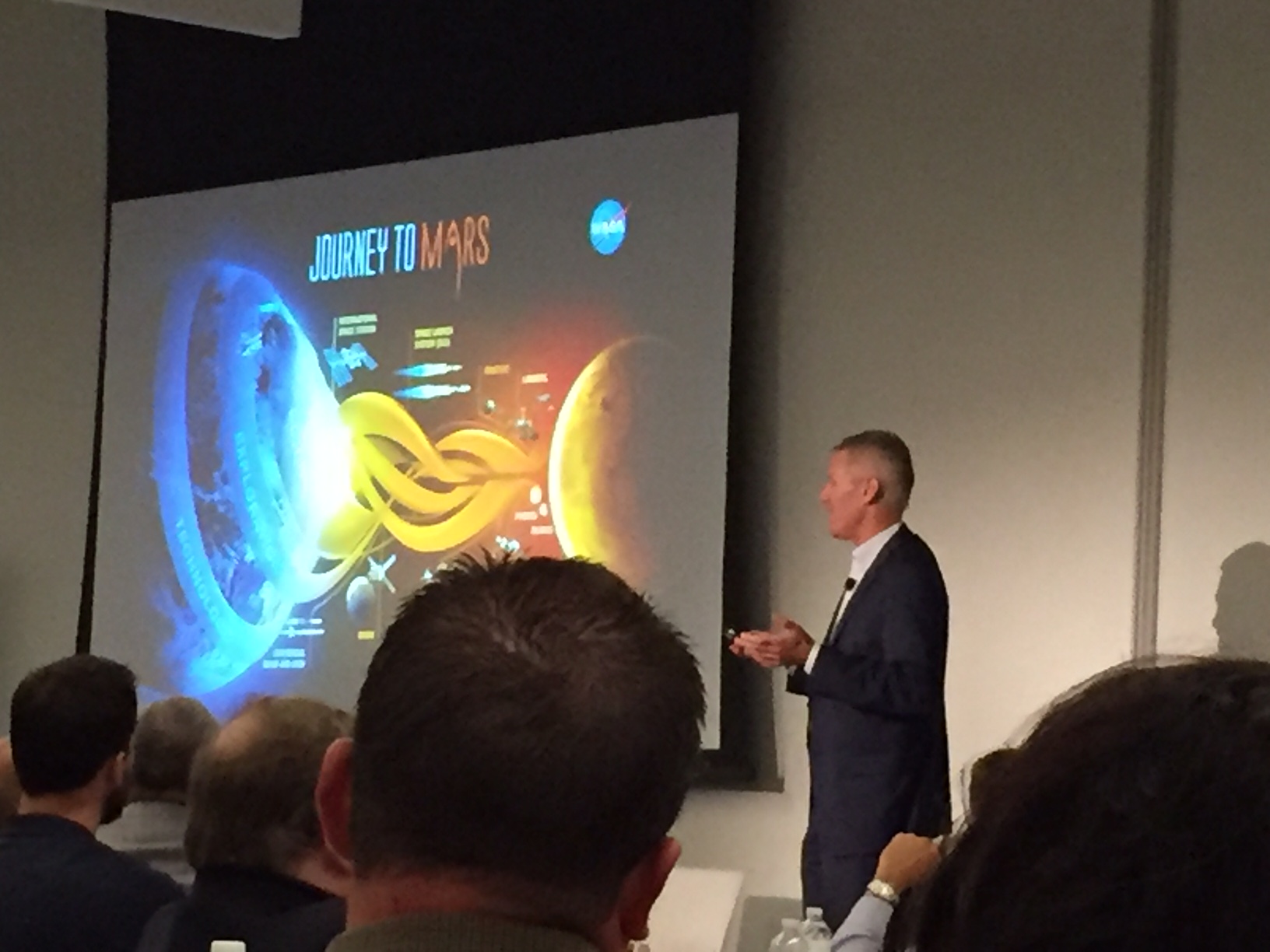 The digital twin is not only transforming the way companies engineer and manufacture their products; it’s causing disruption in all industries as companies work to get their products to markets faster than the competition.

This disruption is forcing companies to rethink their entire product lifecycle process strategy, and with good reason.

Those who fall behind will have an extremely difficult time catching up to the competition, and they risk disappearing from the market all together.

These were some of the ideas explored at the Digital Twin Summit. The event’s focus was on the digital twin’s application in aerospace, but companies from other industries attended to learn how the digital twin transforms digital product development and manufacturing.

Here are four important takeaways from the event about the digital twin’s role in giving your company a successful, future-proof business.

1 – One piece of information can have the biggest impact on your business.

Barry Chapman, Vice President of the Aerospace and Defense Industry for Siemens PLM Software, shared a story about an infamous 1908 baseball game between the Chicago Cubs and Brooklyn Dodgers to demonstrate how one piece of information can have the greatest impact on how you do business.

With a tied score, a young player named Fred Merkle came to the plate with two outs and runners on first and third bases. Merkle hit a single to the outfield, bringing the runner on third base home. The New York crowd thought the game was over and rushed onto the field.

Unfortunately for Merkle, he went back to his team’s dugout without advancing to the base, and Cubs second baseman Johnny Evers saw. He yelled to his teammate to throw him the ball for the out and then got the umpires’ attention about Merkle’s error. The umpires ruled Merkle was out and the run didn’t count, but the game couldn’t continue because so many people were on the field; the game ended in a tie.

How did Evers know to get the ball? During his story, Chapman pointed out that Evers frequently talked to opposing teams and asked about what they had seen and experienced in their games. By doing this, Evers found out this same incident happened in Pittsburgh earlier in the year, which is how he knew what to do.

That kind of collaboration, Chapman says, is what can inspire the biggest change.

“You try to grab that piece of information, that little nugget, to bring back to your business,” he said. “It can have an impact.”

2 – The digital thread’s role will become more important the longer it’s in your company.

The digital thread — which can connect information about product performance, as well as requirements for manufacturing, design features and shop floor inspection points — is the main differentiator between digitization and digitalization.

Creating digital versions of the world doesn’t offer you much value, said Dave Riemer, the Vice President of Aerospace and Defense Strategy at Siemens PLM. The real value comes from the digital thread because of how it connects information.

“It’s about relating information,” he said. “It’s about understanding the ‘why.’” And the longer the digital thread is in your company’s enterprise, it will likely become a major influence on how you complete certain processes, such as the way you write requirement specifications.

Brench Boden, the Chief Technical Officer at the Digital Manufacturing and Design Innovation Institute and the lead for the Air Force Manufacturing Technology Program’s Advanced Manufacturing Enterprise technical area, thinks that this kind of change will likely transform borders between processes.

“We’ll smear the boundary between the requirements definition phase and the beginning of detailed design,” he said. “That’s part of the goal of the digital thread: making boundaries disappear.” 3 – Turning your company into a digital enterprise isn’t easy, but it is worth it.

Alastair Orchard, Vice President of the Digital Enterprise Project at Siemens and one of our Thought Leaders, touched on one of the biggest obstacles many companies face when considering digitalization: people.

Getting people onboard with digitalization can be a difficult obstacle to overcome, but it can be done with the right approach. Orchard discussed the Siemens factory in Amberg, which is now 75 percent automated, and how the mindset has evolved in Amberg.

“We had to retrain a lot of people,” he said, adding that a certain demographic didn’t really know how to use computers at first.

Now employees collaborate around data and the virtual world to solve problems. “It’s a completely different mindset than it was.”

And the workforce didn’t decrease during the change: there are still 1,200 employees in Amberg — the same number of employees Amberg had when this work began in 2001.

Becoming a digital enterprise can also give you more options in how you approach your work. During his Teamcenter demonstration about how the digital twin works can stream information in real-time for manufacturing and factories, Orchard used a Microsoft Hololens virtual reality headset to show how the real and virtual worlds can guide operators instead of a screen in Teamcenter.

Many companies use this and other methods to complete the necessary work, and “they’re all using our data, taking information from us and contributing to it,” he said. Orchard demonstrates the digital twin’s role in how some companies use virtual reality to work through their digital product development and manufacturing processes. Orchard uses a Microsoft Hololens headset to show how the virtual and real worlds can guide operators rather than a Teamcenter screen.4 – Small companies are causing the biggest disruptions in industries.

This disruptive effect is happening because “there’s a Mount Rushmore of innovative thinkers” disrupting the innovative space. One of those innovative thinkers is Elon Musk and his company, Space X. What is unique about their vision, Chapman said, is that they’ve taken launch vehicles and dropped the price by 40 percent – and they’re still trying to drag the price down further.

Their vision of landing and reusing an item that was once thought to be unusable is disrupting the business, and other companies – mainly smaller ones – are taking note, Chapman noted.

Companies like United Launch Alliance now have a management team that is looking to drive down cost. Spike Aerospace, a company trying to create a low boom supersonic jet, is accelerating development and ramping up funding.

Young companies are giving investors confidence to fund these new projects, Chapman said, and that funding is allowing young, innovative companies to insert themselves into the market – which has a massively disruptive effect.

“What’s exciting for one company is disrupting another,” he said. “That’s causing this urgency to do something.” Chapman discusses how the vision of going to Mars is transforming an entire industry.Tell us: How do you see the digital twin transforming your industry?

This article first appeared on the Siemens Digital Industries Software blog at https://blogs.sw.siemens.com/thought-leadership/2016/07/25/four-important-digital-twin-takeaways-for-every-industry/