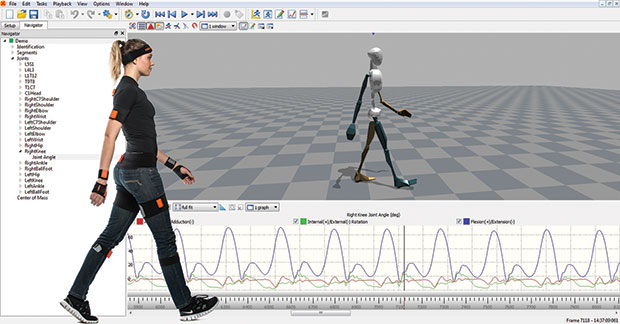 In the article, “Looking for the Ghost in the Machine,” Kenneth Wong, writer for Desktop Engineering Magazine, explores emerging Internet of Things (IoT) technologies that suggest the emphasis in product development is shifting from geometry to data acquisition and analysis and from geometry-based simulation to sensor-driven simulation. Wong featured Siemens’ Human Simulation tool and motion-capture technology from Siemens’ partner, Xsens, to explain new methods of data acquisition and ergonomic analysis. The following is an excerpt from the story, including quotes from Ulrich Raschke, director of Tecnomatix Human Simulation products.. The complete story can be found on Desktop Engineering Magazine online.

Replicating real human motions with digital models has been perfected by animators and game developers. The use of motion-capture suits propels the data-acquisition process to new heights. Xsens, a Netherlands-headquartered 3D motion-tracking technology developer, is hoping to improve the process with its gyroscopic suits. Xsens is a partner of Siemens PLM Software. The two work to make it possible to bring movements captured by actors in Xsens MVN BIOMECH suits to Siemens’ Jack and Jill.

“The suit from Xsens is a good example of sensor fusion. It involves gyroscopes, accelerometers, and magnetometers. You can put on that suit and start walking around,” says Ulrich Raschke, director of Tecnomatix Human Simulation products, Siemens PLM Software. “It’s a self-contained tracking system. With motion capture using markers and cameras, you’d have to worry about camera occlusion (the camera’s inability to see the subject with markers). With this suit, you don’t have to worry about that.”

Typical use of Xsens technology may involve, for example, having an actor perform or mimic a particular assembly operation or enter and exit a mockup vehicle. Ergonomists could analyze the movement captured in Siemens’ software to understand the stress and strain involved. If needed, the assembly process or the vehicle’s doors could be redesigned to allow a much more natural movement.

Ergonomic analysis has emerged as an important part of manufacturing process simulation. “When you’re designing something new, you don’t know how people will approach it. When planning for wire-harnessing for a plane, you may assume people will hold the wire and use a kneeling posture to do it. But then when you see the subject performing the task, you might realize people have a tendency to do it in differently. The data from the suit can be streamed directly to the Jack software in real time. So while the actor is acting out a task to see if he or she can reach for certain things, the software can calculate if, over a period of time, this action exposes the human employee to injury risks,” says Raschke.

Siemens’ Raschke thinks the manufacturing industry is on the cusp of something big. All the technology pieces are in place, awaiting a major transformation. “We already hold much of the information about the machineries in the plant, about the movement of the people, and so on. We’re on the doorstep of connecting those data and wearable devices,” he says. This article first appeared on the Siemens Digital Industries Software blog at https://blogs.sw.siemens.com/tecnomatix/tecnomatix-human-simulation-featured-in-desktop-engineering-magazine/