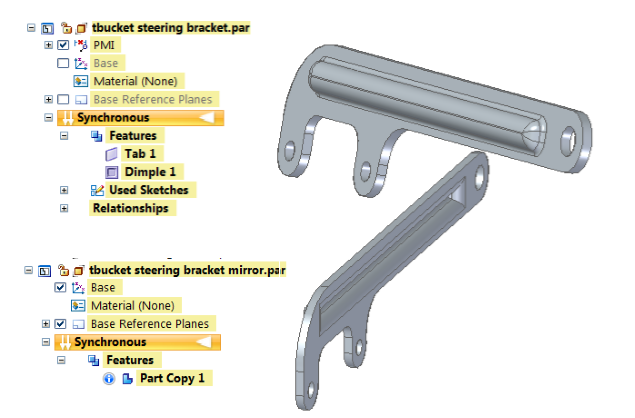 After two years, I’m still just a student of Solid Edge. I’m very often amazed at the power that’s in there. Of course there’s no way to learn something like just diving in and doing it, which is exactly what I’ve been doing recently. I’ve had help, of course. I don’t think I could have done any of this without Art Patrick and Dan Vinson.

As similar as this software seems at first glance to other Solid modelers out there, the details of how it gets things done are entirely different. This often means that some of the real power in there is stuff that old Edgers take for granted, but it doesn’t seem to see the light of day outside of that group.

On top of that is the fact that Synchronous Technology is still adding functionality, and the user community really hasn’t had time to develop the canon of wisdom that we have for history-based modeling.

With that in mind, I’ve got a couple of things I’d like to share here. Please forgive me if these are not completely novel ideas, but I ran into both of these concepts while working on modeling projects, and they seemed useful enough to warrant passing on in case there were others who hadn’t seen them or hadn’t seen the value before.

The first idea is to use Synchronous sketches in conjunction with ordered features. In particular I’ve used this with surface features. Here I’ve got a little video of using synchronous spline curves to drive a Bluesurf, with the splines being edited live, and the bluesurf morphing as I drag the points of the spline.

The second idea is that there is actually one feature in Solid Edge that combines Synchronous Technology and the idea of associativity. Generally, you would use Synchronous specifically to avoid the links between files that come along with associativity, but in the case of the Inter-Part Copy, when inserted as a feature into a Synchronous part, it will update. This is handy, and means that you don’t have to create a part in Ordered mode if it starts with an associative feature. In my case, I just copied a portion of a surface from another part as the basis for a new synchronous part. Now if my original part changes, my new part will also update.

Blurring the lines between complete associativity and link-free modeling allows you to manage your model better, and only take the hit of performance latency when you really need to. In other words – associativity is powerful, but it comes at a cost. This feature allows you to manage when you are willing to pay the (speed/performance) price to get the added functionality. So in this situation, when the Synchronous part changes, it will update the Ordered part.

This article first appeared on the Siemens Digital Industries Software blog at https://blogs.sw.siemens.com/solidedge/synchronous-and-associativity/