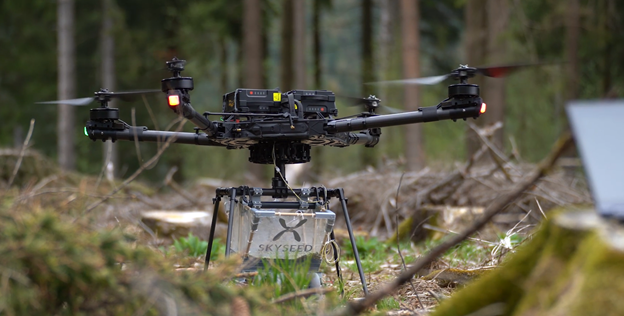 It is no secret that as humanity advances so does technology and the need for developing better and smarter solutions to make life easier. Unfortunately unlimited industrialization and dependence on oil and gas have contributed to the destruction of our forests.

It was after seeing more than 50,000 hectares of lost forest that Ole Seidenberg, the co-Founder of Skyseed, decided to combine technology with meaningful purposes.

Designed and developed in Germany, this drone is able to imitate nature as explained by Ole: “The tree as such also doesn’t bring the seeds to the nursery first and let them grow up, but drops the seeds on the ground. Many of them make it and become small seedlings and then eventually become a tree.” following that principle, the drone drops the seeds from a similar altitude to the trees.

The idea was first discussed among his drone-savvy friends, a few drone engineers who were also small-drone racing pilots, “At the same time, we come strongly from climate protection and technology innovation. We then linked one with the other.” says Ole.

But there was also the private component Ole´s co-founder, Dominik, was standing in the forest with his sons and they realized that the forest was so quiet and he then thought: “The forest is silent because it is dead. We need to stop climate change much faster than we can. Unfortunately, it’s quick to break it down, but restoring the forest is a slow process.”

It was just after they had started that they realized that they could not buy the existing ready-to-use pellets in the market or simply buy forest seeds (birch, pine, lark, silver fir) and have them pelletized by an already existing pelletizer.

As explained by Ole: “There are pelletizers, but they are mainly from agriculture. That’s a different application, so first of all, different grains and therefore a different size. But on the other hand, other things are also allowed, many materials are often not even allowed to be introduced into the forest soil according to the fertilizer ordinance and soil protection ordinance (Düngemittelverordnung und Bodenschutzverordnung).” This led them to develop their innovative pelletizing process and put it to the test.

By using a method called “Stratification” the seeds are just getting ready to go. Attending each tree’s specific need, they alternate temperatures around 0-5°C, where germination inhibition is broken down. Next, in April and May, the germination and growing on the ground began.

While this concept already exists in Australia, Canada, and the US, what makes Skyseed special is the use they give to their technology and how they developed it.

Shortly after developing the pellets, they had to prove that the product worked by developing the ejection mechanism. In Ole’s words: “Solid Edge helped us a lot to design it quickly. Funnily enough, the neighbor of our first investor is a teacher for mechatronics at a technical high school. He already used it for himself.” so they went ahead, built it quickly and tried it out. “This was essential for us. You always have to go out into the woods and test that. There are so many things that can go wrong. You can’t foresee them beforehand either without testing it.” explains the co-founder.

The development of their seed dispenser for the drones is what makes Skyseed so unique, it is called the “Seeder,” and it is currently in its second version. In addition, the “Superspreader” has been added, which is a device that has a spinning plate underneath, this helps to spread the material across the width.

The engineers at Skyseed developed four conveyors. Each of them presented its complication. The main idea was that they could run these conveyors at different speeds, unfortunately, that was too delicate and led the small seeds to get jammed quickly, even with pelletizing. Raphael, a student engineer part of the team, developed a completely different principle using Solid Edge, that works great, is much better and more robust, and has the advantage that it can be replaced, just like a printer toner.

The remaining challenge is to know how well this new part can communicate with the board electronics from the drone. “We can then set everything up on-site in one go and practically share the flight information with the drone via Bluetooth. Then the drone knows what to do and so does the drop. It should rotate so fast that this matches the flight speed and distributes the seed evenly.”

“The challenge was not to exert strong pressure on the pellets, but to accelerate them by centrifugal force and let them fly out.”

As this is something that has to fly through the skies and fall into the ground to be absorbed by it, it is essential to not create a thick coat around the seeds, that way, the seeds also get to where they need them and don’t get scattered by the wind. “The lighter, the more pellets you can take with you or send to the customer,” says Ole.

At this point, you might be wondering: How many trees do you get out of 1kg of seed? But the answer to that question varies depending on the seed type you wish to plant. Here’s an example explained by one of the masterminds behind Skyseed: with the forest willow herbs, where 1,000 grains weigh 0.005g. “They are so small that if you sneeze once, it’s just gone so you couldn’t distribute them without pellets whereas with fir or pine, as they come from the thick fir cones, they are much stronger. Oaks too, are also very thick. It can be that you have to apply 300-500 kg. With others, it’s done with 1 kg.”

“Scaling and consolidating what we have started. Getting pellet production to the next level.”

A big part of what they’re doing is still manual which slows down the process causing a significant delay, it normally takes a good day to pelletize one hectare of pellet mass, even with re-drying techniques, instead of hours. “We will purchase or lease them from the next round of financing. Then we will be able to produce properly. Then it’s a matter of increasing seed availability. Signing contracts with providers. Building our team. We’re not enough people to do that yet. Just being a reliable partner for forest owners. Of course, there are 1,000 different ideas and dreams of what else we can do.”

Here’s a video of the drone in action: [insert Skyseed’s website video] If you want to learn more about Skyseed, you can visit their website https://www.skyseed.eco/

Solid Edge Startup Spotlight: Flying through virtual worlds… March 10, 2021 During his time at the MIT Media Lab, Patrik Künzler came up with the idea of developing a chair that…
Solid Edge Startup Spotlight: 120km range, up to 6kg payload… March 7, 2021 Tom Plümmer is the co-founder of Wingcopter, an aviation startup from Darmstadt that has dedicated itself to the subject of…
Startup Spotlight: Speedbird's new drone design takes… August 2, 2021 It’s a bird. It’s a plane. No, it’s a drone—possibly one of Speedbird Aero’s drones en route to deliver pizza or medicine.…

This article first appeared on the Siemens Digital Industries Software blog at https://blogs.sw.siemens.com/solidedge/startup-spotlight-skyseed-the-first-aid-drone-that-helps-to-save-forests-from-industrialization/