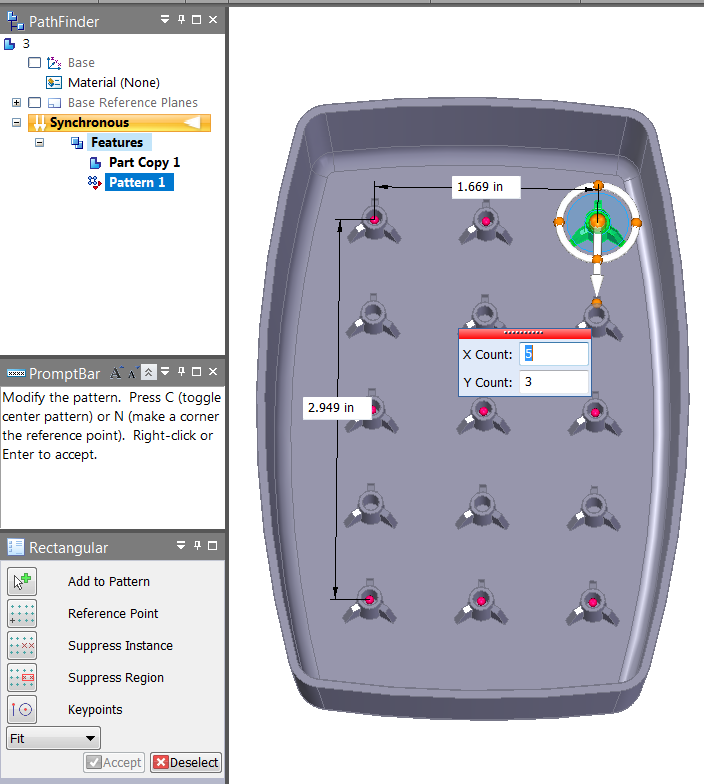 To use it, preselect a set of faces that you want to be the first instance of the pattern. Solid Edge will recognize both rectanglular and circular patterns, and will even recognize incomplete patterns.

If it recognizes a pattern, it will show a list of the patterns in a small table.

With this table, you can change the master occurrence or rename the pattern. You can also prevent Solid Edge from recognizing a particular pattern.

Once the pattern is recognized, it shows up as a feature in the Pathfinder, and can be edited like any other feature. You can change the spacing, number in X or Y and even suppress instances. The ability to recognize patterns of holes in previous releases was fantastic, but this adds much more value to what Synchronous Technology has to offer you. Working with imported parts, or just parts that were made by someone else a long time ago and the history-based design intent has been forgotten.

In my experiments, I was not able to get it to recognize a pattern of patterns, or sub-patterns such as the patterns of ribs on each of the bosses in the example shown above. I suppose that leaves us something to look forward to next year.

Still, for those of us who use Synchronous Technology, this just adds to the value we can derive from parts imported from other systems. And for those who don’t use Sync yet, it gives you one less reason…

This article first appeared on the Siemens Digital Industries Software blog at https://blogs.sw.siemens.com/solidedge/st8-like-me-synchronous-pattern-recognition/