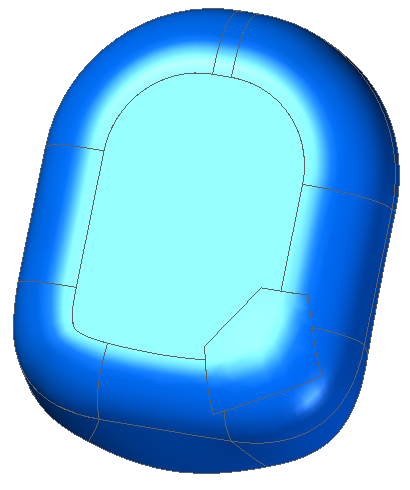 The propeller image in the teaser for this article is just a teaser for something you’re going to see later on from someone else. I’m gaining experience with the new and old features in Solid Edge by taking on some of these smaller modeling projects. We may get the community involved in some of these as well once things get rolling here.

One of the important areas where there was a lot of Solid Edge development in ST6 has been surface modeling and curves. There is enough material here for several blog posts, so for this one, I’m going to have to trim it down to what I feel are the most important new features:


By its very nature at this point, surfacing in Solid Edge requires an ordered workflow. This will be true until/if we ever get some sort of history free synchronous surfacing that can handle non-analytical complex geometry.

Let’s just jump in with these four new surface features and have a look.

The Redefine Surface to me is probably the crown jewel of ST6 new surfacing capabilities. This tool is meant to replace one or more (contiguous tangent) faces on a solid, surface, native, or imported model with a new single surface which you can add sections to, and edit the shape like a Bluesurf. You can replace a flat surface with one with some curvature. There are both Synchronous and Ordered versions of the feature, but the Synchronous version cannot be edited once it is created, so I would recommend using this in an ordered workflow, unless you never make mistakes ;oP

In this example, notice that the underside of the spatula handle is split into multiple faces. I want to add some shape to this and want to replace the three faces with a single face all in a single step. Here’s the workflow for the Redefine surface:

I should just point out some minor issues with the workflow on this new feature. The first thing I ran into was that it seems to skip over the Create Planes step, and you have to manually select it to go back and do that. The second problem might have been operator error or it might just be the way the feature was designed to work, but I was not able to edit each of the profiles without exiting the feature and coming back to edit the sketch.

Another enhancement in ST6 I’d like to point out here is the ability to make curvature continuous fillets. They look very nice. They are applied to the long edges of the Redefine feature in the image above.

Solid Edge has added a tool called Intersect in ST6. It is essentially a combination of surface trim and extend. I haven’t tested it on really complicated stuff (generally the more surface bodies the more complex the trim operation), but it has worked well when doing simple trims with just a couple of surface bodies. Workflow is very fast on this. Click each of the bodies involved in the trim, right click to accept, then click the portions that you want to get rid of, and right click to accept. It won’t let you completely eliminate a body, and you can use QuickPick to select hidden portions.

You start a ruled surface from the edge of a surface or solid body. The options are tangent, normal to face, tapered to plane, natural (which as far as I can see makes a tangent surface), and along an axis. These directions are referring to the direction of the straight U-V lines. One major limitation of this feature is that it does not appear to be able to accept edges that are not tangent to one another. So in the case shown below, to make ruled surfaces all the way around the purple revolved surface, you would have to make 4 ruled surfaces, then extend and trim them at the corners. Hopefully this will be corrected, since this is still a new feature.

In my test case, the Bounded surface didn’t fare very well. It has edge conditions for natural, tangent and curvature continuous. You can set the entire loop to have the same setting or set individual edges to separate conditions. There is no weighting for the tangency, so the faces being replaced in the image below appear to be rather deflated. Granted, this shape would have benefitted from some

guides. It works a lot better if just a single corner is removed and replaced, but replacing two corners and the area between them was just too much for it. This could benefit from some automatically created curves, like the new Redefine.

Solid Edge has added some nice functionality for surfacing and product design. Developing features in a new area is difficult work, and some of them may need a bit of tweaking, but I’m very pleased to have all of this new functionality. It really helps to build the foundation of more great stuff to come. I understand that not everyone gets as wound up about surfacing features as I do, but this sort of development will pay benefits in the future when the Solid Edge community in general welcomes a wider range of designers using a wider range of processes and materials.

This article first appeared on the Siemens Digital Industries Software blog at https://blogs.sw.siemens.com/solidedge/st6-four-new-or-improved-surface-features/