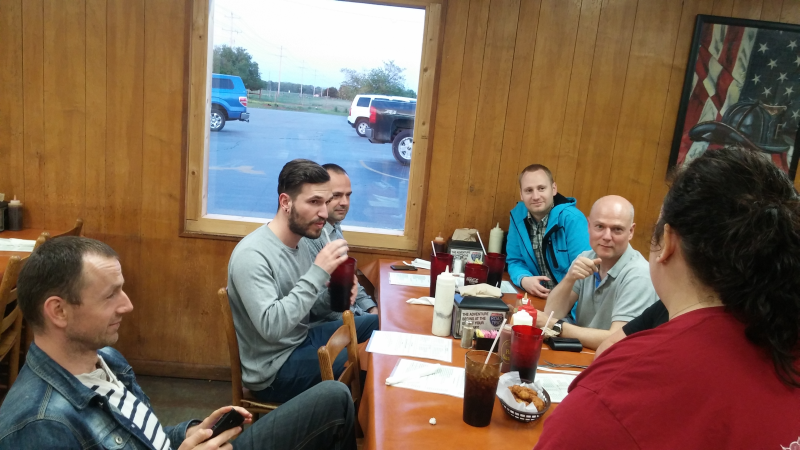 Solid Edge celebrated the 19th anniversary of its first release yesterday. Here is the initial splash screen from the first version It just happened that there were several of us at Huntsville taking a class on ST8 updates. From the forum Imre Szucs and I were there, along with other reseller employees from UK, Switzerland, Czech Republic and Hungary. Here is Imre’s picture from the forum of all of us at TGIFridays hanging out after class. I didn’t see the cake in there when I stole this image from Imre.It’s not a real cake, at least, sitting right there in front of it, I don’t recall it being there. Looks like a great cake, and I would have remembered that. Part of community is people getting together. Some of us have more opportunities to get together with other Solid Edge users than others, but this week has been my opportunity.

Solid Edge offices are in Huntsville, Alabama. Most readers will be familiar with Alabama as one of the prototypical southern states. Colorful characters, colorful accents, and colorful food. Huntsville stands out in Alabama as a decidedly high-tech hub with a lot of jobs in defence and space engineering. So here’s this city in the American deep south with a lot of well paid and well educated people from everywhere.

But step outside of town a few miles, back in rural Alabama, and it’s a different story.

Two nights ago someone had the bright idea to send a bunch of Europeans to the local barbeque shack for a taste of real Americana. Somehow I got caught up in this, and recognized it as an adventure that would surely be memorable if nothing else.

The Greenbrier is a barbecue shack a few miles out of town off the interstate. As soon as we got off the main road, we were surrounded by recently planted fields, and a lot of beef cattle. And a lot of open space. And big American pickup trucks.

Here the waitress is trying to explain hushpuppies, and what you use the cinnimon and brown sugar for. (your sweet potatoes of course) I was the closest thing to a “local” in our little group, but being a card carrying Yankee (from the northern states), a lot of this was new to me too. At least I knew about the sesquicentennial (150th) anniversary of the end of the US Civil War, which went by recently. Started feeling a little like a Gettysburg tour guide.

You might find more pictures of some of these events up in Facebook if you look. The intersection where the Greenbrier was located looked like the intersection in the movie O Brother Where Art Thou where Tommy sold his soul to the Devil. None of that going on this week, but we did get some great barbeque. (No gopher, Everett).

This article first appeared on the Siemens Digital Industries Software blog at https://blogs.sw.siemens.com/solidedge/solid-edge-community-celebrates-19-years-of-solid-edge/