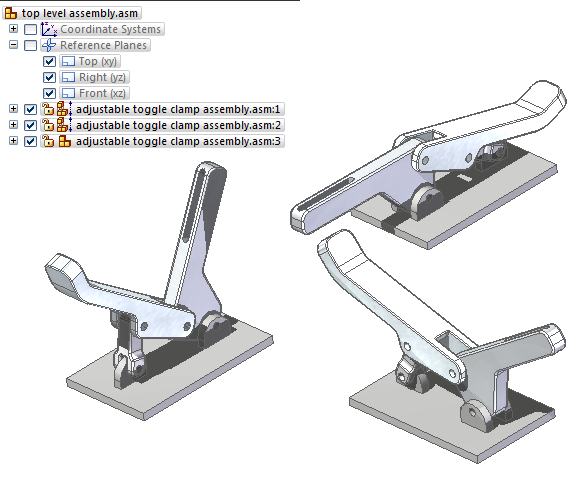 When you work on a Solid Edge assembly, you can move parts that are under constrained. So if a rotational degree of freedom is left  undefined, you can rotate that part while all of the other mate relationships are active.

There are some reasons for this, such as helping Solid Edge to be able to handle larger assemblies because it is limiting the number of mates that have to be solved at any one time, at a given level within the top-level assembly. Handling mates this way also makes motion more predictable – if you have too many open degrees of freedom, the motion you get when dragging parts around has multiple possible solutions.

Sometimes you need to access the motion in the subassembly at a different level in the overall product structure. If you have a hinge assembly in an upper level assembly of a door frame, you may need to show the door in its open state. Adjustable assemblies are how you do that. You may also have multiple door frames within an assembly of a building, so some occurrences may be needed in different states, such as open or closed or half open. The Adjustable assemblies function in Solid Edge gives you the option to determine the state of each occurrence of the subassembly within the top level assembly.

And just to be clear, you can see from the first image in this article that the opposite of Adjustable Assembly is Rigid Assembly.

I’ve put together an assembly using three occurrences of the same assembly, and made one occurrence adjustable. If you look at the icons to the left of the name of the subassemblies, you can see that they are all the same assembly file, but one icon is different. The first of the three has dimension arrows on it.  The cursor is highlighting this one, and it is highlighted in the graphics area. You can also see that the adjustable occurrence is shown in a different position than the other two. To take the demonstration one step further, in the screen capture to the right, I’ve made two occurrences adjustable, and you can see all three subassemblies are in different positions.

I realize that the example I’ve got here is a bit idealized, and you may never run into a situation like this in the wild. A top level assembly is usually made up of many more parts and sub-assemblies than just three occurrences of the same subassembly. When you place a sub-assembly into an upper level assembly, you have to make sure that sub-assembly is mated into place just like you would do if you were placing an individual part. If you add a sub-assembly without fully constraining it, make it Adjustable, and then try to move it, you may wind up with the entire sub-assembly moving in ways you didn’t expect. You can’t use the Ground relation. Solid Edge will tell you that the part is already grounded, which seems weird because it is moving all over the place – but it is grounded – in its own assembly. So you probably have to mate the grounded part into place using other parts or reference geometry in the assembly.

Just because you can make every subassembly an Adjustable assembly doesn’t mean you should do that. With every cool trick comes a cost, and you have to decide whetherwhatever trick you’re trying to achieve is worth the price you have to pay for it. In this case, the price is that all those mates or relations now have to be solved at the top level. If you’ve got a big honkin’ computer and a small assembly, you probably don’t have anything to worry about. But if you’ve got a huge assembly to manage, and a questionable network, or a marginal computer, you might want to think twice about what you’re doing.

Even though Adjustable Parts and Adjustable Assemblies are different in a lot of respects, they also have a lot of similarities. They are both excellent tools to use in the right situations. There is such a thing as too much of a good thing. I can’t tell you exactly where that line is, it will be different in different situations.

This article first appeared on the Siemens Digital Industries Software blog at https://blogs.sw.siemens.com/solidedge/solid-edge-adjustable-assemblies/